“It must be confessed that both ships were queer-looking craft, as grotesque to the eyes of the men of ’62 as they would appear to those of the present generation” 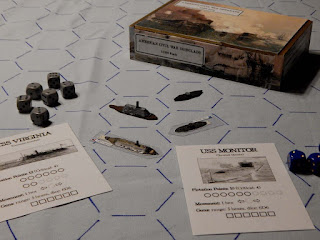 A few years ago I discovered Bob Cordery’s excellent Gridded Naval Wargames* and began using it to explore different naval battles. The rules for American Civil War ironclad engagements worked quite well on my initial try, though I modified the critical damage system slightly for a little more depth. At first I used basic hand-crafted 1:1200 models for the USS Monitor and CSS Virginia (what us Northerners commonly learn in school as the Merrimack), but as I dove deeper into ACW ironclad warfare, I sought to collect professionally cast models. What started in the “Before Times” prior to the covid pandemic has since expanded into a significant sector of my wargaming hobby. Thankfully I’ve found some good suppliers of models to fuel my habit.

I’ve always had a passing interest in naval wargames tied to my engagement with various historical periods over the years. When I was a kid my parents took us to visit several naval historical sites: the USS Constitution during our Boston vacation; the USS Massachusetts and other craft at Fall River, MA; and the USS Intrepid docked in Manhattan along the Hudson River. In my halcyon high school gaming days the local hobby shop stocked some Avalon Hill titles, so I picked up War at Sea and the light Naval War. More recently I’d picked up Avalon Hill’s War at Sea miniatures when they were readily available (as opposed to highly collectible now...) and played around with the rules, admiring the pre-painted if randomized miniatures in each pack. I also read and dabbled with Fletcher Pratt’s Naval Wargame focusing on the Battle of the River Plate.

But a visit to the Mariners’ Museum in Newport News, VA, right before the covid pandemic began my engagement with ACW ironclads. For the amazing admission price of $1 you can spend the day wandering the galleries filled with model ships, artifacts from American’s naval wars, a diverse collection of small watercraft from around the world, and, of course, the USS Monitor Center. Learn about the history of ironclad warships (like the amazing Korean “turtle” ship), experience the stories of those fighting at the Battle of Hampton Roads, walk through replica cabins, explore the forward interior of the CSS Virginia, examine artifacts retrieved from the Monitor wreck, peer into the vast wet lab tanks stabilizing the turret, engine, and guns, view the actual anchor, drive shaft, and propeller recovered and restored from the deep, and walk the deck of a full-scale replica of the USS Monitor. 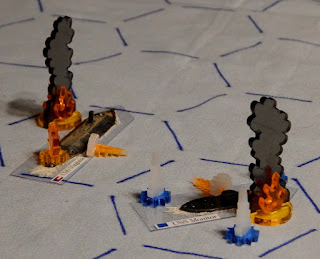 When we got home I started immersing myself in ACW ironclad history with an eye toward bringing it back to life on the game table. Osprey Publishing titles gave me a good visual and historical foundation. I reviewed Gridded Naval Wargames for ideas on what kinds of craft I might deploy. And I started looking for suitable miniatures to represent all the kinds of ships I wanted in my fleets. I’d seen a dealer at the Williamsburg wargaming conventions I’d attended – Toby from Thoroughbred Figures – and ordered a solid starter fleet, including the Monitor and Virginia as well as a few casemate ironclads, some other monitors, and some shore gunnery emplacements. I also ordered some relevant acrylic tokens from Litko to enhance the tabletop visuals: broadside markers to indicate which ships have taken their shots, mini splash markers to show which ships took hits, and mini blast markers to note critical hits.

When the owner of Thoroughbred Figures closed up shop for a while to recover from a motorcycle accident, I thought I’d lost my reliable source of ironclad minis. But I discovered another dealer – a friend from those Williamsburg wargaming conventions who’d opened a game store, Waterloo Games, near Richmond that somehow survived the pandemic’s tumultuous first year – and he carried Langton Miniatures’ line of ACW ironclads (among figures for other naval periods). Between the two I had plenty of ships to use for my own battles, played out on a spare piece of light-blue cotton canvas on which I stenciled a hex grid (thanks to S. John Ross’s HexPaper Pro font). I’ve since enjoyed a host of ACW ironclads battles, including one I ran at the local history museum last summer.

Overall I’m quite happy with the quality of both Thoroughbred Figures and Langton Miniatures. I decided to go with the 1:1200 scale (instead of 1:600 which some offer) for the compact nature and lower price; at some point I might get some 1:600 figures for the Monitor, Virginia, and USS Minnesota to craft a larger, more visually appealing experience for certain events for kids and interested newcomers to the wargaming hobby, but that can wait for now. The 1:1200 miniatures have quite a bit of detail, including some tiny fiddly bits for my fumbling fingers to assemble (aided in part by a magnifier and tweezers). Both lines look very nice, but Thoroughbred’s miniatures have more crisp features and delicate details. I’ve since bought more minis from both Toby at Thoroughbred Figures (now on his way to recovery) and Rob at Waterloo Minis (whose shop I finally visited).

Both Thoroughbred and Langton offer pretty comprehensive lists of historical ships for ACW naval gaming. That said, when I sought to recreate the Battle of Drewry’s Bluff, I discovered neither carried two ships I needed: the USS Galena and the USS Naugatuck. So I looked over some of my online wargaming resources and ended up at Brown Water Navy Miniatures at the Shapeways website. Searching the web revealed numerous people and platforms offering 3D-printed minis, even for something as seemingly obscure as ACW ironclads, but these looked fine on screen. When they showed up they seemed incredibly tiny (though they’re 1:1200 scale, so I don’t know why I was surprised) and made of light resin. So far they’re painting up fine, with good detail (though not quite as intricate as metal miniatures).

While I’m planning on running a Drewry’s Bluff scenario at a local historical venue at some point, I’m also preparing for a more immediate event on my calendar. Some of these new ships – and a new brown-water hex canvas – are slated for a fictitious river battle I’m slated to run at Call to Arms in Williamsburg Oct. 7-9. It’s my first wargaming convention since the pandemic began and its a new convention under new management, so I’m not quite sure what to expect in terms of attendance and interest in the game. I’ll use Gridded Naval Wargames, my go-to for easy-to-teach rules with my own added degree of depth (a more detailed critical damage table) that helps prolong the game and limit player choices depending on the damage. Although I’m starting to explore a new set of rules for ACW ironclads that might offer a little more depth and complexity....

“And now the great fight was on, a fight the like of which the world had never seen....”