Summertime brings the local public library’s inevitable Summer Reading program, with logbooks and prizes and entertaining programs for the younger ones…all intended to foster some sense that recreational reading has a place in our lives no matter our age. Many who fall into the category of adventure gamers have a love of reading that transcends incentive-based programs flogging kids to read for prizes. It reminds me of books I consider relevant classics of science fiction and fantasy that I haul out every other year or so and re-read like comfort food for the mind.

The Library of Congress recently released its list of “Books that Shaped America.” I didn’t expect to find many titles from the science fiction and fantasy genres, so I was pleasantly surprised to see two classic science fiction novels among all the fiction and non-fiction: Ray Bradbury’s Fahrenheit 451 and Robert E. Heinlein’s Stranger in a Strange Land.

One of those titles resides on my own very short list of novels I read over again periodically. Many people have favorite books they re-read now and then, in part because they offer enjoyment and because something within those tomes speaks to the frequent reader and appeals to their own character. When the Lord of the Rings films released, I recall Christopher Lee saying how he read the trilogy every year; since then I’ve noticed various other personalities have noted significant books they re-read.

I certainly don’t have time to read these once every year, but frequently enough over the years that they’ve influenced me in various ways. 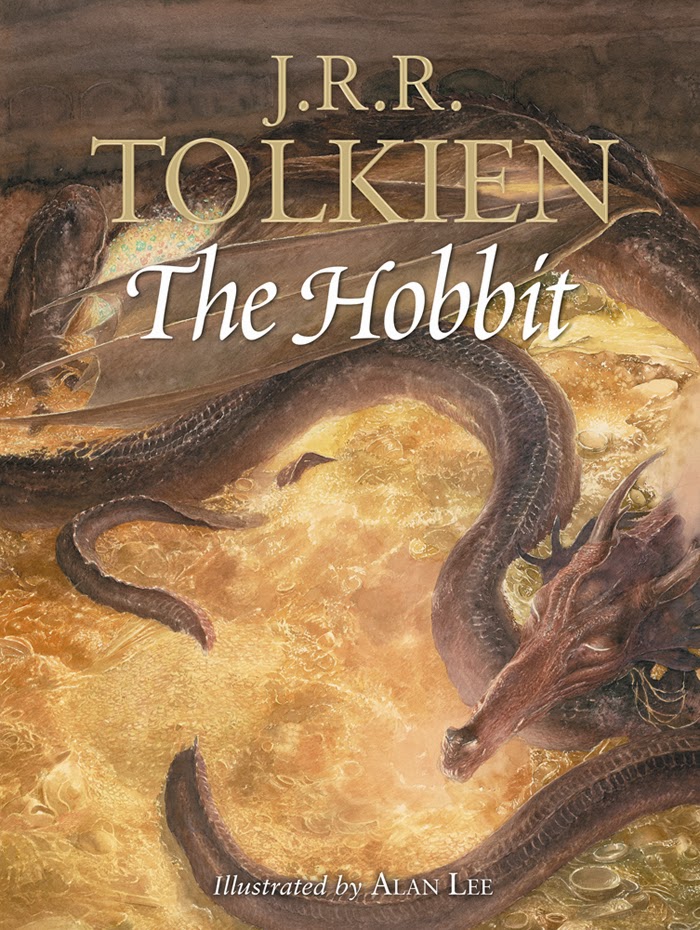 I discovered the J.R.R. Tolkien classic around the time the Rankin/Bass cartoon aired on television, and well before I read the thick, intimidating tomes of Lord of the Rings. With none of the overwhelming weight of the trilogy’s themes and language, The Hobbit still embodies for me qualities of the quintessential fantasy story: quest for treasure, the contented hero leaving home for unknown adventure, and a host of elves, dwarves, a wizard and a dragon. It’s written for children, though certainly in a narrative style better read aloud than to oneself (as I’m discovering slowly reading it to my toddler). On the surface it’s an enchanting fantasy story with all the expected trappings, perhaps one defining the genre like no other since Grimms Fairy Tales. On a deeper level it illustrates -- sometimes very blatantly -- how stereotypes can change (that of “burglar” and “thief” to hero), how greed, entitlement, and stubbornness lead to strife and tragedy, and how one can overcome self-doubt and temerity to rise to the occasion when the time comes. The Hobbit remains an enjoyable read that inspires the very roots of my interest in fantasy gaming.

I first read Heinlein’s classic way back my senior year in high school, when I took what many considered a semester-long “fluff” English course in science fiction. For me it wasn’t “fluff” since I was already heavily immersed in science fiction novels (and gaming) and had ambitious plans to write for the genre myself (though little did I suspect those publishing endeavors wouldn’t be in novels but roleplaying games). Whether one reads it as provocative examination of human nature, society, and spirituality or simple satire on life, love, and religion, it pushes readers to think and react to themes brought to life by rich and diverse characters, many of whom politely demand our compassion and respect: what is the divine, how far do we go in standing up to the establishment, how does religion shape society, is humanity on the right path? Each time I read it something new comes to the forefront, whether the concept of divinity in all (“Thou art god.”) to the ancient Martians lurking in the background, wondering whether humanity remains worthy of existence (and humans wondering if they’re really wondering that and capable of acting on it). Reading it becomes an exercise in challenging my accepted perceptions of authority, the norm, and belief.

A Canticle for Leibowitz

Unlike Heinlein, Walter M. Miller, Jr., published only one novel in his lifetime, A Canticle for Leibowitz. I recall reading it the summer before my senior year in high school, when I tore through mass market paperbacks of science fiction and fantasy from a local bookstore whose owner made sure he stocked all the books of series or authors in whom I took interesting (primarily Larry Niven and Michael Moorcock). I picked up Leibowitz for the post-apocalyptic setting; back then I lived in the waning years of the Cold War, where television movies like “The Day After” and other nuclear-war-themed post-apocalyptic fare filled the media with images of missiles raining atomic death into the lives of ordinary people. The book conveys a sometimes overwhelming pathos that, no matter what we learn from our past, we always seemed doomed to repeat it, if only with a few contextual deviations. Throughout the novel readers keep seeking hope that, maybe this time, humans can set aside their vices and selfishness and move toward something greater, the improvement and future survival of humanity; but ultimately it paints a bleak picture that humanity can’t, and won’t, change from its self-destructive tendencies, that even the influence of religious institutions cannot sway humanity from that course, though it might help in smaller ways.

Right now I’m busy reading my beautiful, illustrated edition of The Hobbit to my toddler in bits and pieces as his patience allows. Once his tolerance evaporates, it’s back to reading more toddler fare to reach our 20-book goal so the Little Guy can earn some cute prize from the Summer Reading Program….
at 3:46 PM