Revisiting the Random Dungeon with Themes

Several weeks ago I explored issues in random dungeons based on my own experience with the original Gygaxian method from the AD&D Dungeon Masters Guide and John Yorio’s No Budget No Frills Pencil and Paper Dungeon Generator, Ver. 3.0 over at the Tabletop Diversions blog. After my admittedly limited initial experiences I set off to devise a slightly more focused “random” dungeon experience incorporating an overarching theme for the delve and table results skewed to allow for some escalation from basic encounters to more challenging ones. 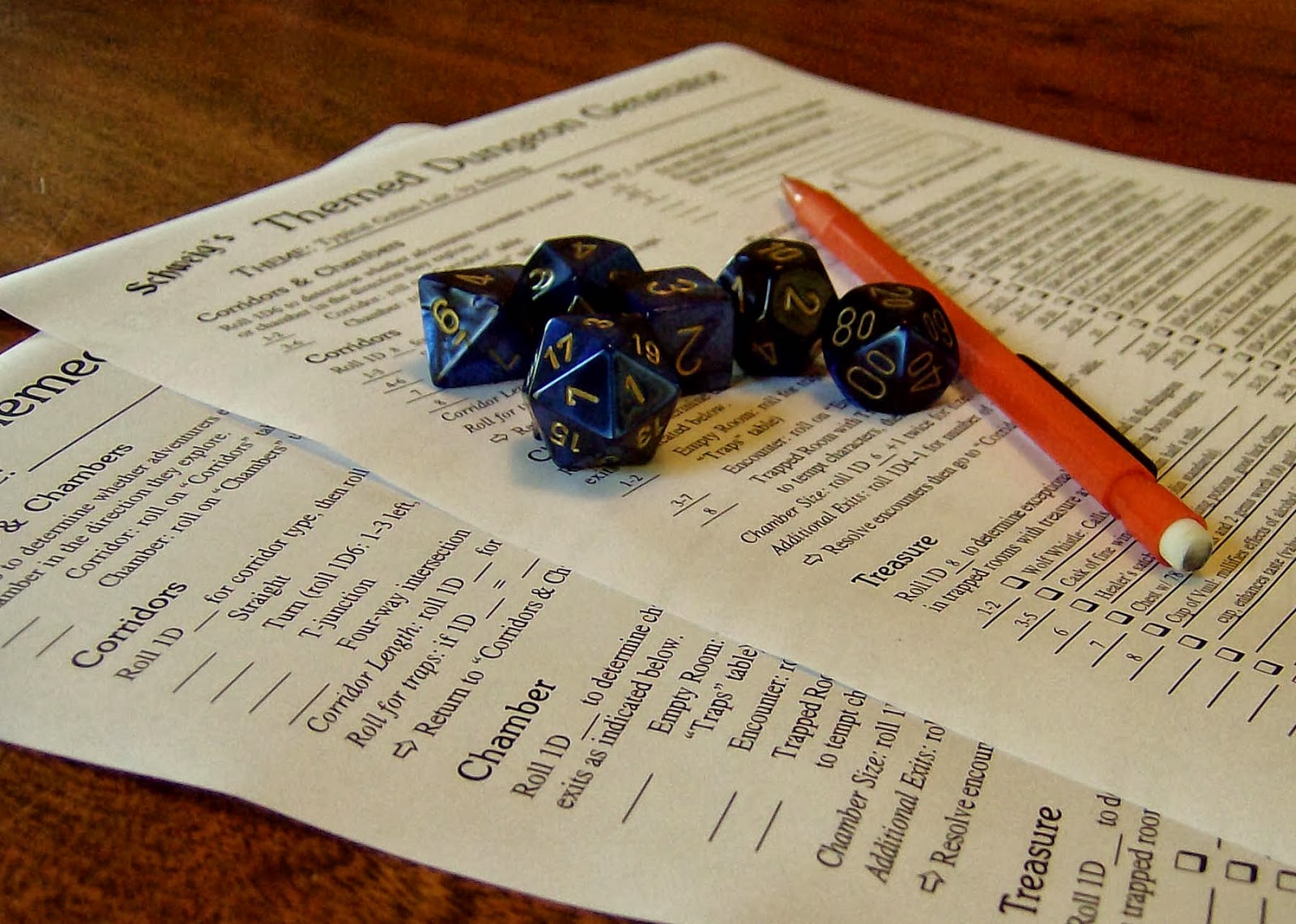 I wanted to structure a blank form outline with tables for determining corridors and chambers, traps, treasures, and encounters, with most of the die types and ranges left blank for users to fill in with their own preferences. For instance, choosing a 1D6 roll for determining corridors or chambers might allow one on a roll of 1-2 and the other on 3-6, skewing the results to favor a preferred structure. They could populate a trap table with theme-appropriate devices. Treasures could reflect the theme as well. But the most integral of all is the encounters table, where users “seed” the delve with themed encounters rather than relying on random monster tables by dungeon level. An escalation mechanic -- in the form of a bonus to the table roll equal to the number of previous encounters -- skews results to the higher and more challenging encounters, culminating in a showdown with an appropriately powerful “boss” monster.
The result is a PDF document with forms to fill out and then “save as” or print to create a one-page set of tables for a “themed dungeon” with randomized elements skewed toward a particular experience.
Here’s a look at the rationale I followed:
Intent: Since this serves as a side-project for me -- a quick jaunt exploring an interesting idea and game-design exercise -- I imposed a few restrictions on development. I wanted to keep the tables to one page with adequate room for users to customize the material with their own ideas. My urge to keep things relatively straightforward influenced me to leave out several traditional elements and interesting concepts; in some cases I’ve marginalized them from their more prominent places in previous random dungeon generators.
Secret Doors: Most random dungeon generators include some means of noting secret doors in passages and chambers. I overlooked this element in the interest of simplicity, though also partly to make sure the tables had more space for encounters, special treasures, and traps. I’m considering (and may have already implemented) a section on the “Chamber” table to account for the possibility of secret doors.
No Exits: A keen playtester noted the current “1D4-1” roll to determine the number of exits from a chamber could result in a complete dead-end in the very first chamber. I’ll alter the wording to eliminate that “-1” modifier until after explorers have visited four or six rooms.
Special Corridors & Chambers: I’d originally hoped to include results and additional tables for creating special corridor elements (stairs up and down, exits and entrances) and chambers (pillared halls, chasms with bridges) users could customize to the theme. At this point I’m considering including a “special” result on the corridor table with parenthetical suggestions for such remarkable features beyond the basic passageways.
Empty Room Table: The gamer community occasionally vents on the subject of empty rooms in dungeons, a result of random tables I personally found frustrating in my own solitaire delves. Unfortunately space considerations forced me to omit a table on which users could roll to generate some themed setting descriptions for trappings within empty rooms: abandoned shrines, barracks, common areas, or even caves with partially collapsed ceilings.
Take a look at Schweig’s Themed Dungeon Generatorand see how the system flows. I’ve included the blank, fillable form on one page and a sample dungeon on the second page to demonstrate how it might work. The document is still in flux, though I intend to revise it with an eye toward publishing it through my e-storefront at DriveThruRPG.com as a free/pay what you want product. For now it remains accessible from this blog post, though in the future the link will migrate to the e-storefront.
As always, I encourage constructive feedback and civilized discussion. Share a link to this blog entry on Google+ and tag me (+Peter Schweighofer) to comment.
at 6:34 AM