I occasionally like to highlight and discuss interesting game elements I notice, whether they can actually influence or inspire my own game design work. Collins Epic Wargames’ Spearpoint 1943 by Byron Collins impressed me with its multi-faceted damage cards and overall smooth interpretation of World War II tactical skirmishes in a card game format. Tasty Minstrel Games’ Coin Ageby Adam McIver incorporates an innovative mechanic in which the random elements determining what actions one can take also serve as the pieces one places, all on a “micro” map that can fit in your pocket. By sheer coincidence both games are running Kickstarter funding campaigns, though Coin Age’s ends in the next few days.
Spearpoint 1943 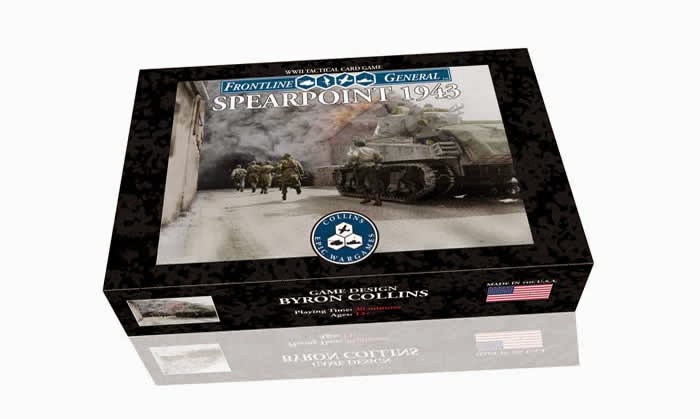 I first noticed this game while attending a small miniatures wargaming convention in Williamsburg, VA, where the creator was running demos. A friend who manages a comics and gaming store showed me a demo copy and was particularly impressed with the damage card mechanic, which, on first glance, offered a different damage complication on each of its four edges corresponding to one of the four unit types (infantry, tanks, aircraft, and artillery). I’ve had my eye on the game ever since -- in a casual sort of way -- but always hesitated at the $29.99 price tag. This past Thanksgiving Collins Epic Wargames had a Black Friday sale that, even with shipping, brought the game into my acceptable price range…so I ordered a copy that was promptly delivered two days later.
The game comes with 50 cards each detailing German and American forces, 25 command cards with advantages and special actions to play as the skirmish develops, and 25 damage cards. Players customize a force based on card points, deploy several units, then engage in combat. The skirmish game concept reminds me somewhat of what I’ve read about Up Front, the card game version of Avalon Hill’s venerable Squad Leader, though I imagine Spearpoint 1943 is a bit more streamlined than that hard-core wargame.
During the course of combat units can sustain damage in the form of points deducted from their endurance (a numerical value indicative of overall strength). Spearpoint 1943 employs an elegant little mechanic in which a card keeps taking damage throughout the turn, but at the turn’s end it defaults back to either full endurance or, if damaged below half endurance but not yet destroyed, then back to half endurance. Any unit taking more than half its endurance in damage also draws a damage card. Each edge of the card contains text for specific damage effects to one of the four unit types. Tucking the card beneath the damaged unit -- with the specific damage effect edge text showing -- also reminds players the unit’s now at half endurance.
Spearpoint 1943 also uses a few other innovative mechanics I like. The game requires players to commit crew cards when putting vehicles and artillery into play. This might seem like an unnecessary detail in a basic skirmish game, but functions as game balance for more powerful units. Players initially deploy only four cards, so a vehicle card and crew card to make that vehicle operational take up two card spaces that might otherwise go to two infantry units. In playing additional forces from one’s hand one must wait until both a vehicle and the associated crew appear when drawing from the reserve deck.
While the cards at first seem overly complicated with many different stats and the rules might seem a little overwhelming as players try to put together all the numbers and procedures, the mechanics work intuitively when everything’s put together on the game table. (I wouldn’t mind finding rules for solitaire play….) Although the interesting elements I admire don’t seem to fit into any games I’m developing right now, they’re certainly approaches I’ll keep in mind for the future.
Collins Epic Wargames is currently running a Kickstarter campaign to fund a version of the game set on the Russian front (the original Spearpoint 1943 covers tactical engagements during the campaign in Italy in 1943). While I’m not planning on backing this particular version of the game -- I’m not really a huge fan of action on the Eastern Front -- I’d love to see a version covering German and British skirmishes in North Africa in 1942-43.
Coin Age 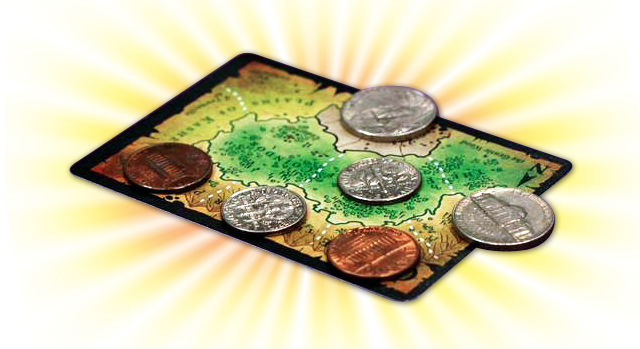 Billed as an “area control microgame,” Coin Ageconsists of a credit-card sized map with four similarly sized pages of rules; players provide the “pieces” using pocket change (one quarter, two nickels, three pennies, and four dimes for each player), though the Kickstarter campaign has already funded the stretch goal of a set of punchboard coins.
The game’s innovative mechanic involves using the coins not only as randomizers to determine player actions but as available pieces to place on the map to control territories. One player is “heads” and the other “tails,” enabling all coins to serve as double-sided counters on the board. Players “roll” (or more accurately “slap!” as demonstrated by the Kickstarter video) the two-sided randomizers (“coins”), with the combination of heads or tails to match the player’s side determining what actions the player can take: placing one, two, or three coins matching the player’s side, moving an already placed piece to an open territory, or even capturing an already placed piece and adding it to their “bank” of available coins to “roll.”
Players aren’t limited to placing pieces on empty territories; they can put a piece on an opponent’s piece on the board as long as the coin is physically smaller than the one upon which they’re stacking. For instance, a player might put a nickel on top of their opponent’s quarter, taking that territory as their own; but their opponent can re-take the area with a penny or dime on a later turn.
The game ends -- and the scoring begins -- after someone claims the last open territory or uses up all their coins. Scoring not only depends on who holds the most territories, but who has majority control of several “regions” consisting of one, two, three, or four spaces. Smaller coins score fewer points than the larger coins, which are already scarce within each players’ bank of available pieces.
Both the “randomizers as pieces” concept and the “stacking territory capture” elements appeal to me, though not for any game I currently have in mind. I could easily see rolling dice and using them with the values they roll as pieces of different strengths (and I’m sure someone’s already done it somewhere). Stacking pieces to capture areas from lesser-value pieces also adds a good bit of strategy to the game: if you make a grab for someone else’s territory you do so at a lower-scoring point value. (Hmmm, the stacking capture mechanic might work for a Gordon Relief Expedition game I’ve causally had in the back of my mind….)
I’m impressed and encouraged by several strategies in Coin Age’s Kickstarter that appeal to me as a potential backer:
Free PDF: Regardless of whether you back it, you can still preview and play the game for free with the PDF download rules and board available at the Kickstarter website. Try before you buy, so to speak.
Low Price Point: The minimum backer level (including shipping anywhere in the world) is a minimum $3, with a suggested “donation” of $5. When was the last time you paid $5 for a well-nuanced strategy game?
Stretch Goals for Everyone: The Coin Age Kickstarter campaign offers a veritable horde of stretch goals that apply to everyone backing the game. As of this writing people who back the game at any level get an additional map on durable “credit card-like” material, cardboard coin tokens (so you can save your change), stickers with the cardboard coin token design to apply to real coins, and -- yet to be unlocked at this time -- one or two additional maps! All this in addition to the originally promised main microgame board and rules. No add-ons or exclusive stretch goals for those backing at extremely expensive levels…just basic rewards for everyone to celebrate the game’s Kickstarter successes.
Support Our Troops: Midway through the campaign Tasty Minstrel Games added an extra backer level in which supporters could not only get copies of the game for themselves, but could also pay to have copies sent to troops overseas through the Operation Gratitude organization. [Edit: Kickstarter administration has since rescinded this pledge level as it supposedly violates their terms in not donating funds to charities...the exact wording and intent of which backers have debated -- and expressed their displeasure with -- at the Coin Age crowdfunding page.]
Ultimately I backed this project for multiple copies, one for myself and a few as gifts for friends.
As always, I encourage constructive feedback and civilized discussion. Share a link to this blog entry on Google+ and tag me (+Peter Schweighofer) to comment.
at 6:35 AM