This feature is the first of a few I expect to write examining some of the “gaming artifacts” from my earliest days in the adventure gaming hobby, the idyllic “Golden Age of Roleplaying Games,” the mid- to late 1980s. Oddly enough, my first “artifact” isn’t for roleplaying games at all, though my involvement in them led me to dabble in other hobbies, including wargames and miniatures.

When I first discovered Dungeons & Dragons in the spring of 1982 I suddenly found myself exposed to all kinds of related adventure gaming materials at the local hobby shop, in advertisements in the venerable Dragon Magazine, and at the one local convention I attended. Besides buying nearly every D&D rulebook and module I could afford I acquired several Avalon Hill games (both wargames and lighter fare) and a handful of fantasy miniatures. I also created my own adventures for D&D and a host of small board and card games to play with our neighborhood gaming group. So it shouldn’t come as any surprise that I found myself – soon after diving into roleplaying games – exposed to and designing miniature wargames. 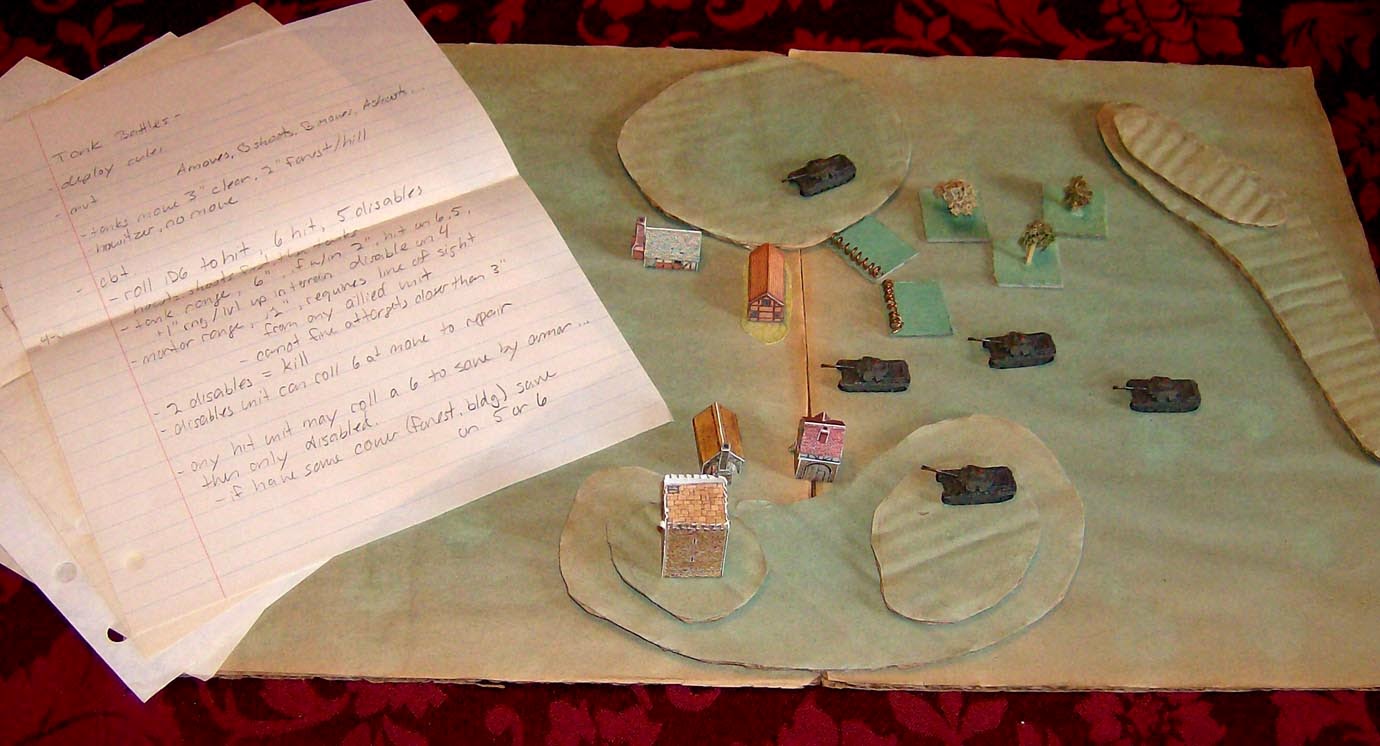 The tank game coalesced from a few components we acquired, some basic rules concepts about armored warfare, and a general interest in World War II tank combat. It didn’t have a catchy title beyond “Tank Battles” despite seeing several play sessions with both my brother and our neighborhood group.

The game was most likely inspired by two packs of 6mm “micro-scale” tanks I bought, each containing five tanks. I’m not sure where we found the minis; possibly PointCon, one of the first game conventions I attended, or maybe a forgotten corner of the late, lamented Branchville Hobby Shop which fueled my youthful exploration of adventure gaming. One pack was a set of GHQ Micro Armour “Centurion MK3 20pdr,” the other a pack of German Pkw IVs from another, less prominent manufacturer (whose name remains forgotten along with the location of the lost packaging). I gave them a very basic green paint job, with one side sporting red dots on the turrets, the other white dots (I wasn’t going for any degree of authenticity...we just wanted a simple tank game, not specifically a World War II game). The other components included a folding board consisting of two letter-sized pieces of corrugated cardboard with green construction paper glued to them; some cardboard-and-green-construction-paper contoured hill pieces, a few squares with “trees” (snipped toothpicks topped with crumbling modeling foliage moss, now hopelessly deteriorated); some rolled copper wire representing barbed wire; and a host of small card-stock European buildings from a cut-and-build book of my brother’s. I included a few small counters (and simple rules) representing infantry units and mortar squads, but those didn’t see much action on a board covered with hills, buildings, and cool tank miniatures. 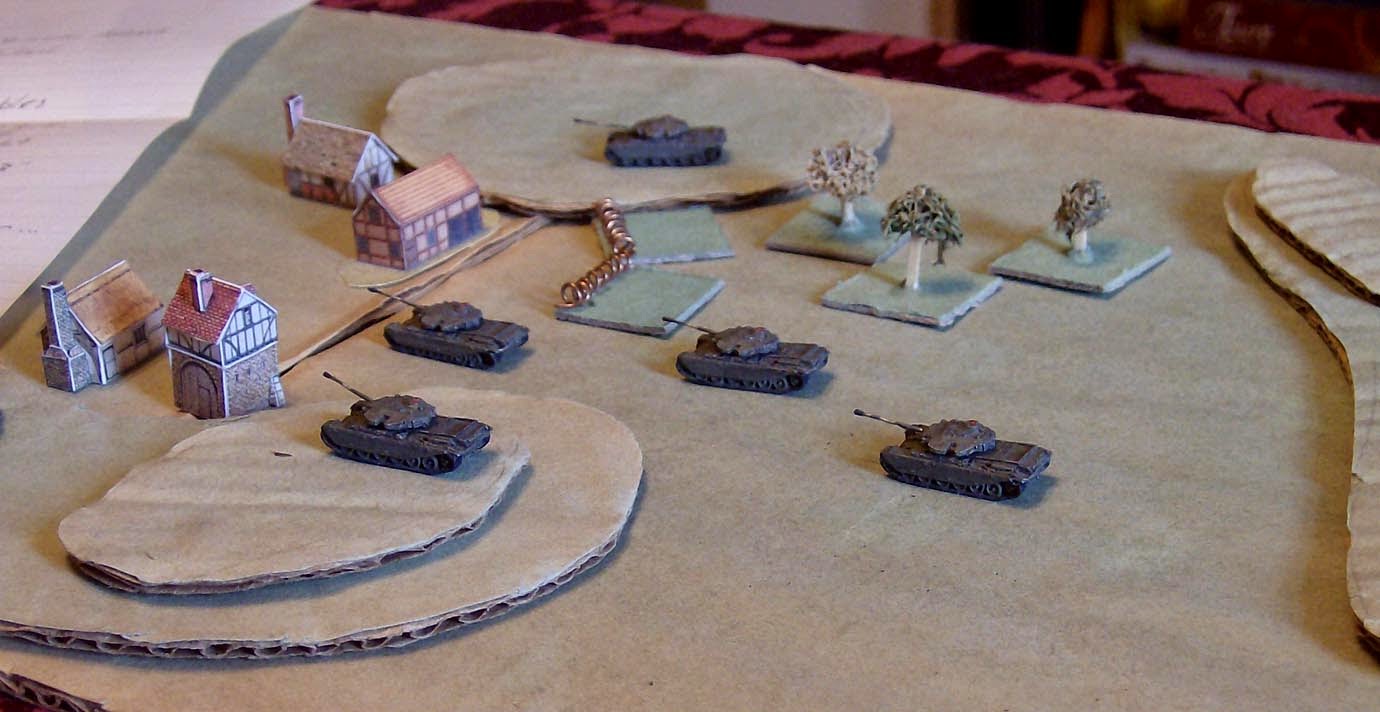 The rules consisted of a few pages of handwritten notes, my standard format for game materials in an age well before personal computers, scanners, and laser printers. The very basic system included a random set-up system on each player’s side (with a small chance of placing some units in forward positions), a shoot-then-move action sequence, variable movement, rolls to hit and saving rolls, and graduated damage going from “disabled” (no movement, with a chance to “repair” each turn) to destroyed. Some oddities included increased chances to hit at closer ranges, a range bonus for shooting from higher ground, rules that offered a bonus to save if in cover (though no penalty to hit), a lack of terrain modifiers for wooded areas yet slower movement over barbed wire (assumed to also include tank obstacles), and sketchy rules for using air support to go with two airplane models we found later. I didn’t include line-of-sight rules, but I recall we played under the assumption you couldn’t shoot a target you couldn’t see from the attacking unit.

I’d date these “artifacts” around 1984-86 when I was in my final high school years. I have faint and pleasant memories of playing it with my brother and other neighborhood kids when we weren’t indulging our interest in D&D or other roleplaying diversions of the time. Much of the actual game play centered on moving around buildings or trying to gain the high ground before blasting away at enemy tanks. Few games lasted more than half an hour from set-up to finish, but “Tank Battles” remained on of our favorites among the quick games we could play in an afternoon.

The game has since sat in its box on a shelf for years, though I recently raided it to mount and re-paint the Pkw IVs for use in other games (notably GHQ’s Beer & Pretzels Game – WWII Micro Armour, an introduction to the company’s own tank rules offered as a free PDF download; and my own development of Panzer Kids). The rules were simple enough I might try running it with my four year-old Little Guy – who’s expressed an interest in playing some of Daddy’s games – but I think we’ll put our efforts to more practical purposes and see how much of Panzer Kids he can comprehend. “Tank Battles” served its purpose back in my gaming youth, not simply as a break from roleplaying games but as a vehicle for my growing enthusiasm for and interest in designing my own games.