I recently received a Kickstarter campaign copy of Cheapass Games’ Get Lucky, the card game based on its popular Kill Doctor Lucky board game. The original game won the Origins Award for Best Abstract Board Game the year after its first release, and still remains available as a free PDF print-and-play download at the generous Cheapass Games website (though you can always leave a donation “tip” to show your appreciation). Seeing the card game version reminded me how much I’ve enjoyed killing Doctor Lucky over the years and made me happy to see many familiar game mechanic themes distilled into a compact yet strategically deep play experience. 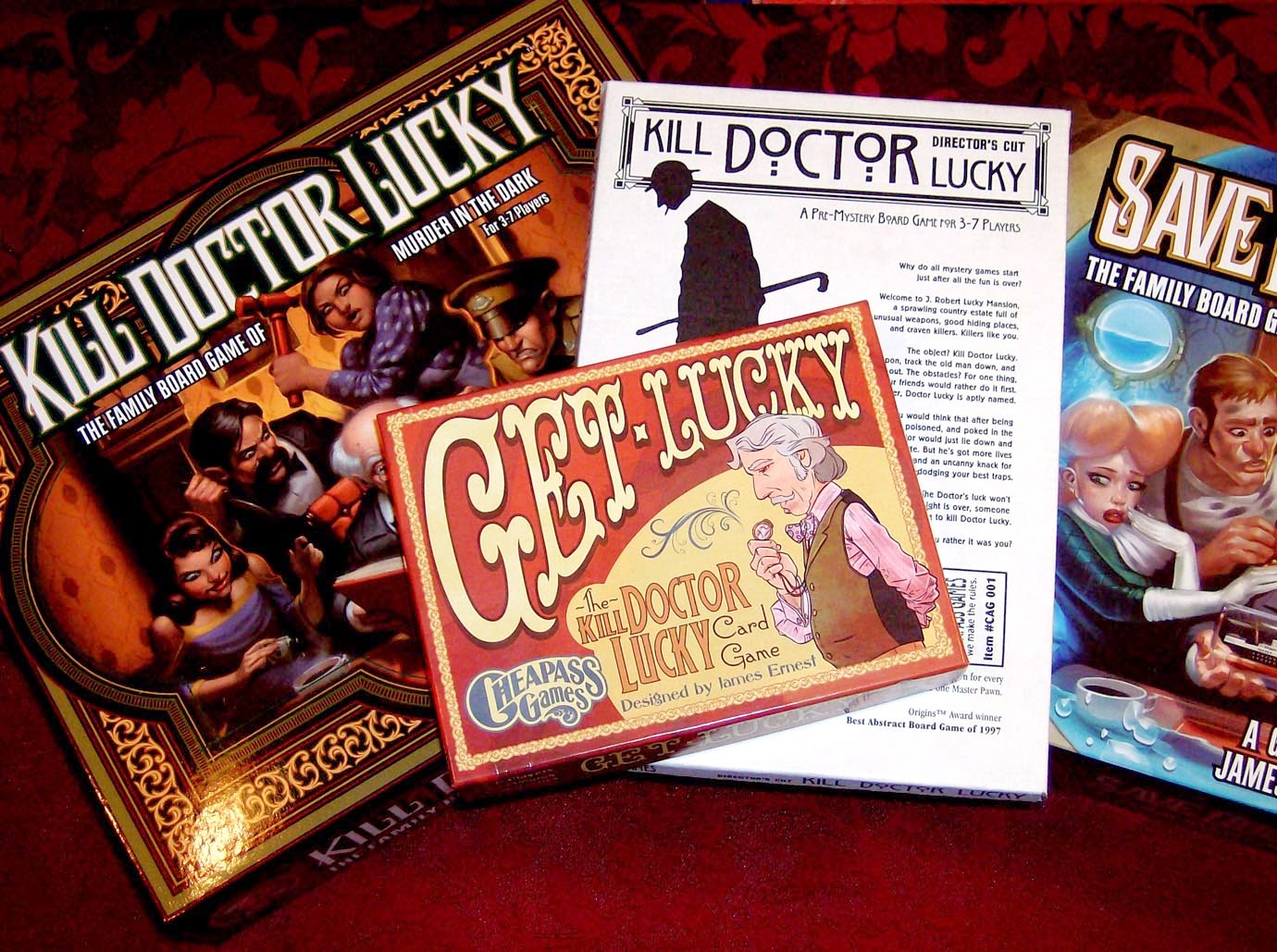 I can’t recall where I picked up my old “Director’s Cut” copy of Kill Doctor Lucky. It was, like many Cheapass Games of the time, packaged in a cardboard mailer box with a few separated cardstock map sheets and a host of hand-trimmed cards; players had to supply their own pawns and one for Doctor Lucky, a hallmark of the company that created games playable with pawns, dice, and other bits cannibalized from other games in players’ homes.

The original mechanics revolve around each player wandering through Doctor Lucky’s mansion, following the hapless fellow as he makes his way from one numbered room to the next. Players could, depending on available cards, move themselves or Doctor Lucky several rooms and hallways or to a specific room, search for items to aid their murder attempt (draw a card), or attempt to murder him. These attempts required no witnesses with a line-of-sight view into the room where the dastardly deed might take place, an extremely difficult feat particularly in games with many players; while the active player could use a weapon to increase their chances of success, others could play “failure” cards to stop this particular attempt with the hopes of killing Doctor Lucky themselves on a subsequent turn. While gameplay was extremely engaging – with players jockeying their pawns and Doctor Lucky around the board and nobody really certain who had the best chance to win until the very end – it became very frustrating setting up the perfect no-witness meeting with the old fellow only to have everyone else pitch in to ensure failure. With a host of players the game also seemed to drag on until someone made a murder attempt after everyone else had spent their cards canceling earlier tries. (An optional “spite” rule – made a regular rule in the deluxe edition – helped escalate the action by giving players a token for each failed attempt, which they could use as a +1 bonus on subsequent attempt or play as 1-value failure pieces to cancel someone else’s attempt.) Overall, though, the game has some wonderfully intuitive and intriguing mechanics, particularly the one where any player in a room into which Doctor Lucky moves immediately takes their turn, skipping other players in the normal sequence.

At some point in the past few years I bought the deluxe version of Kill Doctor Lucky produced by Paizo Publishing. While it’s nice to have cardstock pawns with stands for each potential murderer, Doctor Lucky, and his dog, as well as professionally produced cards, the wonderfully rendered, full-color, top-down map-board of Doctor Lucky’s mansion is so graphically detailed it’s sometimes difficult to determine which doorways lead where. Still, it’s good to have a quality, professionally produced game version of a beloved basic-publishing classic.

Cheapass Games also produced a “prequel” game in the Doctor Lucky series – with Paizo later releasing a slick deluxe version – that cleverly reverses many of the Kill Doctor Lucky rules and adds a keen escalation mechanic to keep the game from running too long. Save Doctor Lucky includes four smaller, elongated game boards depicting the decks of an ocean liner much like the RMS Titanic (complete with iceberg...). Players must save Doctor Lucky from the sinking ship so they can savor their intricate plots to murder him later. The game still uses similar movement mechanics as the original game, though “move” cards frequently offer the option of moving player pawns or Doctor Lucky a certain number of rooms or sending one or the other off to a particular location (rather than the separate “move” or “location” cards of the earlier game). In a suitable twist the draw deck is divided into four, each placed next to one of the ship's deck boards; players draw cards from the lowest deck, so when that deck of cards disappears, the ocean liner’s actual deck board also goes, sending any player pawns and Doctor Lucky up to the next viable deck. When all four decks are exhausted the ship sinks, the game ends, and everyone loses.

Cheapass Games recently ran a Kickstarter campaign to release Get Lucky, another game in the Doctor Lucky line. This card version artfully distills the essence of the original game, leaving the board behind and condensing murder weapons, locations, failures, and spite mechanics onto a 72-card deck. Instead of moving from one numbered location to another, the Doctor Lucky pawn (included) moves between numbered character cards. Players choose several characters who can try murdering the old fellow when he’s on their card (and players can trade out character cards as a turn action). Players can attach “upgrades” – motive, weapon, and opportunity cards – to their character cards for a +1 bonus in murder attempts; pairing one of those cards with the matching character card (indicated by similar numbers on the cards) gains a +2 bonus. Foiling murder attempts uses several new mechanics in the spirit of earlier games. Instead of playing separate “failure” cards, players can use motive, opportunity, and weapon cards that have one or two “luck” icons (four-leafed clovers) in the margin, the number of clovers indicating the value of the “failure” card. Anyone playing an upgrade card with a number matching that of the character attempting the murder automatically foils the attempt. Twelve “spite” cards also offer one-point failure options; in a nice escalating twist on past mechanics, spite cards detract their value from a character’s future murder attempts. All these options in the “failure” mechanic force players to make a choice: do they burn through their cards to stop a murder attempt now, or do they save choice cards to use later? And when the deck is gone, the discard pile isn’t shuffled and re-used, giving the game a shorter play time and an increasingly desperate tone as players scramble to get Doctor Lucky.

Cheapass Games and James Ernest – the creative genius behind many of its offerings – have a rich history of offering both affordable games where players provide their own pieces and entirely free print-and-play games. The company website offers links to read about and buy current titles, but provides a host of excellent games for free PDF download for those willing to produce their own print-and-play copies (for those seeking guidance in preparing such materials, James Earnest has even produced several instructional videos about cutting game cards and making tiles). Several games stand out from the host of free offerings, particularly the popular Button Men (with intriguing dice mechanics), Light Speed, Unexploded Cow, Take-Back-Toe – winner of Daniel Solis’ Thousand Year Game Design Challenge – and, of course, the free PDF download for the original, Origins Award-winning Kill Doctor Lucky. If you like the free materials, leave a “tip” in the form of a donation through the website.

The company continues developing and funding new games (primarily through Kickstarter) that incorporate intriguing game mechanics and engaging (if not outright humorous) themes. Cheapass Games might not have the same marketplace visibility and prominence in the collective consciousness of gamers as more massive adventure gaming companies, but it certainly deserves greater recognition for its excellent titles and generosity with free games.