B2 & X1: The Original Sandbox Adventures

The roleplaying game community has long waged a contentious debate over linear “railroad” and more free-form “sandbox” style adventures. For those looking for inspiration or guidance writing a setting-driven scenario – or who aspire to veer their adventure-writing styles toward such fare – the classic Basic Dungeons & Dragons modules B2 The Keep on the Borderlands and X1 The Isle of Dread serve as ideal examples from the earliest days of the adventure gaming hobby. 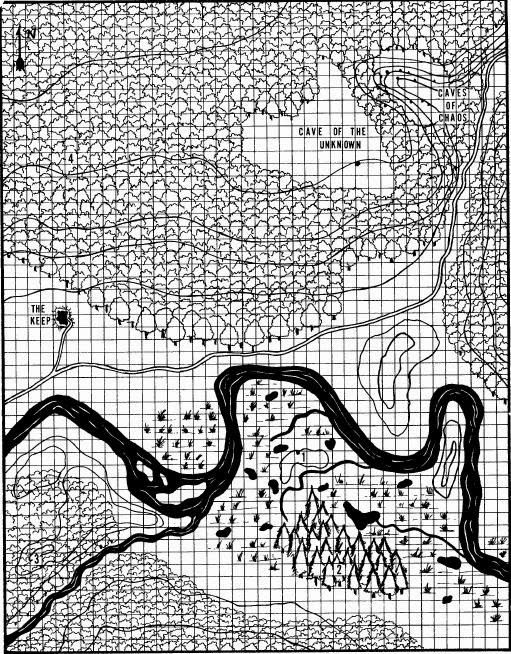 I’m guilty of writing what many might label “railroading” adventures, though I consider them more based on linear plots with episodic encounters that still allow for variable approaches from characters and some alternate outcomes (a point I’m sure loyal readers would love to argue); many games for which I’ve written use cinematic settings which focus more on plots rather than sandbox-style settings. As a writer I come from a more narrative, story-oriented background, a style I fall back on when visualizing and creating scenarios. In my occasional urge to broaden my horizons and try new things I found myself looking at the B2 and X1 D&D modules, satisfying early gaming experiences as filtered through the foggy lens of nostalgic memory – to see what elements made a good sandbox adventure.

One might more accurately describe this scenario dichotomy as those based on plotted encounters (necessarily linear in the style of a story) and others focusing on vast settings offering more freedom of action, with players and their heroes determining any “plot” based on their interaction with locations and non-player characters. Where the “railroading” adventure relies on plotted outline with encounters based on places and characters, the “sandbox” scenario creates a vast, interactive environment based on the premise that heroes might wander anywhere to encounter anything and anyone fitting the environment’s general theme. This requires a bit more development than fleshing out a story-based outline containing mostly the relevant locations and adversaries necessary to move action from one plot-point to the next. It’s not to say such adventures contain no plot at all; they present thematic environments for heroes to explore, working through encounters and exposing small plots along the way in more generally thematic rather than story-driven play.

B2 The Keep on the Borderlands offers a rich adventuring locale with three distinct elements: the keep, which provides a base of operations for characters and a “civilized” place for intrigues; the Caves of Chaos, a warren of demi-human lairs and a temple of evil for heroes to explore and clear out; and a few secondary locations for further adventures (the hermit, bandit camp, lizardman mound, spiders, and even something for gamemasters to populate themselves, the Caves of the Unknown). The environment offered players lots of options within the premise of seeking adventure on the wild borderlands: dungeon crawls through creature lairs, occasional forays into the wilderness (possibly to foil plots to destroy the keep), and interaction/conspiracy with the keep’s residents. I have vague recollections of character plots to break into the loan bank or private apartments to steal valuable items from the keep’s denizens, few of which ended successfully.

X1 The Isle of Dread flips the paradigm in in the Basic/Expert D&D format from dungeon crawl with surrounding wilderness to an entire wilderness environment with a few dungeon crawls. Combining elements from King Kong and The Lost World with typical D&D fare, it offers an entire tropical island to explore in what some might come to call the “hex crawl” style: the party of adventurers exploring one hex after another, clearing out wandering monsters, finding clues to fuel their interest, and resolving set location encounters. Along the way they find several mapped areas, including the climactic dungeon crawl at the center of the island. As in B2, X1 provides a native village as a convenient base of operations, though nothing as stable and secure as the good old keep on the borderlands. My gaming group of neighborhood kids didn’t spend too much time exploring the Isle of Dread; but we did put the two-page spread map of the Known World (later known as Mystara) to good use. Characters hired a ship and crew and spent after-school afternoons sailing the Sea of Dread, fighting off wandering sea creatures and exploring the disparate islands scattered between the Thanegioth Archipelago and the civilized kingdoms in the north. 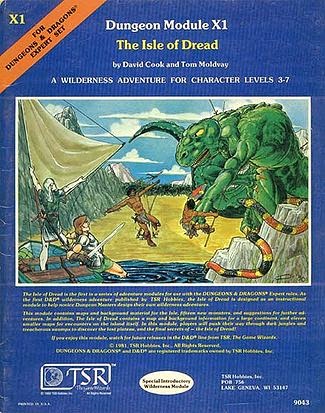 Both modules provide complete adventuring environments: a region to explore, specific locations (both broad encounters and detailed dungeons), and a base for resupply and recuperation (and perhaps some additional intrigue). Gamemasters have plenty of territory in which to create their own encounters. The modules make some assumptions about the heroes’ reasons to adventure in these areas – usually general exploration, conquest, and plunder – though some might consider these basic premises for involving characters in local quests “railroading.”
Still, once one gets past the premise for heroes entering a location, the encounters and dungeon crawls (and even wandering monsters) provide a structured environment for free exploration with a greater illusion of free will.

1) Start with an interesting region filled with potential scenario-hook locations and a general reason to explore it.

2) Establish a base from which the heroes can venture, someplace that provides a safe haven for resupply and recuperation, a home for interesting allies and covert adversaries, and a strategic asset to defend from enemies.

3) Populate the area with general encounters that don’t require a map (or can use a generic one); they should include one or two paragraphs of notes and necessary stats or references, but aren’t full-fledged dungeon crawls.

4) Create a few fully developed dungeon crawls. These might prove pivotal to a greater “meta-plot” of the region or might simply fit the area’s general theme.

As I’ve discussed before, the designers of the Pathfinder Beginner Box offered a briefly outlined environment focused on Sandpoint – the heroes’ base town – and its surroundings where the set’s initial adventures took place (both the programmed player and gamemaster scenarios); descriptions of a few other locations and a handful of plot hooks offered some inspiration for further adventures. In my own game-design endeavors, I’ve outlined (regrettably in text only, no map...yet) a region for my own future fantasy roleplaying game adventures; it includes a base and several broadly described locations, with the two as-yet unreleased dungeon crawls set there.

I’m sure many products since adventure gaming’s earliest efforts have followed their examples and offered exemplary adventuring environments. Most fall under the category of source material rather than adventure module. Setting resources like the Thieves’ World boxed set, the Cyberpunk 2020 Night City sourcebook, and the D6 Star Wars supplement Galaxy Guide 7: Mos Eisley come to mind, though they serve more to create rich adventuring environments rather than general and more detailed scenarios (though they’re rife with plot hooks). Perhaps such fare remains more appropriate to core or introductory products where designers seek to offer a sample adventuring environment representative of the kind of action the game strives to create. For those seeking more open-ended, “sandbox” play instead of plot-driven “railroading” scenarios, such formats can provide themed environments further defined by the characters’ explorations and the gamemaster’s creativity.