Polyhedral dice have a particular allure in roleplaying games, a subject I’ve explored before. So I’m particularly grateful I still possess my original polyhedral dice from my earliest roleplaying game boxed sets. I received the light-red dice with my Moldvay-edition Dungeons & Dragons Basic set – an Easter present from my parents in 1982 – with the yellow ones from the Expert set a few months later. Like most dice included in these boxed sets they feel unusually light, yet the edges wore down easily with only moderate play...and these dice saw lots of use. 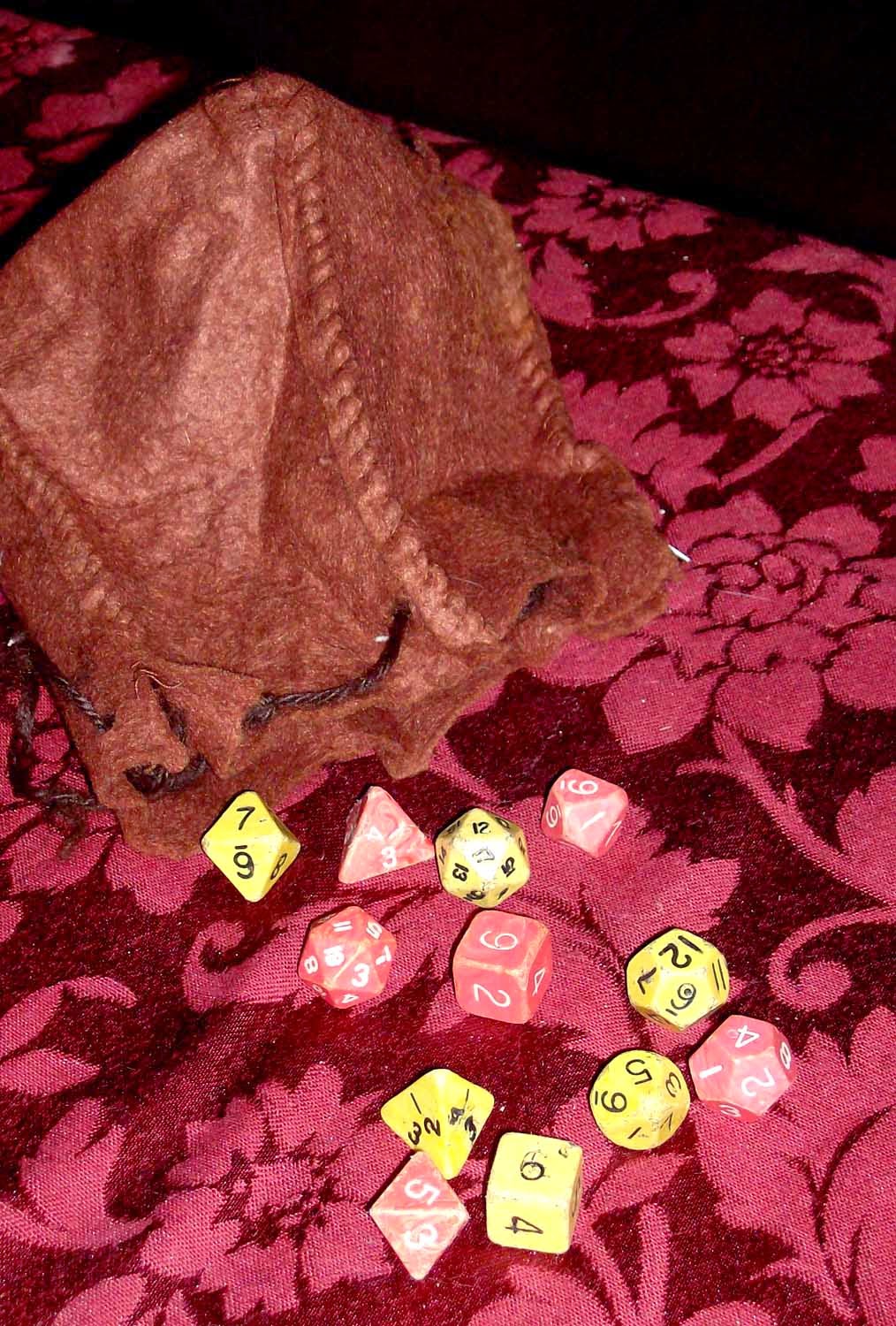 That first summer playing Dungeons & Dragons we loved rolling the dice, hovering over them to squint at the results and interpret how they’d affect the fate of our characters. The cheap crayons that came in each boxed set remained a mystery to me and those in our small neighborhood gaming circle. At the time I was terribly clueless about all the esoteric rituals roleplaying gamers in-the-know seemed to keep among themselves and scoff at outsiders trying to figure things out. Thus for a year or two we used dice without the numbers “inked in” with crayons or grease pencils...which actually enshrouded reading and interpreting the rolls that much more mystery.

After a while my brother and I found some nice “crystal” dice sets at the local hobby shop – I bought a set of “gemstone green” dice and he got some “caramel brown” dice – though I’m not sure their seemingly precision edges indicates they were the famous Gamescience dice (I wouldn’t have known about the distinction at the time). Unfortunately these slick-looking dice have since become dispersed among several dice-storage containers (some might even have been lost!) and hence do not reside within the hallowed dice bag of my youth.

I don’t know where I picked up on the idea of having a bag for one’s dice, but I understood that particular piece of gamer lore early on. Maybe I picked up that various illustrated characters in the Basic and Expert D&D rulebooks used such pouches to carry their coinage and thus it seemed to make sense to use an appropriately medieval accoutrement for toting dice. I fashioned my own bag from brown felt scraps and yarn; it withstood years of active use and years in storage with a little wear and tear. These days I use a variety of containers to hold dice for various games, including fantastic dice bags my wife occasionally makes.

I’ve continued collecting dice throughout my gaming career, though perhaps not as addictively as other gamers. Since most of my gaming has been with various d6-dependent systems, I have an uncountable host of six-sided dice. My favorite ones include some deep bluish-green ones with an Egyptian-style scarab for the “one” face; some tan Flames of War dice from Battlefront with the Africa Corps logo on either the “one” face or the “six” face (always have to check); the round six-sider with a hollow cube interior and a weighted ball so the die lands with one result facing up on its spherical surface (a small gift from science-fiction author friend Timothy Zahn); a hefty handful of Fudge dice an old friend gave me which I infrequently (yet recently) use; a brass die that sits on my desk as a paperweight and rarely sees any gameplay; a set of “Pizza Dice!” Flying Buffalo offered long ago (and might still sell) to properly randomize topping choices; and the red-with-gold-specs I ordered a few years ago with the Griffon Publishing Studio name and logo on the “one” face. Oddly enough during gameplay I prefer using solid-color sets of dice: usually red with white pips for basic rolls, with some smaller sets of dice to keep track number of opponents, hits, rounds, or other quantities during the game.

Since I don’t play too many D&D-style games much anymore I don’t have many favorite polyhedral dice sets. I’ve kept several I acquired over the years, many as swag or trades during my years with West End Games when I had some professional acceptance from other publishers, manufacturers, and game designers. I recently (in the past three years) picked up a cobalt blue polyhedral dice set with gold-inked numbers I find particularly striking. One of these days I might give a D&D-style game another go given the current preponderance of D&D Next/Fifth Edition, Pathfinder, and Old School Renaissance material.

I always marvel at dice dealers at conventions, their vast displays of every size, color, design, and shape, and the inevitable bins from which gamers can scoop mug- or pitcher-fulls of dice for what seems like a bargain. Despite my frugal nature regarding purchasing excess dice – “excess” since I seem to have some many already – I inevitably buy a few at each convention, either to add some remarkable new find to my collection, give a novel gift to gamer friends, or replenish ones that go missing (one of my favorite scarab dice seem to disappear occasionally).

Dice dealer displays always amaze me with the seemingly infinite multitude of different symbols one can put on dice – states, animals, dinosaurs – plus the different kinds for determining hit locations, direction, and even random dungeon geomorphs (which I haven’t seen in person but would love to get my hands on). If I weren’t so frugal with what little discretionary gaming cash I have, I’d probably buy more dice that appealed to my personal tastes and gaming preferences. I’ll admit recent buzz about WizDice online (as featured by Tim Shorts and Dyson Logos) has me interested; 100 dice for $20 sounds like a fantastic deal, considering folks generally receive several full sets of matching polyhedral dice. It seems like a very fun idea for gamers, so I went ahead and put it on my wish list. Who knows, it might get me playing more fantasy roleplaying games.

So many games use dice it’s only natural for gamers to spend so much attention – and money – on one component that reflects their personal tastes. Some brag about the quantities, others showcase particularly nifty looking dice, and everyone seems to have a favorite dice-related story to share around the gaming table.

Comments....
What are your favorite dice and why? Want to offer feedback? Start a civilized discussion? Share a link to this blog entry on Google+ and tag me (+Peter Schweighofer) to comment.