After posting “Celebrating Solitaire Play” two weeks ago I immediately thought of several more recent solitaire gaming endeavors worth noting. With the current increased interest in all aspects of adventure gaming – and the boom in new material available to consumers – I’m encouraged to see a plethora of innovative solitaire-appropriate games reaching the market.

As with the previous list, I own and have played a few of these, while others I’ve simply heard about. This by no means constitutes a comprehensive review of all such materials; feel free to read the “Comments” blurb to the right or at the end of this piece to make your own solitaire game suggestions:

Battle over Britain: This game came to my notice thanks to some solitaire gaming discussions over on Google+. Someone recommended it because it offered a solitaire play option, though the website description mentions it almost in passing. After looking over the Minden Games website and downloading a free game PDF, I decided to order a copy of this game and give it a try to indulge both my enjoyment of solitaire games and my interest in this particular aspect of World War II. Despite using a deck of playing cards for an innovative system to determine which pilot has the advantage, Battle over Britain’s mechanics felt like a traditional chit-and-board wargame, with plenty of tables and the fate of units hanging on single die rolls. The game’s rules and tactical scope make it far more accessible than John H. Butterfield’s strategic RAF solitaire game published long ago by the late, great West End Game, and plays in a fraction of the time (though one can also engage in campaign play).

Dungeon Roll: I supported the game’s Kickstarter campaign because it looked like a fun, push-your-luck game with lots of dice rolling and a fun dungeon-crawl theme. Group play consists of each player taking a turn to explore a dungeon, defeating monster dice with combinations of party dice, bagging any treasure, and completing the “level” before the monsters overtake the delvers. Each player gets a “hero” who allow players to use or alter the dice differently in certain situations, varying gameplay between those in a group or single players between sessions. With little interaction between players, the game seems designed more for solo play with a competitive scoring aspect allowing group players to evaluate their progress relative to others. Whether alone or with a group, Dungeon Roll offers some light diversion with a popular fantasy theme. 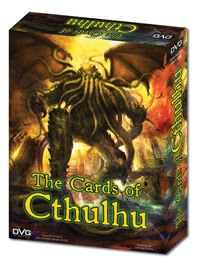 The Cards of Cthulhu: This was another project I backed in the Kickstarter phase primarily because it was billed as having strong solitaire playability...and well, Cthulhu. It’s very much like playing a card game of solitaire, except with some dice mechanics, resource cards, and the constant threat of losing your sanity. Each turn more minions show up on the four boards representing the imminent arrival of Cthulhu and the Elder Gods; players desperately try to budget their actions to dispel them and seal the gates through which more horrors pour...gates which keep reappearing! Out of the four games I played, I lost three handily and won a single match only by using the “easier” rules allowing for a smaller initial draw of cards each turn. The gameplay truly captures the futile struggle, the unspeakable and never-ending horrors, and desperate race against insanity typical of the Cthulhu Mythos.

Zulus on the Ramparts! I’d heard a little about this game yet foolishly passed up an opportunity to buy a copy of the first edition at a convention a few months back. Now the second edition from Victory Point Games sits atop my Amazon wish list. Late Victorian wars remain another area of interest for me – Zulus, Egyptians, and Dervishes – so a purely solitaire game based on the famous Battle of Rorke’s Drift with a purported 25-minute playing time seems extremely tempting. I know very little about the gameplay or mechanics; a quick perusal of the rules PDF one can download from the website gives me the impression of a very involved, crunchy system typical of may chit-and-board wargames along with some added complexities related to the various components (all of which look very nice, including the rulebook itself). Anyone have experience playing it?

Scenes of Chance: Roleplaying Adventure Companion: Last but not least, this recent Kickstarter-funded project promises a deck of oversized cards, most of which show visual scenes of locales along with a few choice icons to show what characters might encounter there. Each icon has a corresponding random table (on a separate card) so the gamemaster can roll 1d20 to determine what’s there; cards include multiple icons based on the setting, challenges, weather, and potential rewards. When used in conjunction with some other solo roleplaying tools like gamemaster emulators and Rory’s Story Cubes, Scenes of Chance could provide some setting and encounter situations without programming or planning on the player’s part.

I have, no doubt, overlooked many other worthy solitaire titles across the various genres of adventure games in the hobby. The topic remains a frequent interest for me and a notable offshoot of traditional group game design.


Comments....
Have suggestions for solitaire games or solo gaming techniques? Want to offer feedback? Start a civilized discussion? Share a link to this blog entry on Google+ and tag me (+Peter Schweighofer) to comment.