My Favorite Flavor of D&D

Recently I’ve been seduced by all the buzz about the Old School Renaissance (OSR) games that hearken back to the earliest editions of Dungeons & Dragons in their mechanics and presentation. I’ve acquired a few print copies of various games and source material (including some quality ’zines). It’s all fueled by an interest in returning to my medieval fantasy gaming origins and thus to the nostalgic origins of my immersion in the adventure gaming hobby. While I appreciate a number of the OSR games I’ve seen – most notably Old School Hack, Basic Fantasy, Barbarians of Lemuria, and Swords & Wizardry WhiteBox rules (admittedly not all hardcore OSR) – I find myself returning to the original source of my early wonderment and inspiration in gaming: Basic and Expert Dungeons & Dragons. 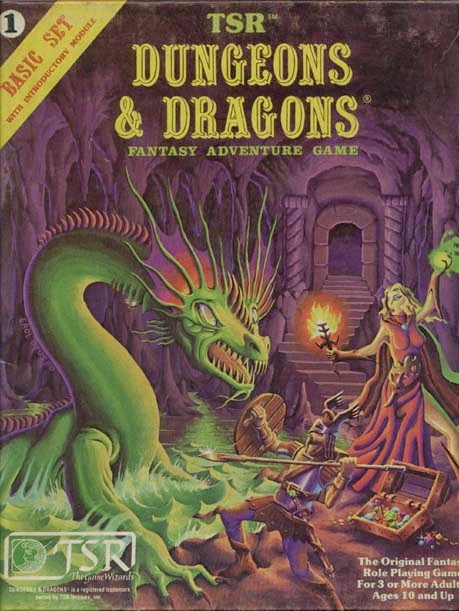 Aside from the game I designed myself based on watching two friends muddle through some rooms in B2 Keep on the Borderlands, I started with the Moldvay-edition D&D Basic Set (received as an Easter present when I was 13); I quickly expanded my gaming activities that summer with the Expert set. Although I soon got the triumvirate of core books for first edition AD&D, most of my earliest gaming focused on Basic/Expert D&D. I certainly bought into the AD&D game line, playing several games and often borrowing scenario material for my own D&D experience, but I often felt AD&D had far too many rules and, as the line progressed under TSR, far too many supplements defining in detail various aspects of the mechanics and settings.


I’ve explored other editions, mining them for ideas. I still have my first edition AD&D materials – several hardcover tomes of rules, numerous modules, a few supplements – and keep them for sentimental and archival purposes. I didn’t feel so attached to second edition AD&D; though I had the triumvirate of core books I sold them long ago and never played more than one or two one-shots. I bought into third edition, particularly to see what Wizards of the Coast did with the game after acquiring TSR, partly because I was interested in writing for the slew of Open Game License d20 material that quickly flooded the market. Fourth edition didn’t catch my attention, and I considered buying into fifth edition – well, the beginner boxed set, anyway – but overall it has failed to really capture my attention, even with major portions of the rules available online for free.

Certainly every edition of D&D offers something new and worthwhile to gamers. Sometimes it’s the approach and production values, other times it’s innovative mechanics, setting, and character elements. I found second edition’s approach to monsters – releasing loose-leaf sheets to collate into a binder – a novel means of expanding the bestiary and allowing players to organize it into one massive tome. Third edition introduced an intuitive skill system and a specialty feat mechanic, plus an overall incorporation of computer game feat, skill, and character progression. Fifth edition used fan and consultant input to craft what the publisher felt was a game catering to as many aspects of the roleplaying gmae population as possible. Certainly the Open Game License (OGL) that released at the time of third edition changed the entire face of adventure gaming publishing and opened the market to third-party and fan-created materials...a legacy that continues 15 years after it’s initial appearance.

My fondness for Basic/Expert D&D and my interest in giving it another try doesn’t simply stem from nostalgia. Those two rulebooks include several elements I still find appealing today:

Complete Package: Each rulebook in the Basic/Expert game contains all information to play, from characters and spells to monsters and treasure. Sure, additional rulebooks like the Companion rules expand on this and provide additional reference information, but they’re only necessary if you’re venturing into the realm of those higher levels. At the time (the early 1980s, or what I like to call “The Golden Age of Roleplaying”) the full Advanced Dungeons & Dragons game consisted of three large tomes, one for the players, one for the gamemaster, and one packed with monsters; subsequent editions followed the same rules triumvirate approach, requiring players to buy access to all three to truly appreciate the game. TSR eventually gave the D&D games the expansive treatment with numerous supplements and boxed sets, mostly based in settings and not as much in rules. Fans hold the D&D Rules Cyclopedia designed by the late, great Aaron Allston in high regard for consolidating rules originally presented more than four books (Basic, Expert, Companion, and Master)...one of these days I’ll find a copy for my own shelf – or a mythical B/X D&D combined rulebook rumored to exist on Lulu – but until then I still turn to my well-read Basic and Expert rulebooks.

Concise Mechanics: I like simplified mechanics with plenty of room to customize or adjust, instead of volumes of rules, feats, and other fiddly bits. Basic/Expert D&D hits the mark on these concise elements, such as succinct lists for spells, weapons, equipment, and treasure, plus treating fantasy races as classes (I found separate class and race as an additional layer of complexity even though it offers more character options).

Graphic Design: I find I prefer the Moldvay-edition Basic/Expert D&D layout and smaller rulebook approach over AD&D’s sprawling tomes and tiny print. Yes, I have been critical about Basic/Expert D&D’s graphic design in the past, but compared to other efforts of its time – especially the original D&D digest-sized books – it’s a clean, simple layout punctuated by polished artwork. Overall I found the illustration quality in Basic/Expert D&D far more professional and prevalent. In both the Players Handbook and the Dungeon Masters Guide the art pieces were few and far between; in Basic/Expert D&D the artwork served as a subconscious “bookmark,” reminding me thematically where to look when flipping through the rulebooks for particular information. While I love most of the artwork, perhaps those pieces by renowned artist Erol Otus remain the most iconic.

Room to Grow: The rulebooks left lots of room to grow in terms of setting, characters, and mechanics. Like AD&D, it provided a framework to guide players in making rulings instead of providing exhaustive, exacting rules for every possible situation, an aspect celebrated by the burgeoning OSR movement. Nearly every group for nearly every roleplaying game has its own set of “house rules” to adjust the game to enhance their particular play style and campaign setting. While Basic/Expert D&D doesn’t overtly encourage this or provide guidelines for it, the system’s relative simplicity allows players to add levels of complexity if they want, using the base information as a guide.

Perhaps this all feeds my growing interest in OSR games. The trend appeals to me in its nostalgic return to the earliest days of roleplaying games. The OSR movement seems to revel in adjusting mechanics and adding personal touches, with each “retro-clone” presenting the designer’s own version of the iconic D&D rules colored by their own house rulings. Most OSR games I’ve seen offer a variant presentation and rules from the early source game, usually original D&D (the set of digest-sized books), Basic/Expert D&D, and first edition AD&D. Some – particularly Kirin Robinson’s amazingly gorgeous Old School Hack – take the basic trappings of D&D and turn them into a fantastic refinement of the rules, to the point they barely resemble the source material yet form an engaging play experience in the spirit of D&D.

I’ve perused a host of OSR games, many downloaded for free on the internet, and a few acquired in cherished print format. While I admire the spirit these games attempt to capture – and some do it exceedingly well – I’ve yet to find anything as concise and flexible as Basic/Expert D&D. I regret I’ve reached a point in my life where I have little time to digest massive tomes of rules and setting information and little patience for running anything bristling with such complexities of options. While I continue to enjoy my exploration of OSR games (and other roleplaying fare beyond the sword and sorcery genre), I constantly turn back to the material that inspired my initial gaming experiences.

Comments....
Want to share your opinion? Start a civilized discussion? Share a link to this blog entry on Google+ and tag me (+Peter Schweighofer) to comment.
at 7:14 AM