The Quest for Naval Minis

A few months ago I ordered a copy of Fletcher Pratt’s Naval Wargame: Wargaming with Modern Ships 1900-1945 from the History of Wargaming Project storefront on Lulu. I’d read about it in Jon Peterson’s Playing at the World (which I’ve discussed before) in his exhaustive history of wargaming from the earliest German Kriegspiele to modern times. Although I only dabble in naval wargaming, the rules intrigued me because in their time they drew many non-gaming types into a serious wargame simulation in a sort of social event. The game pioneered many concepts later refined for use in roleplaying games like armor class, hit points, and character sheets. The book and its variant rules got me excited about trying them for World War II naval battles (one of my gaming areas of interest). I intend to offer a closer look at Fletcher Pratt’s Naval Wargame in a future post; for now, however, I want to look at my quest for naval miniatures to use in playing these rules. 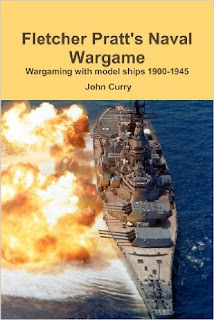 I’ve only dabbled with naval wargaming before, odd considering I designed a naval-themed game (the solitaire Operation Drumbeat), though not one in the traditional miniatures wargaming sense. In my younger days I was a huge fan of the classic War at Sea, one of my first experiences with chit-and-board wargames. I even bought Avalon Hill’s version of the Naval War card game which I used to play with my brother and other neighborhood kids. I bought into Wizards of the Coast’s Axis & Allies Miniatures: War at Sea game when it first released; I played a few solo games using both the included map boards and later some rules for more traditional wargame play without a gridded map. I’ve thought about getting other naval wargames – titles like Mongoose’s Victory at Sea come to mind – but their perceived level of complexity and my lack of miniatures beyond what I had for Axis & Allies: War at Sea discouraged me. Pratt’s game intrigued me in its use of historical data in the game (drawn from Jane’s Fighting Ships), its introduction to those with no gaming experience (albeit with heavy referee involvement), and the eventual adoption of some of its concepts in U.S. Naval training simulations.


Having read Fletcher Pratt’s Naval Wargame I set out to slake my immediate enthusiasm for the game by finding some miniatures and trying a version of the game on my basement wargaming table. I wanted to simulate one of the smaller naval battles I’ve read about, the Battle of the River Plate (though the pursuit of the Bismark and the various stages of the Battle of Leyte Gulf intrigue me, too). This seemed ideal for trying Pratt’s game given the relatively few ships involved (one German pocket battleship and three British cruisers), the lack of air support (a complicating factor in the game), and the fact that Pratt’s group actually simulated a similar battle several months before the actual engagement, a game that accurately predicted the historical outcome.

Pratt’s rules and variants discussed in the book mention several scales ranging from 1:1200 (what was originally used) to a more manageable 1:2400 requiring less floor space; distances in these scales were modified anyway so one didn’t need a football field to accurately simulate battles (a concession, no doubt, many miniature wargames make at these scales). My quest for naval miniatures to use in this particular scenario led me to explore several sources:

Pratt’s Appedix 6: The History of Wargaming Project edition of Pratt’s rules includes an appendix by series editor John Curry discussing where gamers might acquire naval miniatures in the proper scales. While he offers a sample of a do-it-yourself cardstock model using a ship’s deck plans and elevational profile (conveniently enough for the Graf Spee, the German ship in the Battle of the River Plate), he also includes the names of several manufacturers with ships to scale. I ignored the ones overseas and the one that included links to other manufacturers (some of which I already knew). That left Panzerschiffe.com, which offers 1:2400 scale models made in “durable epoxy castings” in battleship gray (though ostensibly one could give them a wash and paint their own details). The four ships needed to fight the Battle of the River Plate would cost $18 (plus $6 shipping). Not bad, though I was a little leery of the smaller of the recommended scales. The small images of the ships didn’t impress me, but the price seemed reasonable for a three-dimensional, fairly detailed nautical miniature.

Axis & Allies Miniatures: War at Sea: I have a nice yet extremely random handful of pre-painted plastic miniatures for this game, in a 1:1800 scale conveniently hovering between the two recommended for the Pratt game. When it first released I bought into the game, though I quickly grew frustrated as with all such games at the “blind” buy in for boosters, shelling out $15 for several completely random ships, some of which I might already have. That might be fine for Magic: The Gathering cards at $4.99 for a booster pack and a huge stable of cards from which to draw random packs, but not for a miniatures wargame, even one with nicely sculpted and fully painted minis. As with many such games, a large secondary market exists online for miniatures; yet purchasing a specific miniature, or just a similar one, for a particular scenario remains unreasonable in terms of the time, money, and effort expended. I’ve even found them at convention flea markets with collector prices (assuming sellers are willing to part with singles instead of entire collections). The models are generally nice with decent paint jobs – I can’t complain because I love pre-painted miniatures that don’t require my not-so-delicate touch with a paint brush – but the plastic sometime warps along the length of a ship so it won’t even sit upright on the game table (yes, I know about the boiling water trick, but I have little patience for it with product of this level of quality). I’ve enjoyed gaming with what Axis & Allies miniatures I own, but acquiring ones for a specific scenario remains a prohibitive option.

GHQ: GHQ has long set the standard for “micro” scale miniatures, whether 6mm tanks or 1:2400 scale warships. Their models are gorgeous, though they proved the most expensive of my options and would still require assembly, painting, and mounting on a stable base. The four ships necessary to simulate the battle would have cost almost $50 before the $6.95 shipping. They’re gorgeous models – I own, have painted, and enjoy using their 6mm tanks – but a bit on the pricey end of the scale for my little jaunt into naval wargaming.

Topside Minis: I don’t remember where I heard about Topside Minis...maybe one of the wargaming news website I frequent (probably Tabletop Gaming News). When I explored the website and looked at the products offered I was hooked; they were clearly the best choice for good-looking ships at reasonable prices. Topside Minis offers an affordable alternative to traditional miniatures: full-color stickers with historically accurate, top-down renderings of warships on ocean backgrounds (including bow waves and wakes), with the ship name, class, and nationality’s flag for easy identification. The stickers arrive on sheets one must trim before peeling and mounting to the enclosed and properly sized wooden tiles. The 1:1850 scale fits nicely between those the Pratt rules recommend. The price for the necessary ships (conveniently packaged in a “River Platte Battle Set”) came to $6.50 (plus $4 shipping). This seemed the right product for me.

At first I was skeptical of this approach. Surely these seemed more like glorified, top-down game counters than actual serviceable miniatures. I looked over the website and was impressed with the wonderful color and detail the ships displayed. I read about the stickers being tear- and water-resistant. A page discussed and illustrated the steps in trimming the stickers and mounting them on the appropriately sized wooden tiles included with your purchase. It seemed like a novel, economical idea; maybe not one a die-hard wargamer would settle on, but one suitable for someone like me who mostly dabbles in naval wargames.

Then I saw a tab on the website: “FREE Promo Unit.” Topside Minis sends out free units to gamers (one per household) who want a first-hand look at their product. So I submitted a request for a free unit. What arrived in the mail a few weeks later was a single Japanese destroyer sticker on a sheet, the appropriately sized wooden base, and a brief note with instructions on trimming the sticker and mounting it to the base. This didn’t take too long – practically no time at all when compared with cleaning, priming, painting, and basing a traditional three-dimensional miniature – and I soon had a sample I could hold in my hand and sail around my blue-felt ocean. I was pleasantly surprised that this didn’t just feel like some printed cardboard counter; the wooden base offers enough weight and friction against the playing surface so it doesn’t get knocked around too easily. The detailed, top-down artwork gives a vivid impression of the ship.

So I went ahead and ordered the “River Platte Battle Set” containing the Graf Spee, the British heavy cruisers Exeter and Cumberland (the latter of which didn’t quite make it to the battle, though it was nearby), the cruiser Achilles, and the light cruiser Ajax. Since these were so affordable I also added two other German pocket battleships, the Deutschland and Admiral Scheer; the Pratt rules mention the problem of identifying enemy ships in the game and the latter of the two ships was one a British captain initially thought they were chasing. Even so my order still came in at $8.90 plus $4 shipping...an extremely affordable option for a dabbler in naval wargames. Having PayPal as a payment option helped seal the deal.

A week or so after I submitted my order the stickers and wooden bases arrived in the mail. Trimming and mounting the stickers with a good blade, straight edge, and cutting surface took a few minutes. Since these ships were larger than the sample Japanese destroyer I’d received the weight of the bases really gave them substance. The small fleet stacks neatly for storage and I don’t have to worry about bending or scratching painted pieces.

Topside Miniatures offers a full line of naval ships and aircraft for all the World War II theaters. Ships are conveniently arranged in battle sets by theater and engagement (including ones for such famous clashes as the Coral Sea, Midway, and Taranto) or by nationality; one can also peruse the ships by nationality and type and order single ships. The company also offers similar ships for World War I naval engagements. Topside Minis continues designing new ships to expand its product line and support additional battles.

I hope to find some time to give the Pratt game a try with these new miniatures. While some gamers might not care for the flat profile, it works particularly nicely for the Pratt game, which charts out salvo hits using upturned golf tees; the flat surface can enable me to put hit markers directly on the miniature. For those trying out Pratt’s game in its original form – played on the floor – these miniatures seem able to withstand an occasional stepping-on and don’t cost too much to replace if broken, lost, or otherwise mangled.