The holidays seem like a great time to share our adventure gaming hobby with others, especially those not yet initiated into such enjoyable entertainments. Families spend time visiting, we receive games as gifts, kids have a few weeks off from school, and we seek some sense of the season’s fantastic wonder in escapist games. We’re often sorely tempted to invite non-gamers to try our latest pursuits, often prompted by queries of “Hey, what’s that?” upon unwrapping a new acquisition or “That looks neat, can I play?” as we show off our game libraries or peruse our rulebooks. But sharing our adventure game hobby with the uninitiated through a positive play experience takes a bit of restraint 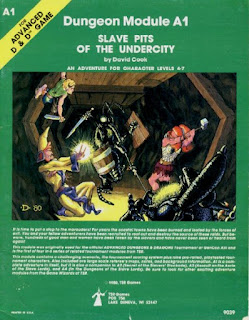 I recall from my youth a host of unsuccessful holiday games with my brother and cousins who shared some similar interests and were easily convinced to try something new by their oldest siblings. One year while visiting I tried to run the AD&D scenario A1 Slave Pits of the Undercity. Even using the module’s pre-generated characters the effort quickly devolved into a morass of bored players, long rules explanations, and not much adventuring. My oldest cousin didn’t fare much better. His attempt at running the Avalon Hill Dune board game – newly received for Christmas – had everyone’s head spinning with no clue how to proceed. The back-up plan of Risk fared no better in the confusing explanation of how the dice resolved combat; the experience probably contributed to my life-long distaste for the game (not a bad thing in my estimation).


What went wrong? I think we were doomed from the start by a few problems gamers don’t always take into account when sharing their hobby with newcomers. (They’re also issues I see occasionally at game conventions where, even among gamers, exposure to a new game or system can seem overwhelming despite the referee’s experience and enthusiasm...or perhaps because of that.) In some cases we were trying to run games we’d just received as gifts, so we didn’t really have time to immerse ourselves in the rules, run a few practice games, and get a good handle on how to run or explain the rules. These games frequently run several hours, far more time than we actually had and way longer than some of our attention spans. Sometimes the games are just far beyond the ability for newcomers to comprehend and play, let alone enjoy. It’s an issue I’ve faced recently trying to introduce my young son – and other kids under the age of eight – to various games that might engage them.

So how do we handle non-gamers asking to try out our new game-related holiday present? How do we give in to our urge to share our adventure gaming hobby in a positive way without overwhelming the uninitiated? Here are a few strategies that have worked for me in the past:

Offer A Suitable Substitute: When newcomers express an interest, channel that curiosity about a game that isn’t suitable (either for its complexity or play time) toward something similar yet more manageable. Try explaining that the current choice might seem exceedingly complex, but that you could try something similarly themed yet far more accessible to newcomers. Instead of running a full AD&D adventure module I might break out Dungeon! for a similar theme and much simpler game play. I’d even recommend Risus: The Anything RPG or even Hero Kids for short forays into roleplaying games for the uninitiated. But not the full Advanced Dungeons & Dragons experience.

Create A Menu: Better still, have a “menu” of suitable games ready to present to curious non-gamers. I usually have some basic fare on hand; not “party games,” mind you (something I greatly dislike), but games with simple core mechanics, engaging themes, and opportunity for strategic choices once folks start understanding the rules. My usual “game menu” consists of such titles as Qwirkle, Tsuro, Castle Panic, Forbidden Island, King of Tokyo, and Gravwell, all games I’ve taught my young son at some point over the past three years. Popular Euro-games like Carcassonne, Settlers of Catan, and Ticket to Ride would work nicely, too. Much as I want to try the Sergeants Miniatures Game or Memoir ’44, I fall back on my basic game menu for newcomers to make sure they have a positive experience with a rules set they can follow and enjoy competitively.

Streamline Rules: If you know a game well enough you might streamline the core rules to become comprehensible to a new player. Some games make this easy. I’m thinking of the X-wing Miniatures and Star Trek: Attack Wing games, which come with a fairly basic quick-start set of rules to get people engaged in a meaningful play experience right away; games that introduce core concepts useful when they move on to the full rules. My recently acquired Best Treehouse Ever game offers some rules modifications for play with very young players. Sometimes playing a fast card game with open hands helps teach the rules and gives new players a chance to ask questions and form strategies.

Know the Game: Whatever game you choose, make sure you know it inside and out, including the best way to explain mechanics to newcomers. Gauge how long it could take, including additional time to set up components and explain or even demonstrate the rules. An awareness of the players’ tastes, too, can help determine what kind of mechanics or theme the would best enjoy.

Take your time and enjoy the holidays. If games are part of your celebration, make sure everyone interested has an opportunity to join and contribute to the experience. The game might not be what you personally want to play, but finding a game to accommodate newcomers looking for an introduction to your hobby might just cultivate a few new gamers in your circle. I hope everyone has a joyous holiday and a game-filled New Year!