A Wealth of Printables 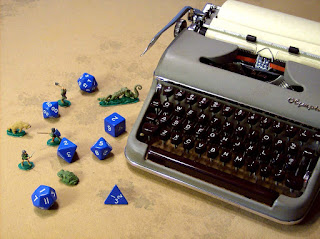 The recent release of S. John Ross’ HexPaper Pro reminded me how much the technological advances of the Internet Age have enhanced our collective gaming experiences. It wasn’t too long ago – in what I like to call the “Golden Age of Roleplaying” (the early 1980s) – that some of us purchased pre-printed character record sheets and hoarded graph paper given our limited resources and lack of home publishing technology. Today computers, printers, and the internet give us seemingly unlimited access to printable game accessories (paper minis, graph/hex paper, maps, adventures), PDF and print products available through online e-storefronts, and to a worldwide community of fellow gamers.

I’m not going to pretend my early experience with roleplaying games is typical of the average gamer of the time, but it serves to illustrate how gamers like me managed with limited technology and resources and demonstrates why products like HexPaper Pro are so important. After discovering the Dungeons & Dragons Basic Set in 1982, I immersed myself in the game, buying more books and modules, creating characters, drawing maps, writing my own scenarios, and playing occasionally with the neighborhood kids and school friends. My creative resources, however, remained limited. In our household graph paper was a rare treat, so when I got a few sheets or, on occasion, a slim pad, I reluctantly put them to use creating adventure and location maps. Hex paper was nearly unheard of, and, had we found any, we would have used it up as quickly as we expected to consume character sheets. We didn’t use miniatures too much simply because we didn’t have many, and certainly not enough to represent both the adventuring party and encountered monsters. For a while I used loose-leaf paper retrieved from school binders for writing adventures, but after a while I started typing out my scenarios (and eventually an embarrassingly amateurish gaming fanzine) on my family’s trusty Smith Corona manual typewriter.

We wrote down character information on ruled sheets of loose-leaf paper scavenged from school binders and notebooks; some folks still prefer a sheet of lined paper over printed character sheets. I often wondered if I should buy the official TSR D&D and AD&D character sheet packs, only to dismiss it as an extravagant expense for a resource we’d quickly deplete. Even if the D&D Basic rulebook came with a blank character sheet (it didn’t, though it included one filled out with a sample character’s stats), we would have been hard-pressed to find a photocopier; they weren’t as ubiquitous in school and public libraries, and most dispensed slick paper that proved almost immune to writing with any implement (as well as clean erasure). Eventually my brother and I found a basic solution. He’d received a toy printing press as a present one year, the kind with the drum you turned with rubber type. (The magic of the interwebzes tells me this was a Superior Star Rotary Printing Press.) Our dad, always supportive of our hobbies, worked in tech support (what I thought at the time was “Texaport”...which, of course, has since evolved into Information Technology) and often came home with the ends of perforated computer paper too short to print out reams of reports; he had a pile of this paper cut exactly to size for the toy printing press. So we spent an afternoon typesetting rubber letters to form a very basic character sheet. We ran off a ton, which we proceeded to use to practice navigating the character-creation rules of both D&D and AD&D, make our own (often disposable) characters, and, with those we didn’t use, transferring some to the status of non-player characters (NPCs).

Fast-forward 35 years and we see how the Internet Age, with nearly ubiquitous access to computers, printers, and the internet (at least in middle-class Western society) has transformed the landscape for gaming resources. Today we print everything we want. Talented gamers make their own customized character sheets for games – and their house-ruled variations on those games – beyond the PDF character sheets publishers make available for download on their websites. One can find, download, and print all kinds of roleplaying game resources: character sheets, maps, character portrait clip-art, optional rules, graph and hex paper, even entirely new imaginings of classic rules as well as original rules. I’m not even touching the host of free PDF adventures, print-and-play board games, and printable miniatures available online, including font-based ones to print at any size from Ross’ Cumberland Games and excellent minis from across the genres from Khairul Hisham’s Patreon pages (and that’s just a small sampling of print-and-play miniatures resources out in the wider interwebzes). I’ve seen printable models for dungeons, floorplans, houses and terrain for use with roleplaying games and wargames. The possibilities for gamer resources seem as endless as the wide expanse of the internet. 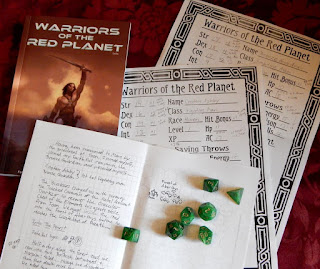 Technology and the internet affect many aspects of how we game today. I’ll offer an example from my own explorations of solitaire gaming and the Old School Renaissance (OSR). A while back I discovered Warriors of the Red Planet, an OSR game with a swords and planets setting similar to Edgar Rice Burroughs’ Barsoom series. I’d heard about the game while reading some news release, forum, or social media item on the internet. I ordered a print-on-demand copy of the book from Lulu.com. After reading the game I sought to run a solo adventure using some play aids I found online; I downloaded a character sheet online and printed the PDF. Then I created a small journal from a few pieces of graph and hex paper I printed out from a website, folded, and stapled into a booklet. Back in the 1980s I wouldn’t have had this experience relying on the technology and distribution networks of that time; today it doesn’t merit a second thought.

I suppose folks who entered the roleplaying game hobby in the Internet Age take all this for granted, and that’s fine. What technological innovations will affect the pen-and-paper roleplaying game hobby in the next 35 years? Will the hobby even exist as such after that time, with games and players migrating to electronic formats, social media, and other leisure pursuits altogether?