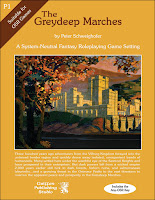 I’m in the final stages of bringing my latest project to publication, meaning the self-doubt is really kicking in. The Greydeep Marches is a short (34 pages), system-neutral, OSR-suitable setting sourcebook for fantasy roleplaying adventures. The setting flowed from some initial brainstorming that first appeared in one of my old Hobby Games Recce pieces – “The Importance of the Setting Bible” – with development enabling me to dabble in some new concepts and techniques from various influences. On the surface it looks like plain “vanilla” medieval fantasy: a kingdom, knights, villages, elves, dwarves, halflings, dark forests, ruins, etc. “Boring,” one might say. Yet, like a serving of vanilla ice cream, it offers gamemasters the chance to add toppings to suit their own tastes, a foundation on which they can build a particularly tasty treat.

The Greydeep Marches reflects my own sense of a fantasy roleplaying setting with a good dose of things I’ve picked up publishing games for more than 25 years and gaming for more than 35 years. As a creator I’ve not dabbled in the fantasy genre as much as I would have liked. I’ve indulged influences that reflect my youthful immersion in fantasy roleplaying games: the Moldvay edition of Basic/Expert Dungeons & Dragons; B2 The Keep on the Borderlands; fantasy literature of my youth (Tolkein’s The Hobbit and Lord of the Rings, Eddings’ The Belgariad); the rich tapestry of orchestral music to which I set my early adventures (by Nikolai Rimsky Korsakoff, Gustav Holst, Richard Wagner, John Williams); and the movies I saw on television (the films of Ray Harryhausen, Journey to the Center of the Earth, The Lost World, and, once again, The Hobbit). It doesn’t have brightly colored flailsnails, drug-infused sorcery, mutant gods, crashed spaceship towers, or magical vaginas. elements I feel contribute to a more “gonzo” style of fantasy that just doesn’t suit me (though they seem to appeal to many gamers these days). Just blah vanilla fantasy: all the typical races in their tidy enclaves; a massive dark forest infested with monsters; knights patrolling the land and dealing out justice; even the obligatory tavern where adventurers can gather, eavesdrop for rumors, and prepare their next foray into the vanilla unknown.

And yet like plain vanilla ice cream, The Greydeep Marches waits for gamemasters to read through and pick up on the potential toppings to enhance the game experience in their own way. Perhaps they want a light dusting of conspiracy from one of the factions pursuing their hidden agendas. Maybe they’d prefer a dollop of impending metaplot doom trickling down through that shadowy forest from the Ostmaur Peaks. Or possibly they’d prefer to just heap everything on and see what flavors the players like best. Do the Sentinel Knights and their sense of “justice” really keep the peace or simply fuel a simmering discontent? What’s causing the flood of of monsters (or are they refugees?) to filter through the brooding forest into more civilized lands? What’s really behind the horticultural magic protecting the village of Thornhedge? What’s Duke Latikov really doing with all those powerful magic items he hoards? Is that tavern really a good place to plan your next adventure? Take your pick, sprinkle a little over a mere encounter or a full adventure, and see how the flavors and textures work together.

I like “vanilla” fantasy settings forming a foundation on which to build engaging game campaigns. I like presenting a seemingly basic setting with lots of intrigue, danger, and other enhancements lurking just beneath the surface (much like the fantastic elements lurk beneath historical reality in past work like Pulp Egypt and Heroes of Rura-Tonga). I’ve had lots of playful fun crafting various elements (and a few humorous references) writing and developing The Greydeep Marches...an experience that hopefully shows through in the final product. I’ve created a setting in which I’d enjoy running fantasy roleplaying game adventures...one I hope to share with eager readers. As I offer it to the very public, world-wide audience of gamers I can only hope it doesn’t seem too bland to satisfy them, that they find within it some of the subtle toppings they can carefully sprinkle into their own explorations of the setting. It might seem vanilla on top, but I invite readers to dig deeper and mix the ingredients I’ve offered to suit their gaming tastes.