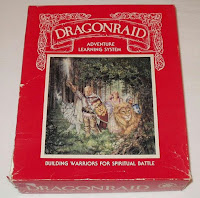 When I shipped off to college in isolated central New York state my parents made sure to send comforting care packages which included my monthly Dragon Magazine. They offered small oases of escapism while I navigated the turbulent waters of collegiate studies and social adjustment. Eventually I fell in with the local InterVarsity Christian Fellowship, having been a lifelong Lutheran and seeing in the group people with whom I could more easily relate. While they exposed me to different aspects of Christianity, I’d hoped to introduce some of these new friends to my favored pastime of adventure gaming. And in the pages of Dragon Magazine I discovered advertisements for a fantasy roleplaying game built around elements of Christianity. Surely this was the key to introducing roleplaying games to my friends from Christian Fellowship, a means to engage them in my gaming hobby through a common theme.

[And here my memory and reality cease to coincide. For the life of me, as I comb through my archived Dragon Magazines from that period, I cannot find a single ad for DragonRaid. I know I saw them somewhere, because the artwork and ad copy inspired me. Where I saw them I cannot recall.]

The ads for DragonRaid featured intricate color artwork merged with inspiring scripture and the promise of heroic fantasy roleplaying action with a Christian theme. I certainly didn’t take slogans like “Christians! Learn how to fight at the gates of hell!” seriously, but I found the convergence of roleplaying games and faith intriguing. Certainly something like this might appeal to my Christian Fellowship friends, merging their faith with my interest in adventure gaming. From all the advertising I thought DragonRaid was the key to my early efforts. But I never found it in hobby stores at the time, nor did I pony up the seemingly princely sum of $35 to mail order a copy. I never proposed gaming with my Christian Fellowship buddies.

It was just as well.

During one summer break I discovered West End Games’ Star Wars: The Roleplaying Game. When I saw the rulebook and sourcebook at the local Waldenbooks I just grabbed them and put them on my “for college expenses only” credit card. I spent that summer immersing myself in the game and playing it with my hometown gaming friends (a small, geeky group that steadily grew over my high school and college years). To me this was the ideal recruitment game with approachable, intuitive mechanics balanced and an engaging theme (two factors I’ve discussed before). Those two books offered everything I needed to “sell” the game to my gaming and non-gaming friends: a solitaire tutorial adventure demonstrating the mechanics; an intuitive and basic core game mechanic; quick character creation centered on “templates” of stereotypical cliches from the Star Wars universe; and a familiar setting most everyone (at least of my generation) remembered as a fond part of their childhood, all reinforced with images from the movies. While my earliest adventures didn’t quite go so well (someone fumbled a thermal detonator in Tatooine Manhunt...), the game helped me hone my gamemastering skills. I finally found a few people in my dorm junior year at college interested in trying something new and I ran a scenario or two of Star Wars. One of the players belonged to the InterVarsity Christian Fellowship with me. Although I didn’t really recruit any new, longterm gamers to the hobby, the effort offered some roleplaying diversion from the stress of my collegiate studies. 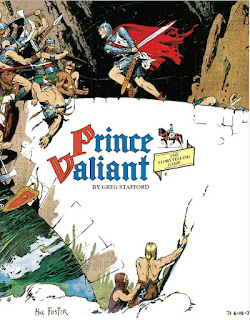 [I’ll put in a good word for another great roleplaying game to introduce newcomers to the adventure gaming hobby: Prince Valiant: The Storytelling Game. I’m reminded of its prominence in my hometown gaming sessions by the Kickstarter-funded re-issue of the game in hardcover, full-color format along with a book of all-new scenarios with similar high production values. I discussed my experiences with the game in an earlier blog post. Alas, I obtained the game late in my college years and never tried running it for my academic classmates. I did manage to host it for friends in my hometown, particularly those who didn’t game but had gamers in their social circles and wanted to find out what all the fuss was about. The easy, intuitive mechanics and the familiar Arthurian setting with its legendary, chivalric trappings helped everyone immerse themselves in the game.]

In retrospect my trying to run DragonRaid – had I the patience to wade through multiple booklets and a host of charts – would probably have opened a theological schism in my college Christian Fellowship group between those who felt it was appropriate and those who saw in it the evils of roleplaying games despite the evangelical Christian approach. I recently acquired a copy of DragonRaid and, while enjoying it for its nostalgia value (and a piece of my “what if?” collection of early games), I realized it was far too complex and overwhelming to serve as a gateway product to roleplaying games, even for Christians. It was an admirable product attempting to combine Christian elements with roleplaying games to satisfy gamers and non-gamers alike, but the complexity of its game mechanics overwhelmed any newcomers to the adventure gaming hobby, no matter how strong their faith. The original game remains available online (with a CD instead of the cassette tape); the website seems to indicate a new edition is in the works to perpetuate the game’s mission of serious discipleship through roleplaying game play.

I haven’t embarked on any roleplaying game recruitment crusades lately despite an arsenal of games well-suited for introducing new players. A year or two ago we attempted some roleplaying sessions with my young son, the Little Guy. We started out with Hero Kids, what I have come to see is among the more ideal introductions to traditional fantasy roleplaying games without the trendy storytelling mechanics in vogue these days. With his occasional interest in Star Wars (primarily the Clone Wars series and Rebels) we ran a few sessions of West End’s Star Wars Roleplaying Game, but his interest waned and our calendar filled up with other activities. A new game store recently opened in a nearby town. I’m considering posting a flyer and seeing players for a classic Star Wars roleplaying game session...but that effort’s primarily preaching to the choir.