Last week’s post about “Attracting Newcomers to Roleplaying Games” inspired me to consider two factors that might influence people in trying new games. A game’s theme and complexity are usually topics discussed from the design standpoint: does one start with a theme and build game rules around it, or does one begin with a play mechanic and build a themed game around that? Yet theme and the complexity of mechanics also figure into the conundrum of how best to introduce people into any games within the adventure gaming hobby. For beginners – especially complete newcomers – I find an attractive theme can best engage their enthusiasm to try a game, while good mechanics (with light yet intuitive complexity) can provide an enjoyable play experience and bring them back to the table for a second try. 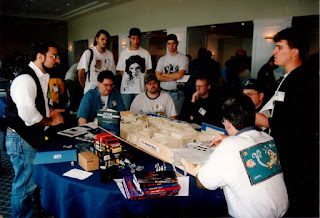 For many people a game’s theme initially interests them. Theme gets players to the table, understandable and engaging mechanics help transform that theme into a rewarding play experience. For instance, if I asked a five year-old if he wanted to play a game about hunting dinosaurs or one with a “push your luck” mechanic, he’s going to want to play something with dinosaurs; as it happens, these elements both describe Steve Jackson Games’ Dino Hunt Dice, yet new players hone in more on the enticing theme than the game rules.


Just because theme gets newcomers to the gaming table doesn’t mean mechanics aren’t important. The complexity of rules affects their initial play experience and often determines whether they return to the game again. If turn sequences and player choices are too complicated players might feel overwhelmed and unable to exert control over the game. Far too simplistic mechanics might result in boredom. Balancing player choices and game complexity isn’t easy, but if done right can engage players enough that they’ll want to try the game again. In some cases those hosting the game might modify the rules to streamline game concepts for newcomers, adding them back as they gain a better understanding of core game concepts. Quick-start versions of games sometimes accomplish this nicely, focusing on basic rules with an eye toward providing a fulfilling experience.

This hints at a third factor in this equation: the role of the referee or “host.” Theme and mechanics remain core – and a good game can work for newcomers right out of the box – but the adventure gaming hobby still relies heavily on actual-play experiences guided by seasoned gamers. Being a good host requires enthusiasm, patience, and a positive attitude. I offered some hosting tips for running games in public venues in my old “Become A Gaming Ambassador” post, but many work well for those introducing games to newcomers in more private settings.

Many players identify first with a game’s theme and secondarily with its mechanics; yet exceptions exist. More sophisticated gamers might give in to temptation to play a particular game based solely on the mechanics. Some gravitate to a certain kid of mechanic or core game – the d20 or d6 systems, a specific edition of D&D (including offshoots like OSR and Pathfinder), various indie storytelling-style games – playing them across a number of genres or sticking to only one theme that satisfies them best. But this is all “preaching to the choir” and not introducing interested newcomers to the gaming hobby.

My experience working on West End Games’ Star Wars roleplaying game line gave me lots of opportunities to tempt non-gamer fans. This was one of the best examples of a game’s theme drawing newcomers into the hobby. In the mid to late 1990s Star Wars saw a great resurgence, first through the Expanded Universe novels of Timothy Zahn and others, and later with the special editions of the classic trilogy in theaters. At gaming and media conventions we’d run demonstration games for avid Star Wars fans who’d never roleplayed in their lives (or who had tried D&D once in high school or college, a seemingly common experience for adults of my generation). West End’s D6 System mechanics and the use of pre-generated characters helped make the introduction to the roleplaying game format easy. Want your character to do something? Check the skill die code, roll that many dice, and total them up, the higher the better. The Star Wars theme brought many to the table; the easy-to-learn D6 mechanics helped bring a few more gamers into the fold.

I have a host of experience introducing newcomers to games from years of gaming and working in the adventure gaming industry; during this time I’ve cultivated some techniques for teaching people about games, mostly in public settings like game and media conventions. Most of these pertain to those public settings but can also work in presenting games, highlighting their themes, and explaining mechanics to newcomers:

Visual Presentation: Tempt players by showcasing game components. Open board game boxes and set up the components, allowing folks to peruse the rules, handle pieces, and read cards. Let players page through the roleplaying game rulebook or sourcebooks (having spares helps); put up miniatures, maps, or other player handouts to give them a foretaste of the setting. Setting up miniature wargames (and even chit-and-board wargames) in advance can provide a detailed visual layout to tempt players. Having components readily at hand can prompt questions from new players and serve as a way to begin introducing them to the rules. Some of the best demo games I ran used my huge Mos Eisley 25mm-scale diorama, complete with numerous denizens, ships, and vehicles (and a separate cantina diorama); it managed to draw many Star Wars fans to the table to take a look, some of whom stayed around for a quick demo game.

Modify Game Rules: Streamline rules to a level appropriate to the audience. Sometimes this just means using a game’s most basic rules without options or advanced mechanics. Other times this means dropping some core concepts that aren’t central to completing a game’s victory objectives. Many introductory roleplaying game experiences rely on pre-generated characters to focus more on the mechanics of combat and exploration rather than the more involved details of character creation. The Flight Path games like the X-wing miniatures game or Star Trek: Attack Wing demonstrate how a quick-start rules set can provide a fun play experience without all the intricate bells and whistles that make the full game enjoyable.

Keep It Short: Newcomers, especially children, can have short attention spans, particularly when other attractive activities tempt them. Not all games offer a complete experience within the players’ time limit. Streamline games to dive into the actual play as soon as possible. Roleplaying games can use pre-generated characters and focus on a handful of encounters – even a single skirmish – to demonstrate core rules. Some board games have short enough play times to keep participants engaged. Few miniature or chit-and-board wargames can offer a complete experience in a reasonable time, though setting everything up beforehand and keeping objectives simple can help. At West End I typically had a few short scenarios on hand for conventions: a few encounters for quick, drop-in demos on the Mos Eisley diorama, then a few two-hour adventures for folks who wanted a longer session but not the full four-hour game.

Handouts: Putting something in a player’s hand gives them a point of reference during the game. This might be a card summarizing the turn sequence and player choices in a board game, a sheet of relevant notes and tables for a wargame, or a character sheet or other rules summary for a roleplaying game. For some games players might take handouts home with them as a reminder of their game experience and a point from which to further explore the game online or with other players. West End Games published the Mos Eisley Shoot-Out mini-game to promote the Star Wars roleplaying game and also had some demo materials that included a one-sheet rules summary and introduction to basic roleplaying game concepts. Few board games have printed references to give away to players, but wargamers can make or copy their own reference sheets or flyers providing tables, rule summaries, and even historical context for their scenarios.

I’m encouraged to see gamers taking the initiative to bring more players into the hobby. Erik Tenkar over at Tenkar’s Tavern has undertaken the task of distilling the Swords & Wizardry rules into a four-page folio which, with a specially designed adventure and possibly other gamemaster references, can serve as a good tool for gamemasters to tempt newcomers to try a brief old-school roleplaying experience. We need more efforts like this to craft introductory game material specifically for newcomers – on their own or with an experienced gamer as host – to help spread interest in the hobby and recruit new players.

Comments....
Know of any efforts or tools to introduce newcomers to the adventure gaming hobby? Want to share your opinion or start a civilized discussion? Share a link to this blog entry on Google+ and tag me (+Peter Schweighofer) to comment.