We recently took my son, the now nine year-old Little Guy, to his first Civil War battlefield. I’m always worried about doing these things too soon, but he demonstrated an interest in the history: getting enthralled by the National Park Service movie on the battle, examining and reading about the artifacts, walking along the trails to the barely visible remains of entrenchments, and tolerating his father and uncle droning on about aspects of the exhibits and terrain. His growing understanding of history merging with my enthusiasm for games gives me an idea for summertime activities that might benefit him next year when he studies Virginia history: combining day trips to area battlefields with reading books from Daddy’s library and playing games portraying the events we study. Our trial visit to the Chancellorsville battlefield and a few rounds of Richard Borg’s Battle Cry helped convince me this just might work.

We live in Culpeper, VA, a central location that saw a lot of action during the Civil War. Several areas in the county saw fighting ranging from skirmishes to massive battles: Cedar Mountain (August 1862), Kelly’s Ford (April 1863), Culpeper Court House (September 1863), Rapahannock Station (near Remington, VA, twice: August 1862, November 1863), Morton’s Ford (February 1864), and Brandy Station (June 1863), considered by those who know about it as the larges cavalry engagement in the western hemisphere. The Union army occupied Culpeper County in the winter of 1863-64; General Grant arrived in April 1864 to begin his overland campaign that ultimately led to the Confederate surrender at Appomattox in 1865. We’re within an hour’s drive of several major battlefields beyond the county border: Manassas (July 1861, August 1862), Fredericksburg (December 1862), Chancellorsville (May 1863), Wilderness (May 1864), Spotsylvania Court House (May 1864), and New Market (May 1864).

Summer’s always a challenge for a “stay at home dad.” Aside from losing much of the time I’d normally spend on writing and game design projects as well as household duties, I must often play the role of chief entertainment provider. Nothing freezes my heart with terror than the complaint, “Daddy, I’m bored...” (to which I parody, in my best Max von Sydow impression, “Klytus, I’m bored...what plaything can you offer me today?”). So even just the nearby battlefields serve as a plentiful source of day trips. Most of the major sites screen orientation films combining documentary narration with re-enactor footage. Galleries display artifacts and explain the battles and Civil War life. And, of course, the battlefields themselves offer a first-hand view of the terrain over which Americans fought. I’ve already scouted website schedules for living history events, demonstrations, and even a week-long, half-day Civil War camp for kids.

Day trips serve as great opportunities on their own; but I find some extra involvement can help cement lessons learned and provide a more meaningful link to history. I have a decent library shelf with Civil War reference books, including a host of helpful, wonderfully illustrated Osprey books and a few historical atlases, plus some relevant DVDs (one from the Chancellorsville battlefield and, of course, Gettysburg). Then there are the games. I could run various miniatures scenarios with the different figures I have (many of which still require painting) and I have more traditional board and card game fare, including GDW’s A House Divided, a few decks of Columbia Games’ Dixie card game, Decision Games’ Salem Church, a version of Avalon Hill’s Gettysburg, and Battle Cry, perhaps the most accessible for a nine year-old kid. (I have a vague recollection I might have once had some of West End Games’ Civil war titles, but if I did, I regret I’ve long since parted with them.) I picked up my used, 1999 version of Battle Cry (including the Jackson Campaign flyer from Origins and GenCon 2000) for $20 at a wargaming convention flea market (a fantastic place to find great deals on games and miniatures). I dabbled with it solitaire after I first got it, but it’s been sitting in a fairly prominent place in my office (as prominent as can be in a space cluttered with game boxes and books). 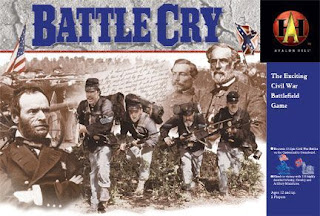 Spurred by a one-page biography of General Ulysses S. Grant the Little Guy wrote for school, he asked if we could play Battle Cry on our Thursday game night. In the past he’s immersed himself in various historical subjects – thanks in part to his school’s library – including the sinking of the RMS Titanic and the attack on Pearl Harbor. While I had some books about the Titanic he could peruse, I soon acquired some books on Pearl Harbor for him, including a good picture book, the relevant I Survived… series title, and the Osprey book for the attack. He ultimately inspired me to create a Pearl Harbor themed Wings of Glory scenario we ran at one of the regional wargaming conventions we frequent (and no doubt will do so again with some rules adjustments). So it came as no surprise that he wanted to give Battle Cry a go. Having played a few games of Memoir ’44, he quickly understood the rules for its Civil War predecessor, reading the cards he played out loud and carefully considering his moves and attacks. Nonetheless I mercilessly crushed his Union forces in the First Battle of Manassas/Bull Run, sending my cavalry into his rear area and crashing into units left and right. This week during his school’s spring break he again requested a game, this time one with Union forces under General Grant, whom he’d briefly studied. This time he was a bit more cautious, having learned the rules at Manassas and demonstrating some good tactics that kept the Confederates at bay. Although it looked for a while like the South would prevail with a generous margin, Grant made a good showing and fought the battle to a draw (I destroyed the sixth Union unit and captured its flag, but we agreed to play just one more Union turn, during which he destroyed my sixth unit).

Finding additional scenarios has proved a challenge. The later edition of the rulebook contains a host of new battles, but other websites have not yielded much useful information. Few come as PDFs and the websites don’t print very efficiently (and lack some of the polished graphic design of other sources). Compared to resources for other Commands and Colors games like Memoir ’44, the pickings seem slim. Still, I think we can at least cover most of the major battlefields we’ll visit this summer (though I need more cavalry figures if we’re going to play Brandy Station...).

Few of my other Civil War games seem appropriate for a nine year-old boy. That said, I wouldn’t mind getting a copy of Columbia Games’ Bobby Lee for a more strategic level investigation of the war in Virginia (I’ve enjoyed the company’s fog of war block game Liberty covering the American Revolution). Some of my miniatures wargaming rules serve well for the period – I’m thinking primarily of Surdu and Dean’s Big Battles for Little Hands – and are suitable for young people with adult referees. I’m tempted to run a skirmish using John Lambshead’s One-Hour Skirmish Wargames, possibly Duffie’s dismounted cavalry probe for a Mountain Run crossing at Stevensburg (a secondary engagement at the Battle of Brandy Station), though this level of skirmish action isn’t really characteristic of the great Civil War engagements. 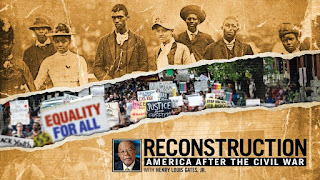 Out of curiosity I looked up his school’s fourth grade “Virginia Studies Curriculum Guide.” While very little time is spent on the Civil War itself (surprising considering how central Virginia was in the war in the east), units also focus on the causes and events leading up to it as well as reconstruction (which we’ve recently explored on our own thanks to Henry Louis Gates, Jr.’s incredible PBS series on the subject). Some folks might claim focusing so much on the military aspect of the conflict ignores other issues; but I’ve found both in our Chancellorsville visit and our gaming that it’s a springboard for discussions into a host of meaningful topics. The movies and exhibits at National Parks Service sites I’ve visited also touch on other issues, particularly slavery, the plight of individual soldiers and families, the political ramifications, and the technology of the day. I’m hoping our summertime history day trips and the companion gaming maintain momentum, lead to some insightful talks, and provide some fun activities. It’s a good experiment to see how we can use more experiential learning to engage kids and reinforce classroom work (or in this case, prepare for it).