Prepping A Solitaire Foray into Tékumel

Reading Man of Gold and diving back into Tékumel source material inspired me to explore Professor Barker’s rich, very alien setting through solitaire play (my distant past attempts at running it with friends having met with little success or satisfaction). I took some time to assemble my resources and work out some story basics...and then I put it to the test on an adventure seed I wrote as a challenge I issued in on of my recent blog posts, “Demonstrating Potential: Adventure Seeds & Outlines.”

Rather than depending on any of the numerous game engines past publications have merged with the Tékumel setting, I’m using the [TITLE REDACTED BY AUTHORITY OF THE OMNIPOTENT AZURE LEGION] game mechanics, one of my favorite go-to systems that has not only provided enjoyment in the past but remains well-suited to easily adapting to different settings I like (frequently without having to learn the setting’s original, often far-more-complex game mechanics). I’m using several resources for setting information to inform my solitaire gaming sessions. These include sections of Brett Slocum’s The Petal Hack, Guardians of Order’s Tékumel roleplaying game, and Jeff Dee’s comprehensive and well-illustrated Béthorm. Aside from providing setting reference I’m relying on these for encounter tables to generate appropriate challenges within the greater mission I set before my characters. Over the years I’ve gained a generalized working knowledge of Tékumel from other sources – including Different Worlds’ distillation of the original Empire of the Petal Throne game (1987) and Gamescience’s The Tekumel Sourcebook - Swords & Glory Vol. 1 (1983) – though I’ve not found them convenient for quick reference during play. I’m also using a set of Rory’s Story Cubes to randomly roll “Glyphs of Momentous Augury” to provide inspiration for adventure developments; I’m sticking with the “Voyages” set (they offer fewer modern symbols) supplemented with the three-dice “Enchanted” set (with more appropriate fantasy inspired symbols). I also have a set of cards I printed (I don’t recall where they came from) with a host of “yes/no” answers with “and/but” qualifiers and some additional story cues. I have a small binder with printed play aids: a map of the Tsolyáni Empire, a copy of the rules I’m using, printouts of some useful resources (primarily drawn from Slocum’s The Petal Hack), character folios for recording stats, backgrounds, and notable possessions, and a lined journal for keeping a chronicle of the characters’ misadventures.

I had fun simply researching an engaging campaign story arc and developing three characters to run through it. The year is 2359 A.S. (one year before the events in Man of Gold). The campaign revolves around the attempts to track down information about an old Bednálljan legend concerning an ancient automaton similar to but more powerful than a Ru’ún but loyal to the commands of a master without the requisite and extremely rare controlling artifacts: the Most Excellent Obedient Warrior. The legend claims Queen Nayári of the Silken Thighs somehow discovered and possessed this artifact; she ordered it on a mission to engage foes beyond the Chákan Forest in the west, from whence it never returned. Details of its powers, travels, and ultimate fate remain sketchy. To find it the characters must uncover more specific accounts of the artifact and its deeds, then follow those clues into the western forests, undoubtedly into dangerous ruins. None of this includes instructions on forging a commanding bond with the thing, repairing it if damaged, or understanding how to control it. Having heard these legends and put stock in them, several factions representing potential imperial heirs influence the characters with the hopes of finding the Most Excellent Obedient Warrior and recruiting it as a proxy champion for heirs in the Kolumejálim, destroying it to deny others from using it in this fashion, or employing it as a weapon against Tsolyánu’s enemies. I’ll freely admit much of this mirrors elements from Man of Gold – a priest researching an ancient artifact, political intrigue surrounding claimants to the throne, factions with hidden agendas – albeit with my own twists and variations. I did this in part to tap into the examples the novel presented of both characters and plots one could experience in the game and to give myself a firm base from which to pursue my own adventures exploring the Tékumel setting.

In my solitaire gaming I typically run three characters, just enough for me to keep track of everything and make for interesting situations, but not a sole character to bear the burden of all the action (and have to rely on a single character’s skills). I created three characters with some distinctive Tékumel elements (and a few aspects reflecting aspects of my own life). All are members of the clan of the Victorious Globe (makers of paper, ink, brushes, and writing supplies), a medium-rank clan based in most cities of the empire, followers of Thúmis and Hnálla and their respective cohorts: 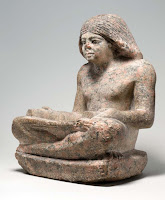 Ibásh hiMirkétme: priest of Keténgku (second circle), scholar of the ancient Bednálljan Empire’s literature, aficionado of legendary tales. His temple has charged him with pursuing his studies of legends regarding a powerful artifact. Hails from Páya Gupá. The young priest believes his order has given him broad leeway to pursue his his studies of the ancient Bednálljan Empire’s literature, particularly the legend of the Most Excellent Obedient Warrior. His order (and that of Thúmis) secretly hopes this activity leads to and gains this artifact to aid Prince Surundáno in his struggle to ascend the Petal Throne.

Bará hiTlakán: Aridáni warrior, formerly a scout and courier with the Legion of the Mighty Prince. Also hails from Páya Gupá. Ostensibly this Aridáni was charged by both the clan and the priests of Keténgku with protecting Ibásh on his journeys to various libraries and other places of research. She remains fiercely protective of him through her clan affiliation, but also serves other masters. Having previously served in Prince Eselné’s Legion of the Mighty Prince she has been secretly recruited by the Prince’s agents to watch over the efforts to retrieve the artifact. Ultimately she must try to possess it for the Prince and his military faction; barring that she must deny it to others seeking to wield its power. Partial to Karakán but generally loyal to the Gods of Stability and the ideal of “noble action.”

Thékuto hiNrashkéme: Victorious Globe clan trade liaison (part courier, part merchant negotiator between clan houses). Well-traveled lover of the good things in life. Not terribly reverent but partial (in a quiet way) to Dlamélish. Hails from Jakálla. With the clan’s permission the priesthood of Keténgku recruited Thékuto as a guide for Ibásh’s researches, having good reason to travel across the empire on official clan business. While he believes he’s acting as a minder for a young priest of his clan, Thékuto suspects the true motive, having also been recruited by agents of Princess Ma’ín in their feeble efforts to locate and retrieve the artifact for their own purposes. He is more loyal to his own interests, primarily the enjoyment of good quality food, drink, accommodations, and company.

The Ever-Gratifying Game of Glorious Anonymity (how’s that, Omnipotent Azure Legion?) assumes characters have equipment essential to their roles, though nothing overly exceptional. I decided to give each character a few “notable possessions” to round out their descriptions and, in some cases, provide advantages to certain activities in the game. Ibásh has a scribe’s kit (with parchment, brushes, and inks) and a knife (more for use in scribe tasks but also helpful for self-defense if necessary), but also possesses a Scroll of Introductions, an ornately calligraphied letter from the high priest of Keténgku in Páya Gupá requesting (on his authority and respect for the order) the reader assist Ibásh in any activity supporting his research (it provides a bonus to relevant rolls regarding bureaucracy and persuasion). Bará’s notable possessions all come under the basic heading of “arms,” including a sword, shield, and highly decorated pieces of chlén-hide armor. Thékuto also carries a scroll case with parchment, ink, and brushes for contracts and correspondence regarding clan business, plus a dueling saber (more for show than anything else), fine raiments (though not above those permissible by his moderately ranked clan), and two slaves, for now simply named “Porter” and “Cook,” who serve Thékuto (and hence the other characters) on his travels, carrying wares and supplies, setting up camp, and tending to meals. In cities they stay at the clan house and run errands for him (a convenient way of handling more mundane story and game functions). I almost gave some of the characters “eyes” or other “magic items,” but I wanted to focus more on story and exploring the world than the usual dungeon-delving treasure grab. They must survive on their wits, skills, and alliances, though farther into the campaign they may acquire notable items to aid their quest.

To test the game system and get myself into the Tékumel frame of mind I decided to run my characters through a short, introductory adventure as they journey to Jakálla to conduct research in the Bednálljan Empire’s records archived in various locations there.

In a previous blog post I lamented the lack of easy-to-use adventure seeds and outlines in games that could really use them to demonstrate how unique settings work (including Tékumel’s); I issued a challenge to “take one of S. John Ross’ ideas from The Big List of RPG Plots and adapt it into an adventure outline for an introductory level scenario based in Tékumel. Try integrating at least one notable feature from the setting, if not more.” I’ve included my results below, based on “Any Port in A Storm,” though I’m not terribly satisfied with them (the writing could be tighter and better organized, among other things). Enjoy the adventure seed; in a future post I’ll return to chronicle the first steps my characters take in their search for the Most Excellent Obedient Warrior.

The Tower of Deathly Hospitality

“Her small chest opened, tunic and all, to reveal a tangle of dark, damp limbs within.”

While traveling along a sakbé road the characters seek shelter in an abandoned guard tower during a sudden monsoon. The caravan camped here set its tents as far on the platform as possible from the dilapidated structure. A single man, drenched in the torrent, stands blankly staring into the tower door. This mid-level bureaucrat pines for his wife, who entered the dark interior seeking shelter despite warnings against trespassing in the haunted site. He implores the characters to retrieve her, promising a reward as well as a favor from his clan.

Inside wet footprints lead to a stoutly barred trap door in the floor, then up a ramshackle staircase to the ruined upper levels. Jovial sounds rise from beneath the trap door. “La, you up there, come enjoy a warm fire, good food, and wine to cheer your belly!” someone calls. Those foolish enough to descend into the structure’s deep sub-levels encounter a small family who invite the characters to share a meal around a smoldering brazier. Something’s off about these people; they’re actually srámathu (Béthorm, page 209) seeking to ambush prey they can later impersonate (a sinkhole opens into an underworld labyrinth through which they entered the tower foundations, part of a long-forgotten palace of an unfortunate ancient Bednálljan governor). Negotiating the rickety stairs to the tower’s upper levels leads to encounters with a lurking Káyi or small crowd of nesting Chnélh who wandered up the well shafts from the lower levels. Eventually they find the missing wife standing in a daze, transfixed by the image of a ghostly glowing “guard” keeping watch from a high window (a real spirit, a trick of the light, an image from an ancient artifact?). She’s easily led back to the platform, but even in the downpour remains in a waking, coma-like state.