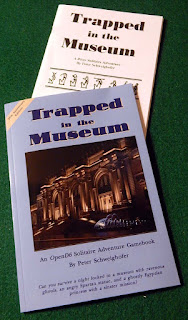 That was back in those Desperate Freelancing Days after West End Games declared bankruptcy and laid off its staff. After recovering from that devastating blow and hastily gluing my fragile self esteem back together I’d hoped (and continued to hope for years afterward) I’d find a full-time job for a game publishing company. Goodness knows I tried, looking for job announcements, taking editorial tests, and pressing the flesh on the GenCon dealers room floor for a few years. I managed to mostly sustain myself for a year before finding mundane work elsewhere, and even then the part-time job still required a good deal of freelancing to keep my head above water. Thankfully the proliferation of the interwebzes and e-mail (one issue that might have contributed to West End’s demise) helped me find writing assignments. It also enabled me to self-publish my gaming material and market it online to a broader audience (also with a great deal of helpful advice and encouragement from S. John Ross, one of the pioneers in the independent online publishing field). I am grateful beyond measure, all these years later, that I can continue my involvement in the adventure gaming hobby publishing scene as much as I do, even at a far lower profile than my years at West End Games. Though I spent five years focusing my writing and editing on the Star Wars Roleplaying Game – and later other established games for freelance assignments – my independent situation allows me to develop projects inspired by my personal interests and experiences. 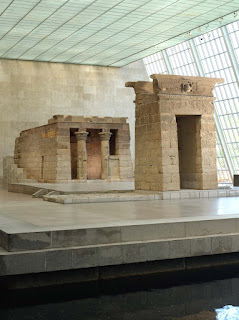 Trapped in the Museum capitalizes on my love for the Metropolitan Museum of Art in New York City. When I was a kid my parents took my brother and me there on occasional forays into Manhattan. I gained my interest in medieval history from the amazing arms and armor collection and my love for ancient Egypt from the museum’s galleries, the largest collection of such antiquities in America, including the rescued Temple of Dendur reconstructed within the museum itself. I still have the picture postcard books highlighting holdings in both collections. The museum further expanded my interests in other historical periods, including ancient Greece, Rome, China, and Japan. Certainly the idea of the Spartan warrior statue came from the museum, which for many years displayed a similar “Etruscan warrior” statue of dubious origin; the museum later removed it when experts deemed the statue a fake. Many illustrations in the revised Trapped in the Museum came from the Met’s photographic collection of its holdings, part of an Open Access initiative placing such images in the public domain available for use on a personal or commercial level. In some ways the solitaire adventure gamebook stands as a small tribute to the role the Met has played in enriching my interest in history.

I recently stumbled on one of those print copies of Trapped in the Museum; looking back at the original file and publication date I realized 2019 was the 20th anniversary of its release. I was coincidentally developing another solo gamebook – this one based on the OpenD6 system released under the Open Game License (OGL) by one of West End’s later owners – and I thought it might serve as an easy, commemorative project to entertain fans of the company’s classic D6 System games (including the Origins Award-winning Star Wars Roleplaying Game) and drum up interest in my most recent, more substantial solo adventure. Such “easy” endeavors often take more time and effort than one assumes: I had to translate the material from Risus to OpenD6, rework the character stats, update the layout, clean up a few grammatical and stylistic tidbits, and give it some shiny new graphics thanks to some public-domain sources I’d found. Other things have changed in 20 years. Today I can upload the PDF as a pay-what-you-want title at the Griffon Publishing Studio e-storefront at DriveThruRPG where it might generate a little pocket change in the tip jar. I can also upload it to Lulu for those like me who prefer print versions of gamebooks, even for such a short piece as a 44-page solo adventure.

I don’t care much for change, so those who still want the “classic” version released 20 years ago can find it on the Griffon Publishing Studio website “Free Downloads” page with the original Risus game mechanics (as well as additional stats for a few other games relevant at the time).

Now that this small, mostly promotional project is off my desk I can return to the larger solo adventure gamebook, The Asturia Incident. I veered off from other, more traditional roleplaying game projects to merge my enjoyment of solo scenarios with some science fiction themes I wanted to explore and a chance to wander off and have fun with “gamemastering” an adventure in a different format. I’m still fiddling with revisions, waiting on artwork, and dealing with graphic design issues, but I hope to release it in the coming months. It’s a bit more substantial than Trapped in the Museum – almost 200 entries compared with Museum’s 57 – and uses the OpenD6 system, complete with a pre-generated character and game tutorial for newcomers or old hands who need a refresher. In a way revising Trapped in the Museum has prepared me for the larger task of bringing The Asturia Incident to publication. Perhaps it might briefly satisfy D6 fans waiting for the larger solo adventure gamebook to release.