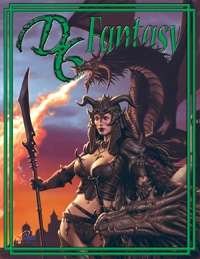 About 20 years ago I created a fantasy version of the D6 System for my own use, unimaginatively titled Fire & Ice. Those were the days after West End declared bankruptcy and laid off its staff, but a few years before its acquisition by Purgatory Publishing and the release of the D6 System trilogy D6 Fantasy, D6 Adventure, and D6 Space. This was the time in my life I refer to as my Desperate Freelancing Days as I scrambled to line up freelance game-writing work while holding down a part-time office job. Luckily I had a solid local gaming group to provide some imaginative diversion to my real-world troubles; so it was here that, seemingly on a whim, I returned to play around with my favorite D6 System in a more casual setting. 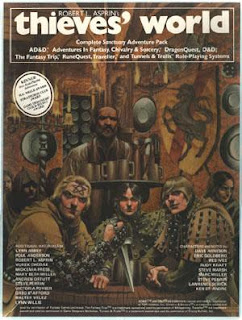 At the time I was part of a band of gaming friends who typically met every weekend for a meal and gaming session. Over the years we were together we ran all kinds of games, from one shots to short campaigns for Legend of the Five Rings and Castle Falkenstein. I had the urge to run some fantasy set in the Thieves’ World universe, no doubt after re-reading some of the anthologies and immersing myself in Chaosium’s amazing boxed set. I acquired my copy the first summer I immersed myself in gaming (1982) after reading a review in Adventure Gaming magazine and reading the first two anthologies. In high school I ran my friends through free-form misadventures in the city of Sanctuary based solely on the encounter tables; given this strategy and my own immaturity as a gamemaster inevitably led to the party wanted by the law, hunted by enemies, and meeting a sad end in a dark, litter-strewn alley. I didn’t do much else with it for years until I re-read the anthologies and re-immersed myself in the boxed set. With a gaming group always looking for new experiences, I stepped up and volunteered to run a few scenarios in the Thieves’ World setting.

At the time I had no interest in using any version of D&D. even the recently released third edition. I wanted to see if I could port the D6 System from my much-loved Star Wars Roleplaying Game to a fantasy setting. I cobbled together two or three pages of general notes along with a character sheet (most of the key elements for D6 end up on the character sheet anyway). Fire & Ice seemed an appropriate working title given my reliance on an element-based magic system. I probably spent more time outlining a few scenarios, jotting down some character backgrounds and connections to the Thieves’ World setting, and statting out the numerous personalities in D6, putting them on cards, and finding appropriate line art to provide some visual sense of their appearance (thanks in part to the old “PC Portraits” features in later issues of Dragon Magazine...still conveniently available at a website archive). The D6 System worked fairly well in the fantasy setting with the exception of magic, always a fiddly bit; it became overly complicated as spell difficulties depended on numerous factors, with no set spells other than what the players pre-calculated for their magic-using characters. As I recall, D6 Fantasy eventually followed a similar strategy, providing a point-build spell system while offering a spell list with pre-figured difficulties. I don’t recall much about how the actual game sessions went – I doubt anyone in the group was as much a fan of Thieves’ World as I was – but I think they went well enough as adventures. The players seemed to have fun, we had a few sessions, and then I quietly set it aside for other pursuits.

Back then in 2000 the prospect of a generic D6 System core game, even one focused on a genre, had no future. At the time the original owner retained rights to the D6 System and in fact was desperately trying to parlay it into some viable business venture; I should know, having been involved in at least one of those attempts during those Desperate Freelancing Days. (Points if you can guess what roleplaying game emerged from these attempts.) Wizards of the Coast had recently released D&D third edition with an Open Game License (OGL) that let nearly anybody, under certain restrictions, sell content for it; no established roleplaying game publisher would have considered trying to buy the D6 System, especially with the appearance of the Open Game License (OGL) they could, under certain restrictions, create and sell content for the newest edition of D&D. (Yes, I contributed to some of those in my Desperate Freelance Days, too.) Even if I had the rights to release D6 materials, I didn’t have the publisher’s infrastructure and distributor contacts to do so, these being the days before the electronic storefronts of DriveThruRPG dominated the market, when independent publishers had few venues to disseminate their work. Eventually Purgatory Publishing acquired West End’s remaining properties, including the D6 System...and years after that finally released the system into the wild under the OGL.

Of course I still think highly of both the D6 System and the Thieves’ World boxed set. I featured Thieves’ World years ago on my Griffon’s Aerie website as one of my “Top 5 Most Inspiring Game Supplements.” And I still prefer the D6 System when I’m running Star Wars or pulp adventures. The OGL enabled a slight resurgence in D6 activity, including a number of generic rules sets and specific D6 games, a few issues of a PDF magazine, and my own meager return with an update of my old solo adventure Trapped in the Museum and a new solo adventure gamebook, The Asturia Incident.

As part of my Thieves’ World Fire & Ice campaign I prepared some background motivations players could choose for their characters. Each one included places or characters from the setting to give them some immediate opportunities to interact with the environment. Folks who aren’t familiar with the Thieves’ World stories or boxed set won’t gain much from these, but change the proper names and they might work as motivations for any roleplaying game characters.

Revenge on Tempus: Years ago your family, friends, fiancee, or village was wiped out by the Hell Hound Tempus. Somehow you survived by escaping, hiding, or having left home already. Since then you’ve sought revenge against this Imperial knight. Unfortunately Tempus enjoys the support of his god, Vashanka, god of violence, who’s made him virtually invincible to mortal attacks. You’ve tracked Tempus to his new posting in the backwater city of Sanctuary. He’s serving as one of the Prince-Governor’s five elite bodyguards, the Hell Hounds. You seek revenge against him; but since you can’t possibly survive a direct challenge, you might try another route, finding some way to blackmail him, or gaining the support of a rival god to support your efforts. 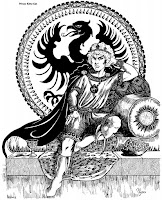 The Prince’s Treasure: Sanctuary is a virtual world of thieves, so for you, its allure was natural. And while there’s plenty of wealth to purloin from the city’s residents, there’s even more in the Prince-Governor’s palace. Besides, nobody minds stealing from him, because nobody really likes him or his radical civil policies much. Perhaps you’ve heard of some fantastic treasure locked away in the Prince’s most private chambers you could sell for enough gold to live like a noble. Or maybe someone in the caravan that brought you to Sanctuary needs a skilled thief like you to infiltrate the palace to steal some other treasure to benefit you both.

The Cryptic Scroll: You’ve obtained an interesting scroll in a fancy leather case. Maybe you stole it, or perhaps you inherited it as your family’s prized possession. You might have even bought it as an item you found interesting at the time. Your only problem is you can’t read the scroll...and neither can anybody to whom you’ve shown it. It’s a fancifully decorated parchment, beautifully illuminated, with words in an unknown language. Chance, fortune or fate brought you to Sanctuary...perhaps among all this rabble at the edge of the Empire you might find a sage or scholar capable of deciphering this scroll.

Mage’s Apprentice: Although you have some basic magical ability, you aspire to become one of the Empire’s great wizards. But to increase your skills you need a good teacher. (In game terms, you cannot spend Character Points to increase your Sorcery skills until you find someone with greater skill to teach you....) You’ve come to Sanctuary seeking some of the wizards here, hoping to win their favor and gain their tutelage. Now you just have to figure out who those sorcerers are, where they live, and how to gain their good graces...assuming mages have good graces.

The Trained Blade: In the Imperial capital you heard stories of a gladiator named Jubal, a slave who fought in the arenas years ago, vanquishing opponents and eventually winning his freedom. He was rumored to be the greatest warrior of the gladiator pits, proficient in numerous weapons and fighting styles. You hope to become a great weapons master yourself. When you heard Jubal might be living in the backwater city of Sanctuary, you decided to journey there, hoping to find him and convince him to train you in swordsmanship.

The Face of Misery: You possess some obvious physical disability or weakness – facial scarring, a shriveled limb, lack of voice (or tongue), etc. You may have had this disability from birth or it might have been inflicted on you by someone on whom you seek revenge. This disability causes others to shun you, abuse you, and otherwise treat you like a non-person. You’ve been driven from village to town, never finding a home or shelter. Until you heard of Sanctuary, a haven of rotting filth filled with cast-offs, untouchables, and thieves. You’ve traveled to Sanctuary seeking some way to heal or alleviate this disability through magic, the healing arts, or intervention by the gods.

A Noble Aim: You’ve heard Sanctuary is a city of opportunity. For whatever ulterior motive, you’ve decided it’s the perfect place to hobnob with members of the Imperial bureaucracy and nobility with the hopes of someday joining their ranks and living the high life of fine clothes, good food, and luxurious accommodations. Besides, highly placed officials and nobles often obtain other benefits: the ability to dip into the state funds for their own projects; the privilege of ordering everyone else around; and a certain aptitude for disregarding the law when it suits them.

Doomed Destiny: All your life you’ve felt cursed. Bad things seem to happen all the time. Maybe this is just your own rather paranoid perceptions of events in your life, but deep down you feel there’s more to this feeling of perpetual dread. You’ve heard of seers and fortune-tellers living in the city of Sanctuary. Stories abound of powerful mages there who often exact exorbitant prices for their services. Priests of the various gods vie with each other for the souls of the citizens. Perhaps one of these people holds the key to revealing the cause of the unfortunate happenings in your life, whether they’re caused by a curse, the whim of the gods, or plain bad luck.