Having Fun with Cruel Seas 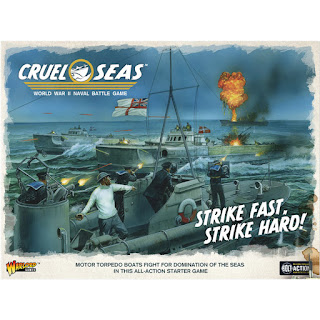 I’d been on the fence about getting into Warlord Games’ Cruel Seas since it released in late 2018. The game focuses on small-craft naval engagements in World War II featuring such vessels as the American PT boats and German Schnell-boots (“fast boats,” or S-boats). I’d read about various issues folks had with the game, but eventually I put it on my wish list and received the starter boxed set as a gift during the holidays. I’ve played a few solitaire games to familiarize myself with the rules (though I haven’t managed to paint the ships yet), enough to formulate some opinions. Most of my issues with the game relate to elements I feel might have been handled differently, primarily from the perspective of catering to newcomers or improving the product quality. Despite the expense to buy into the game, Cruel Seas offers a beginner-friendly, accessible wargaming experience for those interested in this kind of WWII naval skirmish. 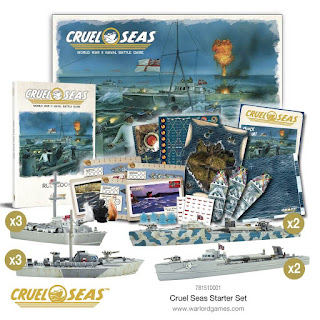 The starter box certainly packs some good-quality material, enough to play many scenarios without having to purchase additional ships: the full-color rulebook; sprues to build six British motor torpedo boats (MTBs) and four German S-boat models at 1:300 scale; a sprue of torpedoes; a painting guide; a sprue of water plume markers; stuff for marking smoke and fire; cardstock flats printed with shorelines, a tanker, planes, mines, tokens, and rulers; punch-out wake markers noting speeds; ship stat cards and markers for hull points; a handful of dice; and a large, double-sided three-by-four-foot poster printed with waves as a play surface (on side gloomy Atlantic, one much brigher for the South Pacific or Mediterranean). For $80 retail that’s a ton of material. Assembling the boat models took a little time (and deciphering the sprue parts charts), but the basic rules were not so overly complex so I was playing in relatively short order. Each turn players draw dice (one marked with their nationality for each boat) to determine who gets to activate a boat. They can then move, turn, and fire using fairly basic rules. Movement depends on one of three speeds, with a 45-degree turn allowed after moving one-third of their full speed. I learned pretty quickly that “combat speed” (the middle one) is preferable to “full speed” (the fastest) which gives a penalty when shooting. Hitting targets with gunfire requires a single d10 roll against a difficulty number (5) modified by numerous conditions (like the aforementioned “full speed” handicap); roll less than or equal to the number to hit, then inflict damage by rolling a number of six-sided dice. Overall a fairly easy core system to learn with few fiddly bits. Additional rules cover torpedoes and the numerous other factors that might crop up (using smoke, depth charges, aircraft, etc.). It didn’t take me long to get the hang of the system. After two games pitting two of the British boats against a single German S-boat I decided to throw a German tanker into the mix for two games. The rules seem easy enough for me to teach friends who have an interest in World War II and even my 10 year-old son.

Along the way I noticed a few concerns as well as some things I might have done differently. Certainly nothing to keep me from recommending this game, but some issues potential customer should know about:

Errata: Apparently the rules were so hastily released they necessitated an 11-page errata document released not long after the game was published. I personally didn’t notice anything amiss until I started wondering how much more damage a double or quad gun caused...the modifiers are absent in the “firing” section of the rules but made it to the Quick Reference Sheet damage list in the back of the book. Little inconsistencies like this pop up occasionally, but I found few that significantly impacted gameplay.

Torpedoes: For a game about motor torpedo boats, torpedoes remain rather finicky. For starters, they’re ineffective against shallow-draft vessels like other MTBs. One can only fire them after a boat makes its full move and they simply launch; they don’t move forward until that boat’s next activation. This means the target may have time to maneuver out of the way, or even (as was the case in one of my games) that the firing MTB is destroyed before the torpedoes go very far (since they don’t move until that boat’s next activation...). The torpedo markers themselves tend to swerve around the poster play mat, though I expect they’d hold their positions better on a fabric surface. Assuming they impact with a target – they must make a successful to-hit roll like any other attack – they still have a chance to turn out a dud; but if they hit, they inflict a sick amount of damage (16D!).

Fiddly Models: While the models are nice, they take some figuring and finesse to put together. The starter set includes no instructions, only a diagram of each sprue with a list of what pieces are which components (and sometimes an indication which model they belong with). Some pieces were extremely small. Some I feared would break when I cut them from the sprues. (The Japanese MTBs I ordered later were cast in white metal and were especially fiddly, with one mast breaking even before I cut it from the sprue.) The sprues for German ships didn’t include enough guns to outfit them according to the rules, so I just substituted a 20mm flackvierling (quad anti-aircraft gun) for the 40mm cannon the rules and stat cards noted as the S-38’s aft gun. All that said, the models look great, even unpainted.

Aircraft Rules: These advanced rules disappointed me slightly. They provide for an airplane to make a run across the board at a pre-determined turn and attack with bombs or torpedoes. Enemy vessels can make anti-aircraft attacks before the plane strikes, possibly causing it to abort the run or crash; only then does the plane roll to hit and damage the target. I recall many PT boats encountered Japanese aircraft in the Pacific and that strafing runs also proved deadly. This is one aspect I might change in my own games, giving aircraft additional attacks with machine guns.

Like any wargamer I’ve already devised a few adjustments to make an already enjoyable game run a bit more smoothly and cater to my particular interests: 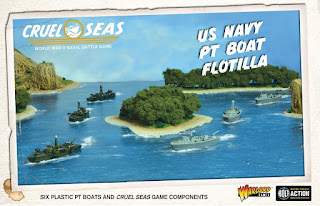 Pacific Theater: Although components weren’t included in the starter set, the Cruel Seas rulebook provides game stats for numerous ships from each navy. My primary interest in this kind of combat focuses on American PT boats against Imperial Japanese Navy forces. Relatively easy enough. I’ve already added a pack of American PT boats and IJN patrol craft; both sets come with wake markers to note speed as well as stat cards for each craft. Though I’ll run some test engagements between the two my real interest is sending the PT boats against larger targets. The starter set includes a very nice tanker flat...which gives me the idea not only to scan, print, and mount one more of those for an additional target, but to find a good top-down view of a Japanese destroyer for a more daunting adversary (alas, I’ll have to craft my own stat card for that one). At least until I can acquire suitably scaled models for a more realistic tabletop experience.

Torpedoes: As finicky as I find the torpedo rules, I may use them as written with one exception...if the boat that launched them is destroyed before they get to move, the torpedoes move once along their original trajectory (probably on that player’s next activation or, barring that, the end of the turn). They still require a roll to see if they’re a dud, but this gives them a little more of fighting chance.

Aircraft: Although I haven’t fielded aircraft yet I expect they’ll play a role in any Pacific Theater campaign. I’m modifying the existing rules to accommodate strafing with heavy machine guns, with damage to reflect the armament of a particular aircraft. I’m considering allowing a second pass (“He’s coming back around!”), assuming the aircraft survives the first pass, especially considering the point cost for game balance, the movement and turning restrictions, and the possibility reaction fire from flak guns to repel the attack. Either that or I should add several aerial attacks for a scenario.

For all I’ve seemingly complained about the game I’m truly enjoying Cruel Seas and intend to continue with it in my historical miniatures gaming repertoire. The game relies on very basic rules with more advanced options to add on later. I like the randomized initiative system. The core “move and shoot” mechanics work well enough to create engaging games with some tension and uncertainty about who will ultimately win. Although it focuses on small patrol boat actions it includes rules for submarines and freighters (primarily as targets), warships as large as destroyers, and aircraft, so it offers many different levels to explore.

When I opened my starter set and looked through the contents I realized that, instead of having three stat cards each for the British Vosper I and Vosper II MTBs I had six for the Vosper II. I e-mailed Warlord Games’ customer service and had a response within 24 hours. They sent along three Vosper I stat cards, no fuss, no questions asked. Although it took a few weeks coming by post from England, they arrived in good order. In the Internet Age, when it’s easy to ignore e-mails and hide behind a website facade it’s nice to know friendly customer service still exists.