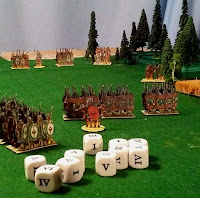 Last time I documented my immersion in wargaming ancient Romans against Germanic tribes. I had everything ready to begin gaming: lots of reading to put everything in historical context; some starting forces of good-looking Peter Dennis paper soldiers; a set of familiar rules to try; even Roman numeral dice. During my historical and rules reading I’d taken breaks to construct my paper armies. I’d assembled two forces: a Roman expedition consisting of legionaries, auxiliary infantry, and a commander and a Germanic force of barbarian infantry, light infantry archers, light cavalry, and a chieftain. Just enough for a game as I glued, cut, and based more paper soldiers for future engagements.

Although I started raising my armies from scratch I was already well-supplied by my diverse stock of wargaming terrain in a variety of scales. I set out my three-foot-square green felt, segmented into a 9x9 square grid for use with Bob Cordery’s Developing the Portable Wargame. I wanted to run a scenario where the Germanic forces funneled the Romans into tactically advantageous ambush terrain. Despite the nine-grid width of my play surface I used some swamp markers to narrow that to only three center squares nearest the Roman entry point, widening to five squares bordered by hills and woods closer to the tribesmen. From what I had read it seemed a good set-up to try some of the tactics characteristic of each side. The Romans and Germans arrayed their forces within the first three spaces on their respective sides of the field, allowing for some depth of deployment. Alas, it looked a little sparse with one stand of soldiers representing each unit in a square, but I was still prepping my legions of paper soldiers; for the time being I would have to settle for playing with what I had on hand. Unfortunately I was missing one component for my game...an opponent. So, like some of my gaming activities during this sequestered Pandemic Age, I put my mind to formulating historically based strategies I’d try to implement for running each side in the upcoming battle. 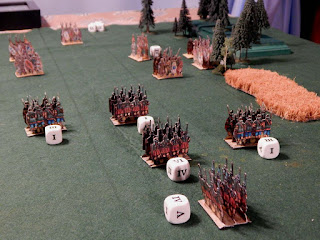 Cordery’s Portable Wargame rules use Strength Points (SP) both as a measure of a unit’s health and as an optional means to balance armies quantitatively; an army reaches its “exhaustion point” when it loses one-third of its SP, after which it cannot take offensive action (moving forward to attack the enemy). I set out to field two forces of equal strength. For my initial game the Romans fielded three units of legionaries (at 5 SP each), three of heavy infantry auxiliaries (4 SP each), and a commander (6 SP) attached to one legionary unit (a total of 33 SP and an exhaustion point of 11). Legionaries set up in line in the center, the front unit flanked by auxiliaries and the third auxiliary unit next to the second legionary unit (with the commander). The Germanic forces consisted of two light infantry with bows (2 SP each), two light cavalry (2 SP), six barbarian infantry (3 SP), and a chieftain (6 SP); as this totaled only 32 SP I upgraded the infantry with the chief to elite for +1 SP. The six infantry units set up centered in two rows, with a light archer and light cavalry unit lurking in the hills and woods on each flank as far forward as allowed.

The Romans advanced in good order, hemmed in to the center three spaces by swampy ground on the sides. At first the Germans sent the light archers and cavalry nipping at their flanks – a tactic noted in the various source books I’d read – but as soon as they moved into range the forward three barbarian infantry units charged forward, gaining a bonus for engaging in close combat after moving two or three spaces. The Romans, having been slightly weakened in earlier flank attacks, still held their ground with a few losses...but then the German chief charged into close combat against the Roman commander’s legionary unit, inflicting an SP loss and forcing a roll to see if the commander was killed. The dreaded “6” (or should I say “VI”?) indicated the commander’s untimely death; the subsequent loss of 6 exhaustion points put the beleaguered Romans past their exhaustion point and put them on the defensive for the remainder of the battle. The Germanic tribesmen pushed them back past their starting positions and eliminated the Romans before even coming close to their own exhaustion point. 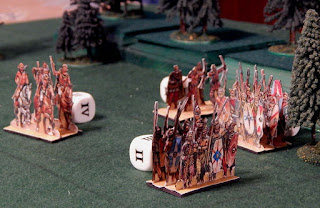 In retrospect I realize the Romans fought through a tough situation. They fielded fewer units than the Germans, though each had more strength than most of the enemy units. With only heavy infantry they had limited movement options against the three kinds of forces the Germans fielded. Advancing closely together meant forward units had no room to retreat; in The Portable Wargame rules units taking damage sometimes have the option to lose 1 SP or retreat if possible, a choice the close order did not permit. The Romans fell prey to several poor die rolls, at first trying to fend off the flanking archers and cavalry, then when the commander failed to survive a head-on clash with the German chieftain’s unit. I also ran the Germans true to historical form, chipping away at the Romans from the flanks with light forces before charging and withdrawing with the barbarian infantry (at least as much as the dice would allow).

I took a break to prepare more Roman units – specifically a host of heavy cavalry – to see if their inclusion might give them a better chance against the Germans. I reset the battlefield, keeping the terrain and deployment parameters the same. In this second game I gave the Romans two units of heavy cavalry (3 SP each), reduced the heavy infantry auxiliaries to two units instead of three, and kept the three legionary units and the commander (for 35 total SP and an exhaustion point of 12). The legionaries remained in column as the core, but had the first unit flanked by heavy cavalry, with two auxiliary units flanking the commander’s middle unit. The Germanic forces remained the same with an additional light cavalry unit making up the 2 SP difference; they kept a similar deployment as before, with the extra cavalry off on a forward flank. 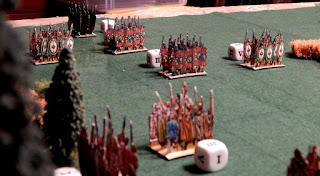 The Romans sent the heavy cavalry forward to deal with the German skirmishers on the flank while the heavy infantry advanced in a solid wall (the auxiliaries having moved up to the forward rank flanks). With the cavalry screening the infantry from skirmisher attacks, the center column marched forward to receive several barbarian infantry charges. They held up well – and their leader passed several checks when his unit took hits – but a few barbarian units maneuvered to one Roman flank and hammered away at the auxiliaries. The Romans got two-thirds of the way across the battlefield this time before hitting their exhaustion point. The Germanic tribesmen pushed them back another third before hitting their own exhaustion point. 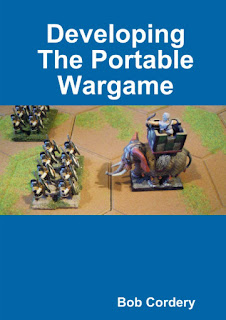 I was particularly pleased with how Cordery’s ancients rules from Developing the Portable Wargame incorporated historical elements into the core, intuitive game mechanics. I’m familiar enough with the game’s basic concepts from using it to fight battles from the American War of Independence to Napoleonic wars and American Civil War. Like any good core rules system The Portable Wargame offers many ways designers and gamers can customize sections to suit a particular period or fighting style (as evidenced by its numerous sequels like The Portable Colonial Wargame and The Portable Napoleonic Wargame). Two modifications in particular affected key units in this period. The “Barbarian Tribesmen” unit type functions as a light infantry force for movement and restrictions (they may move through forests, unlike heavy infantry), but have 3 SP (instead of light infantry’s 2 SP) and fight as heavy infantry (which gains a +1 attack roll bonus in close combat); if they move two or three spaces before engaging in close combat they gain another +1 bonus. This represents their fierce nature and the effects of a massed barbarian charge. Of course the rules also include “Roman Legionaries,” heavy infantry units with 5 SP and the ability to throw the characteristic Roman pila javelins once during the game (ranged combat not usually offered as an option with heavy infantry). Of course the rules also allow for light infantry and cavalry armed with a variety of missile weapons along with heavy cavalry, artillery, and war elephants (which, despite a lack of historical evidence, I want to send into the Teutonic woods to aid my beleaguered Romans because the Peter Dennis paper miniatures include such units).

Both battles I played went well enough that I want to continue wargaming this period. I’m thinking about setting up some kind of map-based campaign with a variety of progressive (and reactive) scenarios along with a system for rewarding victories and gathering reinforcements. Although I’m not using Neil Thomas’ One-hour Wargames rules – perhaps in the future, when I have more units to field and can perhaps convince my son to give it a try – his scenarios chapter offers plenty of inspiration for different deployment methods, objectives, and victory conditions. I’m tempted to turn the campaign into its own mini-game balancing tribal allegiances, reinforcements, a scenario flowchart, and other factors...but I really just need to keep it simple. We’ll see where that takes me in the coming weeks.

In the mean time I’m allowing my enthusiasm to fuel my development of campaign ideas, some new terrain designs (particularly for swamps), and a host of paper soldier construction. With about three stands per unit, I think I’ll have enough to run a battle using Thomas’ One-hour Wargame rules; while the ancients rules don’t have as many nuanced approaches to Romans and barbarians, they do depart from the gridded wargame format, add some key player choices for missile fire units (essentially either move or shoot), and look better with a slightly larger battlefield and more soldiers arrayed upon it.

Luckily I’ve constructed enough paper soldiers over the past few years to have implemented some of the tips from the Peter’s Paperboys website and learned from my own experience; so crafting a few more ranks of Germanic tribesmen and some other units shouldn’t take too long. In the upcoming “Paper Romans in Germania, Part III” I’ll discuss my experience constructing Peter Dennis’ paper soldiers, my mistakes, my own tips, and some ideas for orderly storage.