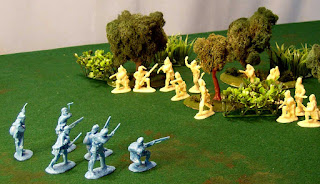 Aside from the occasional roleplaying game material – inevitably requiring a great deal of time and effort to develop and publish – the rest of my publishing endeavors these past few years have focused on miniature wargames suitable for introducing newcomers to gaming and draw kids into the adventure gaming hobby. Having recently completed a rare freelancing assignment for a roleplaying game adventure collection, I’m reviewing several project ideas vying for my attention, each of which engages my enthusiasm to varying degrees. I’ve decided to advance one of my projects to the next step. Once again I’ve indulged my interest in games for youngsters and spent some time developing Skirmish Kids. It started out as a quick game to include with some miniatures for my son, then something a bit more involved with an intent to publish. After some playtesting on our own and a good deal of writing and self-editing, I have a draft ready for anyone interested to read, playtest, and offer comments.
[Edit 5-25-21: Thanks to reader Russell Phillips, interested playtesters can now download the Skirmish Kids file in both Mobi and Epub formats as well as PDF.]
Having a son who, thankfully, has at times shared my interest in gaming (no doubt to humor his father now and then) has inspired many endeavors geared toward young people; though I nurtured approaches to entice newcomers to roleplaying games before (most notably developing the Star Wars Introductory Adventure Game and advocating solitaire tutorial adventures). His own interests in games and history have influenced my own game designs – Valley of the Ape and Panzer Kids – as well as our recreational game activities with other people’s rules, like using Bob Cordery’s Gridded Naval Wargames for Russo-Japanese War naval action (and I’m planning on using it for American Civil War ironclad battles and a World War II South Pacific patrol game both suitable for kids and newcomers). I’ve even designed a few simple board games based on subjects from his elementary school classes: the solitaire Lord of the Two Lands and Sol O.P. Grand Prix (available free at the Griffon Publishing Studio “Free Downloads” page).

I’ve discussed much of my motivation, rationale, and inspirations for Skirmish Kids before. During the subsequent months I’ve worked on the nuts and bolts, letting notes and procedures coalesce into rules, putting things in a logical order, expanding some helpful sections to inspire kids to play. I start newcomers with basic, core rules, then encourage them to add more advanced concepts as they grow more familiar with the system (a method I discussed long ago in “Basic & Advanced Rules”). I’m taking a similar approach to the one I used developing and publishing Panzer Kids. A very brief “basic” game – offered as a free/pay-what-you-want PDF – would teach core concepts and allows kids to play out simple skirmishes. The more “advanced” version – sold as a PDF, possibly even print-on-demand – would include the basic rules and optional rules to add greater depth to the play experience. 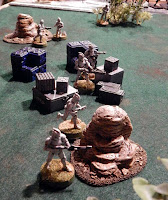 Having written and organized the rules as I felt best to present them to young readers, I laid out the text, inserted in a photo or two, formatted some helpful sidebars, and dropped everything into a PDF for easier distribution. I’ve played the game a few times with my son over the holidays – when he received a set of Star Wars clone troopers and battledroids I’d assembled and painted for him – and the experiences offered some insight into some rules modifications I’ve worked into my current draft. I’m hoping to do more playtesting with some of the World War II Japanese infantry and British jungle soldiers we’ve bought (and I’ve painted) over the years. But the time has come to put the rules out to interested parties to run through their playtesting paces.

Although I’m relatively happy with the overall game I’ve developed, I’m still not entirely satisfied with all the rules. I’ve waffled on the distance for movement – provided for both 54mm and 25/28mm scales – for which, theoretically, one should be twice the other, but which doesn’t really work on the table. My formatting conventions for core game terms require consistent application (if any unusual formatting is warranted at all, a point I’m still debating in my head). I’m always interested in playtester comments reinforcing my own views, catching errors, or challenging sections for some deeper thought and possible revision.

I still have a ways to go to reach the point where I feel it’s acceptable to young players. Most core concepts still require examples to demonstrate how they work, along with photographs of my miniatures in action. I’m not sure each special rule requires an example, especially since most consist of one-line rules amendments. Maps for each basic scenario’s set-up might take up too much space relative tot he text, though longer, period-specific scenarios in the advanced rules might better support that.

I have to reign myself in at this point and stay within my original parameters. My enthusiasm can sometimes run off into the wild blue yonder of possibilities despite my best efforts to stay on course. I’d love to develop rules for vehicles in modern/sci-fi skirmishes and even expand the rules to allow for running pulp adventures with factions of heroes and villains...but those will have to wait for another day. (Though I’m sorely tempted by the pulp prospects....)

But overall I’m comfortable releasing this playtest version of Skirmish Kids for folks to try...preferably with the younger gamers in their lives. I’ll continue developing it, see what playtester comments come in, and work to bring it to publication so we can try drawing more young people and other newcomers into the adventure gaming hobby.