“A great life is to be able to ebb and flow.” 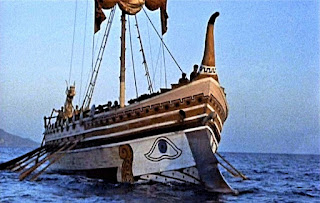 People’s involvement in the adventure gaming hobby ebbs and flows with the tides of their lives. Many enter when they have leisure time to spare, often in middle or high school, sometimes in college. Others immerse themselves in it as an adult hobby, a relief from the trials of everyday life. Some people drift away from gaming and never return; many set it aside for a period and return to it later with renewed energy and a different perspective. For some of us it’s a creative outlet whose output fluctuates depending on inspiration, energy, and opportunity. Although I’ve long cultivated an interest in the adventure gaming hobby across the wide gaming spectrum – roleplaying games, board games, wargames (both with boards and miniatures), even card games – my focus has ebbed and flowed depending on my own life’s circumstances. As I look back on my gaming activities during the past pandemic year – limited as they have been by social distancing and other precautions – I realize I’m undergoing a shift in my gaming tides.

When I first discovered roleplaying games in junior high school I immersed myself in Basic/Expert Dungeons & Dragons, Advanced D&D, Traveller, and later most anything else TSR released (primarily Top Secret and Star Frontiers). In high school I dabbled in others games like Call of Cthulhu, Pendragon, and Tunnels & Trolls. During those halcyon days – with afternoons devoted to gaming before dinner and homework – I tried board wargames and miniature wargames. I had time to create my own roleplaying game adventures and supplemental materials while creating a host of unsophisticated board and card games indulging my varied interests. I even published an admittedly horrid gaming fanzine.

College life put gaming on hold. Although my college hosted a D&D club I was too timid to check it out; I was too busy adjusting to a completely new way of life, immersing myself in my studies, and navigating the awful social dynamics that emerge whenever hordes of humans are forced to live in a close and closed environment. Summer breaks allowed some time to explore new games – most notably Paranoia, Cyberpunk, Space 1889, the James Bond 007 roleplaying game, and, eventually, Star Wars: The Roleplaying Game – and enjoy some intense gaming with old friends. These last few games helped bring about a shift in my gaming style, from map-based, hack-and-slash dungeon crawls and shoot-em-ups to games more focused on narrative and characters. It was a significant evolution in my roleplaying game style (perhaps the subject of a future missive). These ultimately set me on a course to work as a roleplaying game writer and editor.

After college my job as a hometown weekly newspaper reporter and editor left me little time for gaming, though I managed to find some during the summer with friends home from college. But both the job and gaming prepared me for my next evolution. My five years at West End Games proved the most fruitful creative period of my life with a host of professionally published roleplaying game projects. My gaming during this time understandably focused on company products, whether playtesting new concepts or running games at conventions. After the company went bankrupt I was fortunate to move to an area where I found a core group of gaming friends. We gathered each weekend for a home-cooked meal and a solid game session. I managed to explore some new games, though few really grabbed my interest (Legend of the Five Rings stands out as one I particularly enjoyed).

Married life and later fatherhood initiated yet another shift in my gaming. Though I worked on contract projects and my own game productions amid odd office jobs (a continuation of my post-West End “Desperate Freelance Days”), I found precious little time beyond the occasional one-off roleplaying game session or a board or card game with casual gamers. I shifted more to board and wargames; both required less time to prepare for and play, and miniature wargames allowed me to enjoy the solitary aspects of the hobby painting minis and crafting terrain. In the years I’ve been a parent much of my interest has centered on gaming with kids (and, secondarily, newcomers to gaming). It’s become a primary cause for me now; I’ve even designed a number of games specifically with kids (and newcomers) in mind, most notably Panzer Kids. 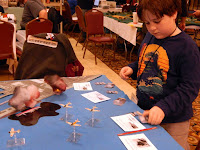 The close proximity of a few wargaming conventions offered some family activities as well as a different gaming outlet to explore (though I’d dabbled in it over the years). I started attending these on my own to indulge my hobby whims, later bringing my son along for what grew into a fulfilling father-son outing. While I continued pursuing games that engaged me, I also looked to expand into experiences my son could also enjoy that didn’t necessarily fall among my various interests: American Civil War naval battles, pulp jungle exploration, Russo-Japanese War naval battles, the World War II Pacific campaign. Of course, these, too, soon drew me in as well, to become shared games we could enjoy together as a family.

I’ve also delved more into solitaire games of all sorts. I’ve experimented with solo roleplaying games, primarily running some of my favorite games from the past in solitaire mode but also trying out a few games made exclusively for solo play (as well as having fun with the occasional solo game book). I’ve tried a few solo board games and board war games. Of course, I’ve also tried both board and miniature wargames playing both sides to familiarize myself with the rules and find some fulfillment playing games I’ve not tried before.

Frequent readers might notice a shift in my writing away from roleplaying games toward other subjects, primarily wargames and games for kids. Certainly I still enjoy playing and creating for roleplaying games, but the shine has dulled more now than at any other point in my life. Part of this comes from the lack of a player group, regular or otherwise, though I’ve had hopes and attempts over recent years. Part of this ennui comes from fewer opportunities for freelance work for roleplaying games for which I’m both qualified and interested; I’m grateful for the recent assignments I’ve enjoyed, even if they’re few or far between, and they’ve proved rewarding both in the creation and ultimate publication. No doubt some of this malaise is a symptom of more than a year of pandemic precautions, restrictions, and privations.

Despite drawing my time and energy away from other projects, Hobby Games Recce has served as a platform where I can express my opinions and simplistic insights on any aspect of the adventure gaming hobby that interests me. It offers limited engagement with others online – and limited encouragement – but far more and more frequently than occasional game materials released into the howling cacophony of the internet. No doubt my interests and energies will continue to ebb and flow over the great sea of the adventure gaming hobby; in spite of my best efforts to steer a determined course, I may just have to sit back for a while and see where the currents take me.

“We are more than the hobbies that we do or the things that we like. To me, Geek means an outsider, a rebel, a dreamer, a creator, a fighter. It’s a person who dares to love something that isn’t conventional.”