“The creative mind plays with the objects it loves.”

I’ve extolled the virtues of Armies in Plastic figures before but never featured the company in a post all its own. Goodness knows I’ve mentioned these 54mm (1:32 scale) plastic soldiers enough during the past 10 years when I used them in various projects. Now that the company’s having a summer sale (ends June 30) it seems as good a time as any to talk about the large-scale historical miniatures it offers, good for young wargamers and seasoned grognards.

These 54mm soldiers come in solid-colored plastic sculpted with enough detail one can identify them with a particular historical period. They range from 18th century conflicts (Seven Years War, French & Indian War, American War of Independence) throughout the 19th century (War of 1812, Franco Prussian War, various British colonial wars), and even into the 20th century (World War I, Rusian Civil War, and, a large jump over WWII, modern forces for the War on Terror). For some periods different forces are the same figures cast in different colors; for instance, AWI redcoats are red, patriots are blue, even though both have the same mix of poses. But most series include entirely original figures: rangers and Native Americans for the French & Indian War; numerous British colonial adversaries (Zulus, Afghan tribesmen, dervishes), several kinds of British colonial troops (including kilted Highlanders), even Germans in pickelhauben and later-war stahlhelme for WWI (to name a few with which I’m familiar). Prices have fluctuated over the years like any other consumer goods. A box of 20 infantry or 5 cavalry used to hover around $12.95, though frequent sales or deals brought that down. I’ve seen them at convention and toy soldier show dealers around $15. The past few years I’ve noticed newer sets with only 18 or even 16 infantry; now it seems all infantry sets include only 16 soldiers (two each of eight poses), though “Bag Sets” and “Battlefield Combo Series” packs often include a few more (and a nicer mix of infantry, artillery, and cavalry, depending on the period). Those ordering online can expect to pay shipping equal to a pack of figures (right now it’s $8)...though if one meets a minimum order threshold ($100 seems a longtime standard) shipping is free. In lieu of sales the company sometimes offers free “bonus” packs at different thresholds, sometimes of the buyer’s choice and other times a random pack of 20, 30, or 50 figures. One can also order random packs of various sizes and prices; they’re fun to see what you can use to bolster existing forces and make great gifts for kids inclined toward toy soldiers but not yet well-versed in historical wargaming. On occasion I’ve received these packs, picking out some soldiers for my own periods, donating a pile to my son’s toy soldier bin (I’m looking at you, tons of Boxer Rebellion figures), and even sending some along to other gamers who focus on different wars than me. 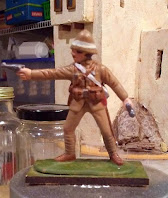 It’s easy to disappear down a rabbit hole exploring Armies in Plastic’s offerings on its website. Most periods offer infantry (16 figures), cavalry (5 horses and 5 riders), and artillery (typically one gun and a five man crew). Lately the company has packaged different mixes to better suit customers’ needs. For instance, one might buy a set with two cannons but no crew, or a set with 10 artillery crew but no guns. Unsure what to get when delving into a new historical period? Check out the themed mixes of figures in the “Bag Sets,” “Battlefield Combo Series,” and “Special Sets” sections (note that some sets, including most “Special Sets,” have a higher price point as they can contain more than the usual number of figures). Most of these packs include a mix of figures from two sides in a conflict, sometimes all infantry, other times infantry, cavalry, and occasionally artillery. The French & Indian War “Battlefield Combo Series” includes 8 rangers and 12 Native Americans (though one of the “Bag Sets” for that period also includes 2 mounted figures for the same price). Look around and compare the mixes in each period’s packs between “Bag Sets” and the “Battlefield Comb Series” to get the right variety and number of figures for your needs.

Armies in Plastic figures make particularly good gifts for kids with an interest in toy soldiers, history, or wargaming. Two reasonably priced packs representing two sides of a conflict can supply enough soldiers for period skirmishes (about 16 on a side). Or go with a “Bag Set” for a sampling of figures from a historical conflict. Veteran wargamers might enjoy painting them before deploying forces to the wargaming table. Most infantry could use a more solid base with a heavy washer or MDF base. Coating them with Mod Podge, Plasti-Dip spray, or other primer can provide a base for painting.

I have used Armies in Plastic figures for numerous gaming endeavors over the years. I’ve tried various rules for French & Indian War skirmishes with them. My hordes of British colonial soldiers gave me a chance to test-run (and modify) Neil Thomas’ One-Hour Wargames rules (and I’m planning on using more in similar battles in the future). I used these figures developing my Valley of the Ape game specifically because they’re great for kids games; the colors make identification easy and they stand up to a good deal of handling (or mishandling) by younger players. They’re also good for quick playtests of my Skirmish Kids rules still under development; each set has a nice mix of forces to easily set up on the table (and just as easily clear off in combat). I still find their allure difficult to resist. I recently found some WWI US Marines and hope to pit them against some Germans I’ll include in an upcoming order taking advantage of the summer sale.

Certainly other companies produce 54mm plastic soldiers. Many cover periods Armies in Plastic doesn’t. But Armies in Plastic makes quality soldiers from a wide range of historical periods, often sold for affordable prices, and delivers them with good customer service. I’ve probably purchased more sets than I really should have over the years, but every time the parcel arrives within a week, undamaged, and properly filled.

I have few qualms with Armies in Plastic. Their ranges cover many historical periods in which I’m interested. Even without sales and with fewer figures in packs they’re a good deal. Occasionally I have to straighten a warped weapon, but the trick dipping them in boiling water for a moment, straightening the warp, and setting it in cold water generally works. Certain periods suffer from chronically out-of-stock product, notably Zulu warriors and British colonial camel corps. Sometimes I wish they’d expand their lines to other historical periods in which I dabble: ancient Egypt, Greece, Persia, and Rome; dark ages Europe; and World War II forces (opening a big can of worms given the huge variety of troop types one must cast with historically accurate uniforms and equipment). But these remain petty concerns for a company whose product have enhanced my gaming activities immensely over the years.

“Life must be lived as play.”