“Toys are a caricature of reality.” 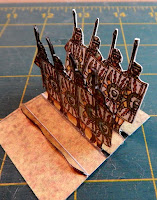 I’ve had some occasional discussion lately about making the miniature wargaming hobby more accessible by – gasp! – playing with more easily acquired components than fully painted miniatures with diorama-quality terrain pieces. The amount of expense and effort can intimidate some who might otherwise dive into the hobby. Sure, it’s great to have painted miniatures and crafted terrain and play with them on the table; but buying and making them no doubt puts many off of the hobby by their sheer expense and effort. I started considering options to miniature soldiers and realistic terrain that could provide a satisfying play experience with minimal work. What options could I find to entice kids and newcomers into the miniature wargaming hobby that might fall into the realm of enjoyable craft projects they can then take to the table and play with? I’ll admit I was only partially successful; I failed to suppress my urge for more elaborate and realistic looking components.

Certainly gamers can use the most basic of homemade pieces in their miniature wargames. Those familiar with the rectangular symbols for infantry, cavalry, and artillery (sometimes called NATO symbols for their more recent iteration) can simply print up several on appropriately sized pieces of cardboard. Players might draw the troop types onto the flat piece, too, or render them on a piece of paper or card and fold it like a tent card for stand-up soldiers. Maybe one piece stands for an entire unit. Several pieces could also represent one unit, covering more ground and allowing players to remove sections to represent casualties or diminished combat strength. Flat terrain in a “top-down” view could enhance a flat battlefield: tress, hills, swamps, roads, buildings, and such, almost like map symbols. My one note here: flat pieces present problems in picking them up from a surface and moving them around the battlefield. Mounting pieces on appropriately sized corrugated cardboard or even wood scraps (Jenga and mini-Jenga blocks work well) provides some three-dimensional height to allow for easier manipulation. 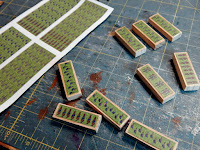 I turned to mini-Jenga blocks for one of my first forays into easily crafted units with a bit more depth. Juniorgeneral.org offers an entire section of “top-down” representations of units from various periods and conflicts. Rather than simply use them as presented (most on one-inch square pieces), I combined and altered them in a graphics computer program to fit one side of a mini-Jenga block (available in a generic brand at many dollar and craft stores). Since I was focusing on the American Civil War (ACW) at the time, I assembled sheets of Union and Confederate infantry, cavalry, and artillery. They looked good enough, though with uniforms so tiny I found it difficult sometimes to distinguish between the two different sides. 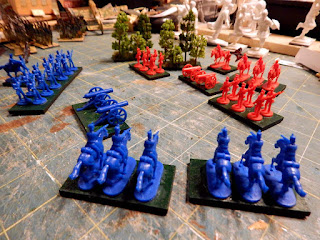 My next experiment required me to order some materials online. I wanted to make stands of of game pieces depicting the three kinds of units in different colors. On Amazon I found a replacement set of pieces for Risk, which include Napoleonic-era infantry, charging cavalry, and cannon. I also remembered seeing sprues of soft plastic Civil War soldiers at Eagle-Gryphon games (the horses to mount cavalry soldiers are sold separately), so I ordered a few of these. I also wanted bases more firm than simple cardboard, so I orderd some 50x25mm MDF bases from The Phalanx Consortium. The Risk pieces fit nicely onto these bases: eight infantry (four abreast in two ranks), three cavalry, and two cannon. The larger Eagle-Gryphon pieces fit four abreast for infantry, three for cavalry, and one (on a larger 40mm square base) for a single cannon. They look better than flat depictions of troops with a slightly larger expenditure of money and effort.

Alas, I could not leave well enough alone. Before attaching soldier game pieces I gave the bases a quick coat of green spray paint. (Craft Note: I scratched the paint on the bases where I intended to glue plastic game pieces and roughed up the piece bases with a file so they’d adhere better when I glued them.) My need to add more complexity and utility drove me to insert magnets into each base to better facilitate tidy storage on metal strapping I glue into plastic boxes...though this also allows one to play on surfaces like white boards and the sides of refrigerators. 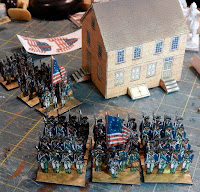 Perhaps the best return on cost and effort comes from Peter Dennis’ paper soldiers. I’ve sung their praises before. They’re a quick way to create good-looking armies to try out different historical periods, as evidenced by my foray this past year into Roman clashes with Germanic tribes beyond the Rhine. After investing in a book from which one can photocopy soldiers onto cardstock – around $20-30, if you can still find the ones for the American War of Independence (AWI) or Civil War – or some downloads from Dennis’ accessible and affordable Peter’s Paperboys website (which includes ACW soldiers and terrain), gamers simply print, glue, and trim ranks upon ranks of soldiers. Dennis’ vast experience as a historical artist for Osprey Publishing and others goes into the vast variety of troops available for each conflict, including Hessians for the AWI and US Colored Troops for the ACW. He even includes trees, earthworks, and period buildings to enhance the battlefield. To me they offer the best solution combining acceptable cost, relatively easy crafting effort, and maximum visual effect. Wargame Vault also offers a host of paper soldiers of varying price and quality online, some in ranks but many as individual soldiers. The American Civil War set from Billy Bones Workshop offers massed ranks of troops as well as terrain items to print and assemble.

I suppose I could offer specific tutorials on each of these methods, with step-by-step instructions, tips, and photos; but so many different approaches exist that I encourage folks interested in the miniature wargaming hobby to try a few different methods and pursue the one that works best for them in terms of budget, effort, and effect.

These recent experiments with different “pieces” to represent units and terrain reflect my current preference for rules. I’m preparing game-piece armies for use with Bob Cordery’s Portable Wargame and its numerous specific variants as well as ones for Neil Thomas’ One-Hour Wargames (my current go-to game for kids and newcomers). For Portable Wargames one base can stand for a single unit; for One-Hour Wargames I use three similar bases to represent one unit of infantry or cavalry. I enjoy the flexibility of using the same pieces for both games, even if I need more bases to play One-Hour Wargames.

Much like roleplaying gamers can use various objects to physically represent their characters’ locations in an encounter environment – chess pieces, paper minis, game tokens, and even highly detailed painted metal miniatures – so too can wargamers use various representational pieces to indicate type and position of forces. Playing with pieces with abstracted representations of different troop types and basic terrain markers is certainly easier than purchasing and painting elaborate, detailed armies. Such seemingly simpler efforts still require time and effort to craft. They allow players to get a game to the table faster, especially when interested in trying out new rules before prepping more elaborate armies. For some people gaming with whatever they have on hand – or can easily acquire with minimal cost and additional effort – works fine. Others immerse themselves in the hobby, some of which includes playing games, but much of which can involve crafting game components, primarily painted and based miniatures as well as authentic-looking terrain. Many who’ve been around for a while – what those in wargaming circles call “grognards,” referring to the seasoned, grumbling veterans who fought with Napoleon through his many campaigns – maintain purist views that no unpainted minis march across the table, that terrain be as realistic (or consistent in style with other components), and that more complex rules provide a more accurate and satisfying experience. (Of course I’m making broad generalizations here; gamers fall all across the spectrum, their preferences varying even among different game rules and periods.) The bottom line remains doing what works best for you, balancing time, money, effort, and effect. As with many games, it rarely matters how you play, but that everyone’s having fun.

“Pleasure in the job puts perfection in the work.”