Collect All the D&D

“We like lists because we don’t want to die.” 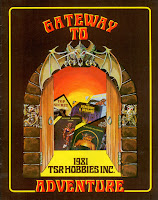 For many the yuletide holiday season involves lists: lists of ingredients for traditional meals; lists of things to do in preparation for whatever winter holiday we celebrate; and lists of gifts, both that we hope to receive and that we’ve accumulated to give to our friends and loved ones. In the weekly hometown newspaper I use to work for we’d run a story every December about the various letters to Santa the local post office received, getting some idea what kids were asking from Santa that year. Kids send their lists of desired toys to Santa, while St. Nick himself keeps a list of who’s been naughty and nice. During this season of list-keeping I look back to my own idyllic youth to a list, of sorts, I kept: the 1981 TSR Hobbies, Inc., “Gateway to Adventure” catalog that came in the Basic Dungeons & Dragons boxed set I got as an Easter gift in 1982.

Here was a finite list of everything every good gamer needed, a complete accounting of all TSR publications available at the time. Although one might argue the text was dry advertising copy, every full-color illustration popped off the page, however small, with artwork evoking the potential for amazing adventures. As an impressionable teenager I gazed with wonder at the vast scope of not simply D&D but a host other roleplaying games, wargames, and even events like the all-important GenCon. Basic and Expert D&D had opened my eyes to the vast possibilities of fantasy roleplaying games within the context of my own imagination; “Gateway to Adventure” showed me how much more inspiration I could find in TSR’s large slice of the adventure gaming hobby. While not everything appealed to me at the time – I had little interest then for war and board games like Dungeon!, Fight in the Skies, or Snit’s Revenge (though I now regret not getting some titles, like Divine Right) – I nursed a hunger for all things D&D. So the “Gateway to Adventure” catalog served as a list for me of what publications I owned and which ones I sought to acquire. 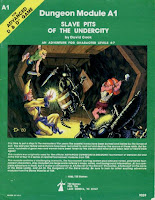 In my now long-lost copy of “Gateway to Adventure” I took a pen and drew a box next to each title I owned or wanted, checking it off if I possessed it. I saved my money and purchased some from my local hobby shop down the road (also now long-lost). Some titles I received as gifts for birthdays and Christmas. During the course of my high school years I managed to collect the three core AD&D books and the Fiend Folio; a few modules for B/X D&D beyond what came in the boxed sets; The Slavers Series of modules; the G 1-3 Against the Giants collection; the first three S “Special Series” modules; even the World of Greyhawk folio and map set. Eventually I explored other roleplaying game worlds from TSR like Top Secret and Gamma World. I read every release cover-to-cover even if I didn’t always manage to run my neighborhood friends through many modules. In the reading each one offered an escape from the troubles of my day with the potential for further adventures at the game table. With each acquisition I dutifully checked off the box in my “Gateway to Adventure” catalog signifying yet one more step toward owning everything available for D&D and from TSR at the time.

Some titles in “Gateway to Adventure,” however, eluded me, either because I couldn’t find them in retail stores or I simply drifted off to other interests (gaming and otherwise) as I focused on my college studies. I never really cared much for the consumable accessories like character sheets and dungeon master logs, but the catalog tempted me with other elusive treasures like the Deities & Demigods Cyclopedia. Others I had seen in the hands of neighborhood kids who showed them off haughtily or allowed me to borrow them: S4 Dwellers of the Forbidden City and Q1 Queen of the Demonweb Pits (though nobody yet possessed D 1-2 Descent to the Depths of the Earth or D3 Vault of the Drow). We spent an afternoon playing a friend’s copy of Divine Right which piqued my interest in wargames but which I never acquired.

Of course I soon discovered and explored other games, thanks in part, ironically enough, to advertisements in TSR’s house organ, Dragon Magazine. Sure, I bought into Star Frontiers and Knight Hawks, but I had yet to discover the vast horizons revealed by other game publishers. I’d soon immerse myself in Game Designers’ Workshop’s Traveller and Flying Buffalo’s Tunnels & Trolls...though even then, for many years, these would remain secondary to TSR’s games. Even wandering the streets of Sanctuary from the excellent Thieves’ World boxed set (still my gold standard for medieval urban settings) I used D&D characters.

Owning everything I wanted in the “Gateway to Adventure” catalog – and certainly everything TSR produced for D&D – was, alas, a simplistic aspiration. As a company TSR needed more releases to maintain its corporate survival. (I knew litter of the company’s inner controversies and troubles as related in Jon Peterson’s Game Wizards.) As I went off to college in 1986 I walked away from the cusp of TSR’s massive publishing growth; because I was so busy with collegiate studies I missed the buzz around the Dragonlance saga (though I tried reading the first novel), and had little interest in Forgotten Realms releases and other game lines intended to rejuvenate the D&D brand. The products bearing the Game Wizard logo and the TSR Wizard in the Moon logo, what I felt were my (and the game’s) “golden age,” remained imprinted in my mind as cherished parts of my gaming youth. In college my limited adventure gaming activities meandered off the path of D&D into such entertaining realms as the James Bond 007 Roleplaying Game, Prince Valiant: The Storytelling Game, Call of Cthulhu, and, of course, Star Wars: The Roleplaying Game.

All these years later I’ve managed to acquire some of those long sought-after publications to fill the gaps in my “golden age” of D&D collection. It’s much easier today with the internet and such services as Wayne’s Books, booksellers like Chris Korczak, and occasionally Noble Knight Games. Rare are stores like That’s E! in Worcester, MA, that still offer a section of used, vintage game materials. I’ve acquired some of those missing modules mentioned above, the coveted Deities & Demigods, and even one or two of the earliest Endless Quests books missing from the collection I enjoyed in my youth. I’ve mostly satisfied my hunger for these earliest D&D/TSR titles (excepting perhaps Divine Right...). But now I have a more complete collection of what I aspired to acquire in my youth and it offers me some little comfort. For here I discovered that, now I owned these titles, I had little time to immerse myself in their fantastic adventures, or even read them all cover-to-cover as I once had every cherished D&D release. At some point, I expect, I’ll slip one off the shelf and spend a much-needed afternoon returning to the D&D of my youth; an idyllic time when all the cares in the world could fade away in the face of a fantastic roleplaying adventure.