The Inspiration of Books

“Books are key to understanding the world and participating in a democratic society.” 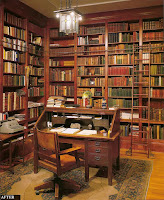 Over the years I’ve found inspiration in many places – films, television, music, historical sites, museums – but perhaps nowhere more than in books. They have fueled my endeavors in writing, game playing, and game design, explorations of various historical periods, and, of course, further reading across numerous subjects and genres that engaged my imagination. They have helped expand my horizons through non-fiction, escape this world and explore others through fiction, and play within the realms of roleplaying games. I have always been surrounded by books. No doubt I inherited these tendencies in part from a family that encourages learning (including several who were teachers) and respects the value of books. Books have helped enrich my life and, I’d hope, encouraged me to help enrich the live of others in some small way.

I like to think a story about my grandparents – learned after their departure from this earth, but relevant in retrospect – helps demonstrate the importance of books in my family. In 1939 they considered returning to the country of their birth, having lived and worked in America since the mid-late 1920s.* They were tired of their jobs, longed to be around relatives and old friends, and were seeking different opportunities. They made arrangements to move their lives: obtained necessary documents, bought steamship tickets, and hired a company to pack up their apartment and ship their belongings. Among the papers they left for us to find years later was a letter correcting the typed shipping manifest of their belongings (in both English and German) and making an additional request:

While I am sure 250 volumes was a lot in those days, especially for a young immigrant family, I sometimes gaze at my shelves of books alone (not including games or game books), estimate how many shelves 250 books occupy, and marvel at how extremely fortunate I am to have such a vast diversity of knowledge and enjoyable reading within reach. (As an academic enterprise I ran the numbers through an inflation calculator, equating books to dollars: 250 books in 1939 is almost 5,000 books today....)

Growing up we had a few bookshelves around the house filled with tomes for reference, entertainment, and inspiration. The 1960s furniture in the living room (still there) included in the upper half of one unit a sturdy bookshelf: it contained core “coffee table” books, many National Geographic titles of the time, Life’s Picture History of World War II, and a three-volume dictionary set, plus the supplemental biographic and geographic dictionaries. As young kids we had to ask permission to look at these books, approval often granted with the admonition to wash our hands first. We always received books as gifts for our birthdays or the yuletide holidays. Some of my earliest memories include the sturdy wooden bookshelf in my bedroom. Even today it stands in my office all these years later, packed with books I still feel have importance: literary titles from college, Arthurian and medieval legends, various non-fiction subjects and historic periods in which I’ve dabbled over the years. At some point, probably late in elementary school, I got a solid desk and chair, a stereo set in a cabinet, and bracketed bookshelves my dad installed along one entire wall surrounding the desk. During my school years these shelves held an increasingly personalized collection of books, especially my growing collection of science fiction and fantasy paperbacks in which I immersed myself the summer before my senior year in high school. (My roleplaying game books occupied a closet shelf, but later emerged to live in a few upright boxes atop my dresser). My library followed me – with a great deal of effort and sets of sturdy boxes – through the numerous moves typical for people of my generation as they sought steady work where it could be found, a comfort in strange places and inspiration for freelance work and creative projects.

My library has grown over the years as my interests evolved. Certainly I have occasionally culled books from this collection – ones that no longer seemed relevant or useful – trading them in at a regional used bookstore for credit to, not surprisingly, buy more books. Used bookstores served me well in expanding my library, but I’m keen to acquire interesting tomes from any source: brick-and-mortar bookstores, online retailers, flea markets, even the remaindered book warehouse of E.R. Hamilton, an affordable source especially during my frugal “Desperate Freelance Years.”

My interests have ranged across various non-fiction subjects, with shelf sections dedicated to core general reference works, ancient history, the history of Egypt (both ancient and Victorian), British colonial wars, World War II (including specialized sections on espionage, first-hand accounts, the Battle of Britain, and u-boats), Islamic art and culture, history of games, and shelves about early American history (the French and Indian War, Revolutionary War, and local history of my hometown in Connecticut) and the American Civil War. My fiction shelves have diminished over the years as my tastes changed. In high school I voraciously read fantasy and science fiction; some I’ve kept over the years and expanded (Tolkein, Eddings, Niven) with others traded in at used bookstores after attempts at re-reading them (Douglas Adams, whose material I loved in my younger years, proved less entertaining later in life). For a while historical fiction and mysteries enthralled me. Like the other genre fiction some lost their appeal over the years while others I kept to re-read when I needed satisfying diversions, Elizabeth Peters’ Amelia Peabody mysteries and W.E.B. Griffin’s OSS novels in particular.

I have a single box of comic books I liked at various points in my past life (primarily Conan and Red Sonja, and Star Wars comics old and more recent) and a smattering of graphic novels. Certainly other media influenced my life – how can I not mention movies, especially the original Star Wars film trilogy – but even those were further supplemented by books: novelizations, comic books, “art of” books, and the host of licensed novels that in great part served to resurrect Star Wars from the relative obscurity in which it languished in the mid-late 1980s. I still have many of the hardcover and paperback Star Wars novels I most enjoyed, along with a host of reference material on the films and other Lucasfilm endeavors: “art of” books, some scripts, a few coffee table books about George Lucas (before the prequels) and Industrial Light and Magic.

All of this isn’t even taking into account shelves packed with board, war, and roleplaying games.

I suppose this materialistic obsession with books marks me as an artifact of an earlier time, before electronic books allowed people to carry entire libraries in their laptops, tablets, and phones (or download it from some online cloud where titles might mysteriously evaporate). When I ultimately meet my doom anything left will probably end up at a used bookstore or flea market. So be it. They will have served their purpose in enhancing my time on earth and, hopefully, inspiring a few more meaningful contributions to roleplaying games and other literary pursuits.

* My grandparents ultimately did not return to the country of their birth at the end of August, 1939, when they had planned...a bit of fortuitous luck for which their descendants are humbly grateful.

On the Relative Permanence of Books

“A room without books is like a body without a soul.”

In this era of copious yet ephemeral internet content I find the relative permanence of books comforting. In a time of “Where did I see that?” “Who said that on their blog/podcast/video?” and “Did I bookmark that significant article I wanted to remember/reference?” the physical presence of familiar volumes on the shelf reassures me the resources I need remain near at hand.

Certainly they don’t last forever. Although they’re subject to the rare catastrophic physical calamity (flood, storm, and fire come to mind), they can’t simply be wiped away by an accidental deletion, misplaced in the labyrinthine folders-within-folders of a hard drive, lost to a malfunctioning electronic memory device, or revoked by a service that suddenly limits online access to a title. Their physical form encourages browsing, referencing relevant information from contents and indices, and quickly flipping from one section to another without the frustration of interfacing with a sometimes non-intuitive electronic device.

It is perhaps sad evidence of my age and obstinate personality that I have little patience or ability to read and thoroughly comprehend electronic books (though occasionally I’ll do so for a brief article...and even then, if significant, I’ll print it out and put it in an appropriately themed binder for future reference).

Books also inspire trust. I’m reassured knowing to bring them to publication someone – often an entire company of people – thought highly enough of their content to take time and effort to evaluate and help clarify and present their ideas, proofread them, and invest money to produce a solid physical book. (I’ll admit, however, a few sub-par volumes still slip through the system.) They’re still far more reliable than the daily cacophonous flood of internet voices in websites, blogs, podcasts, and videos from sources ranging from certifiably authoritative to the patently false or misleading (and skewed in quantity, regrettably, toward the latter). I certainly don’t claim all internet content has value, but that one must search a great deal and evaluate mountains of mateiral to find accurate, quality, useful reading. The internet offers a quick reference resource from a few trusted websites; goodness knows I’ve looked up more words in online dictionaries than the few dusty lexicons on my shelves. Internet publishing has enabled many people – myself included – to share their material with a larger audience. But in the end, such gems as I find online as PDFs, and even my own work, eventually find new life in a print copy, to sit dutifully on the shelves awaiting that imaginative impulse that inspires me to reach for them.

“Books are the carriers of civilization. Without books, history is silent, literature dumb, science crippled, thought and speculation at a standstill.”