A Confluence of Solo Games 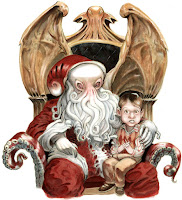 The yuletide season brought a confluence of solo games by means of holiday gifts, personal purchases, and sheer happy coincidences. My parents got me Ravensburger’s Alien: Fate of the Nostromo board game (for solo or cooperative play). As a holiday treat I bought two “bookgames” from Worthington Games, Waterloo Solitaire and Bismarck Solitaire, two releases with interesting origins in the pandemic privations. By sheer happenstance two Kickstarter games arrived just before the yuletide season got underway: Scott Almes’s Unsurmountable solo card game and Grant and Mike Wylie’s Tarawa 1943, also from Worthington Games. All these combined in this cautious, eternal season of the covid pandemic to provide some much-needed gaming diversions.

One might think the holidays would offer opportunities for plenty of family gaming, given time off from work and school and the general lack of activities we normally enjoy when we’re not in a pandemic. Yet my spouse embarked on a household project requiring a great deal of assistance and my son was inexorably drawn into his Roblox worlds. Along with all the usual yuletide expectations, duties, and celebrations we had little opportunity to indulge in family games (with the exception of trying Calico, a cat-themed game my son got). So I set off to enjoy some of my newly acquired titles, most of which incorporating solitaire designs. 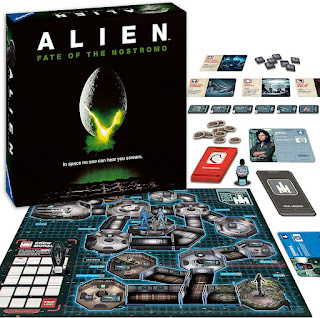 Alien: Fate of the Nostromo provided a good start. Designed for cooperative group or solitaire play, it challenges the crew of the Nostromo to complete several objectives while avoiding and fending off the xenomorph from the eponymous movie. Each character board indicates a special ability along with spaces for three pieces of equipment and a coolant canister. Players draw one mission card for each participant plus one extra; most missions consist of gathering equipment in a particular location. Once players complete all the missions they reveal a final mission. The alien, of course, hunts them down, sometimes appearing suddenly if a player reveals the alien on a concealment marker when they enter a location. Nobody dies (unlike the film), but players try to avoid losing morale from encountering the alien face-to-face; when it reaches zero, they lose. I thoroughly enjoyed the game and hope we can play it cooperatively as a family soon. I played once as Captain Dallas and again as Parker (Ripley was tempting, but her special ability relies on having another player in the game). Aside from moving the alien a few locations every turn, the uncertainty of the concealment markers added some suspense to the game. The final mission – unrevealed until players complete all others – also turned the game on its head, sometimes sending me back the way I came, requiring equipment I didn’t have, or putting me in the path of the alien. Both times I won without much loss of morale, but much of that was sheer luck with non-alien concealment markers and objectives with convenient requirements. Options exist to add Science Officer Ash for a more challenging game. 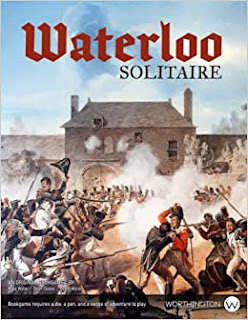 I’ve indulged in Worthington Games during the pandemic, so I thought it appropriate to try Waterloo Solitaire and Bismarck Solitaire, given their origins in the resulting shortages. Worthington explained these “book games” came about thanks to the supply shortages and shipping delays the pandemic caused; rather than wait until it was possible to produce traditional analog games with boxes, boards, and pieces, the company adapted some game designs to a solo book format using order menus, random tables for enemy moves, and multiple maps on which to mark casualties and reinforcements. Having recently watched the 1970 film Waterloo and played Worthington’s Napoleon Returns 1815 with my son, I thought I’d start with Waterloo Solitaire. The book consists of a few pages of rules, some examples of play, and then 12 spreads containing tables and rules reminders and a full-page map of the battlefield where one marks unit orders as well as losses and reinforcements for both sides. The player re-fights Waterloo six times as Napoleon and six as Wellington, with subsequent engagements increasing in difficulty. The player chooses an order for a unit from a menu (with units capable of attack only a few times during the entire game), then randomly determines the enemy’s action, then carries out their own order. A single die roll on an “Attack Results Table” determines losses among opposing and/or friendly units, occasionally modified with bonuses and penalties related to the current situation. I played three games as Napoleon and won once. While not a fan of a single die roll determining one’s fate, the variety of choice in orders – which units to use for attack, which to reinforce, which to combine in attacks for bonuses – along with the range of possible enemy strategies made for some suspenseful games with uncertain outcomes until the last two turns. I had fun pursuing different strategies despite the Wellington “bot’s” attempts to disrupt my plans. By necessity both “book games” have full color pages, increasing the price beyond what some might pay for a disposable gamebook in which one indelibly writes the results of each turn. I still haven’t tried Bismarck Solitaire, but after my experience with Waterloo Solitaire I’m looking forward to it. I’m also interested to see if, in the non-covid future, Worthington produces full board game versions of these titles with rules for solitaire and head-to-head play. 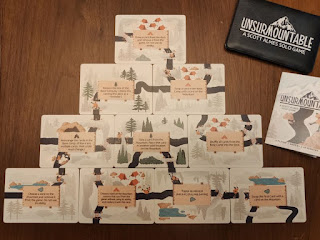 In Unsurmountable the player builds a mountain out of 10 cards in four tiers, trying to line up pathways on each card to go from bottom to the top. A five-card “base camp” provides resources: each turn the player can place the left-most card or use the special ability on any of the other four cards. These limitations really challenge the player when building the mountain and setting pathways to the top. Five options offer more restrictive rules for a greater challenge, most based on illustrations and iconography adorning each card’s playful artwork by Christy Johnson. The base game uses only 17 cards, though two variants add cards and objectives. The game comes in a compact, card-sized “wallet” with two pockets, enough to hold all the cards (including the expansions) and the rules. Out of three plays I won twice, though not without a good deal of contemplation on how best to chart my path up the mountain. The small size and puzzle-like gameplay appealed to me; the variants and expansions provide plenty of challenge replay potential. 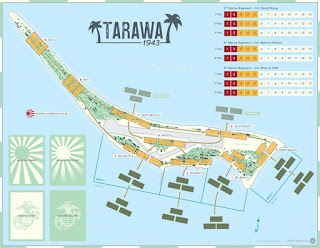 Worthington Games publishes some good traditional wargames (many of which go out of print way too soon), including a host of soliatire games. I’d previously played Worthington’s Hidden Strike: American Revolution (solitaire and coop), but after 20 games only came close to winning twice. But I took a chance with Tarawa 1943 given the different rules approach the Wylies took. The game uses a board, blocks, cards, and dice to simulate the U.S. Marine assault on Betio atoll in its island-hopping campaign across the Pacific Ocean in World War II. The player can take one action with one regiment each turn, with combat resolved with a system of die rolls, keeping and re-rolling some dice to gain results to wear away the Japanese defenders. Cards offer advantages to the Marines and determine Japanese actions in defense: fire attacks, Banzai! charges, infiltration, and other methods of lowering the cohesion for the Marine units. (I discussed the game’s mechanics and the battle itself more in “Why We Wargame.”) Out of three games I lost two (including one lost by one Victory Point) and won a single game. Though each had its frustrating moments, gameplay imparted a sense of the massive resistance the Marines had to overcome. I was particularly impressed by the historical perspective the game offered. Most cards for each side included historical notes; even specific rules explained the history behind them. Along with the rulebook, a second booklet provided specific clarifications for cards along with historical essays on the battle. Everything uses archival photographs or sketches by Marine Corps artists on the scene. Tarawa 1943 is a great-looking game that presents the player with some tough choices in a battle the Marines called “Bloody Tarawa.”

Although I’ll see if we can once again restart family game nights on Thursdays and occasionally interest my son in some historically inspired games on weekends, I’ll still continue to indulge in these solo games along with other tried-and-true titles already in my collection...and search for new ones that combine solitaire play with engaging themes and intuitive mechanics.

“One can be instructed in society, one is inspired only in solitude.”