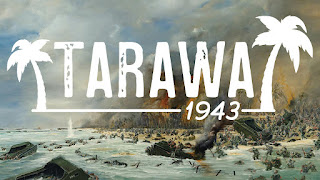 This week Worthington Publishing is wrapping up a Kickstarter campaign to fund its latest game, Tarawa 1943, a solitaire wargame of the US Marine Corps invasion of that Pacific island during World War II. Although I’m not a huge fan of the war in the Pacific, I was tempted by several factors: it offers me a chance to explore an aspect of WWII I’ve not dabbled in before; Worthington games have high production values; and I enjoy solitaire games. It brings to mind the numerous reasons why I – and presumably others – play historical wargames. These games also remind me of the turbulent times in human history when ordinary people were called (voluntarily or otherwise) to make courageous sacrifices. Worthington Publishing is funding Tarawa 1943 on Kickstarter until Feb. 6 at 4 p.m. Eastern Standard Time (and probably on pre-order at the company website after that like many of its past Kickstarter titles). I’ll admit having binged on Worthington games during America’s hellscape response to the pandemic with money saved from not going out and by spending a little of my covid-19 relief checks from the government (though we also donated to local charities to help those in our community who are less fortunate in these difficult times). I’ve bought a few titles in recent years, notably Bill Molyneaux’s excellent Wilderness Empires (covering the French Indian War) and Hold the Line battle games for the American War of Independence and French Indian War. Between holiday sales and a pre-order I added a few more to my collection in 2020, mostly related to the WWII battles that interest me. I primarily play these solitaire, though my son’s joined me for some Hold the Line American Revolution scenarios. Many use blocks to simulate the fog of war between players, which also helps add some uncertainty in solitaire play, especially as I’m bad at remembering the position of enemy units engaged in past turns. The blocks are also far easier to handle than half-inch cardboard chits and work well when turning them onto a new side to show their weakened conditions from combat. Worthington games usually include a comfortable number of blocks: not too many to keep track of and complicate play, but not so few it impacts gameplay or the historical feel. The games have high-quality components: painted wooden blocks, coated stickers, good dice, nicely mounted boards, sturdy boxes, full-color rulebooks, and sometimes decks of cards. Given these production values it’s no surprise most of these games cost around $60-75, though I took advantage of a few sales and got several titles I really wanted at great discounts. 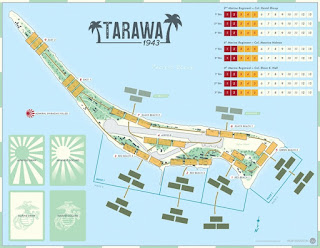 Tarawa 1943 isn’t the usual block wargame, though it uses colored blocks to note troop positions and conditions. The game features a great map of the atoll with spaces marked for starting troop positions and arrows indicating routes of movement and attack. Several tracks note marine units’ “cohesion,” an indication of their fighting strength, willpower, and coordination; it decreases by taking action or fire, though in some cases it can make up for earlier losses. A card deck determines Japanese actions each turn (varying forms of attack) while a Marine Corps deck offers the player some options in bolstering attacks and countering Japanese moves. Dice pools resolve attacks from each side, with results depending on combat conditions; assaults can cause a reduction in marine cohesion or elimination of a marker on either side, with some results further modifying die rolls. The Kickstarter page offers a deeper look at the game than I can provide here: a draft of the rulebook, images of the board and cards, the component list, and several videos covering play procedures.

When I saw Worthington running a Kickstarter for Tarawa 1943 I was undecided. Another company was Kickstarting a new edition of a block wargame for another WWII theater I like, but I wanted to limit myself to one of the games. After a few moments’ thought, Tarawa 1943 won out for several reasons. It was slightly less expensive. It was a purely solitaire game. The game mechanics seemed less like a traditional chit-and-board wargame (though I still like those). And it covered a particular battle in a theater I’m still exploring. I’ve done a little gaming focused on the Pacific Theater. I’ve run some kid-friendly Wings of Glory scenarios (most notably my “Game which Will Live in Infamy”). I’m prepping models for both Warlord Games’ Cruel Seas and Bob Cordery’s Gridded Naval Wargames scenarios set in the Pacific. I own a few games covering the entire Pacific theater of operations (including Axis & Allies Pacific, Columbia Games’ Pacific Victory, and Worthington Publishing’s own Holdfast: Pacific). But I don’t really have many games about Marine Corps action in the island-hopping campaign; certainly no solitaire games (though I’m aware of Decision Games’ solo mini-folio game Merrill’s Marauders). 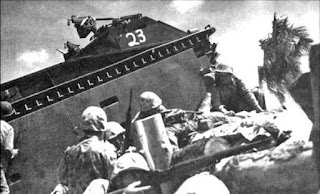 The battle for Tarawa has great historical significance in the context of the WWII island-hopping campaign in the Pacific. It was the first contested amphibious landing by the US Marine Corps, an operation which, had it failed, would have called into question America’s entire strategy in the Pacific. During 76 hours of fierce fighting the marines took the island, capturing only 17 of its defensive force of more than 3,600 Japanese soldiers; only 129 of the 1,200 Korean laborers who built the island’s defenses survived. Of the 12,000 members of the 2nd Marine Division storming Tarawa’s beaches, more than 2,100 were wounded and more than 900 died. It was the subject of With the Marines at Tarawa, a short documentary film released in 1944. With presidential approval it was the first film to show graphic scenes of combat and American war dead on the big screen, no doubt a shock to viewers at the time and representative of the price extraordinary citizen-soldiers paid to preserve freedom in the world.

I remember mentioning to a non-gamer once that I played wargames and recall their outraged response that “I’d never play a game about war!” Why would anyone want to make a game out of what became known as Bloody Tarawa? Sentiments like these led me to explore these issues at Hobby Games Recce in such past missives as “Why Play Wargames?” and “‘Daddy, Who Are the Bad Guys?’” They’re particularly delicate when introducing wargames to kids, who can’t always appreciate the various facets of such issues. Historical conflicts remain the foundation of wargames, both those on boards and with miniatures. They provide the thematic context for games offering an engaging experience, just like board, card, and roleplaying games...or even television and films. Those formats also cover difficult and sometimes even controversial subjects. That the wargame experience is grounded in history further engages players’ own interests in various periods and conflicts. They give us a small glimpse into the daunting challenges front-line soldiers faced in wartime. They help us remember the sacrifices made by those who died and those who survived to live with the horrors they witnessed the rest of their lives. 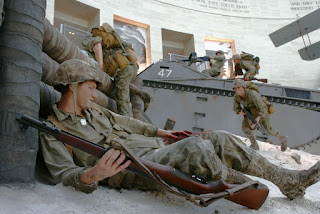 Games on their own can help broaden our experience in how we relate to their historical subjects...but they can also inspire us to explore history. Tarawa 1943 – and reading about the battle online – reminded me of the National Museum of the Marine Corps in Quantico, VA, which made a huge impression on me on past visits. Although closed now for the pandemic, the museum had been an occasional day-trip destination in years past. Exhibits cover every era of the US Marine Corps with authentic artifacts and a chance to experience several “immersive” exhibits: watch marines storm a dug-in German position at Belleau Wood in the Great War; endure cold temperatures with marines under fire at Chosin Reservoir in the Korean War; disembark from a helicopter supplying Hill 881 South near Khe Sanh. Those interested in US Marine Corps operations in WWII can walk behind a Sherman tank supporting an infantry assault of a Japanese position. They can get an up-close view of an LVT-1 amphibious tractor crashing over a palm log defensive wall on Tarawa. They can see the original flag raised over Iwo Jima. These and other exhibits help visitors imagine what it might have been like for marines in combat. Places like the National Museum of the Marine Corps and games like Tarawa 1943 put us in their shoes for a short while, to experience a small, abstracted sample of their time on the battlefield; so ultimately we may appreciate our own cozy existence – purchased at their expense – all the more.

“I tell the President the truth. Our soldiers on the front want people back home to know that they don’t knock the hell out of them every day of every battle. They want people to understand that war is a horrible, nasty business, and to say otherwise is to do a disservice to those who died.”