How Dino Hunt Dice Saved Me from Zombies

A few weeks ago, as we prepared to have some friends over for food and casual gaming, I had a small selection of appropriate games out on the coffee table, including Tsuro, Forbidden Island, and Zombie Dice (three I’ve recommended before as “innovative party games” suitable for people who aren’t hard-core gamers). Unfortunately the Zombie Dice somehow came out of the canister, toddler started rolling them, and stupid Daddy explained what each symbol was: brains, footprints, and shotgun blast. Our toddler’s at an age where he picks things up like a sponge, recapping what he sees on his PBS Kids television programs, fixating on toys or games he finds in my office, talking about excursions in great detail days later, repeating words and phrases he hears from others (usually the ones we don’t want him to repeat...). Of course, of all the Zombie Dice symbols, the one that elicited a delighted-toddler scream each time it came  up was “shotgun blast!” This did not delight Mommy, and Daddy instantly felt like he was (quite deservedly) in the doghouse.

On a subsequent visit to my friendly local game store I happened to spot Steve Jackson Games’ Dino Hunt Dice hanging on a display near Zombie Dice and other dicey versions of board games. I hesitated. The dice displayed looked cool, with prehistoric leaves, three different dinos (apatosaurus, triceratops, and tyrannosaurus rex, of course), and three corresponding “stomp” footprints. I already owned Zombie Dice and the sales blurb on the Dino Hunt Dice packaging showed it was exactly the same gameplay but with dinosaurs. Then I realized what I just thought, that phrase that meant the game wasn’t really for me, but for my toddler: “with dinosaurs!” 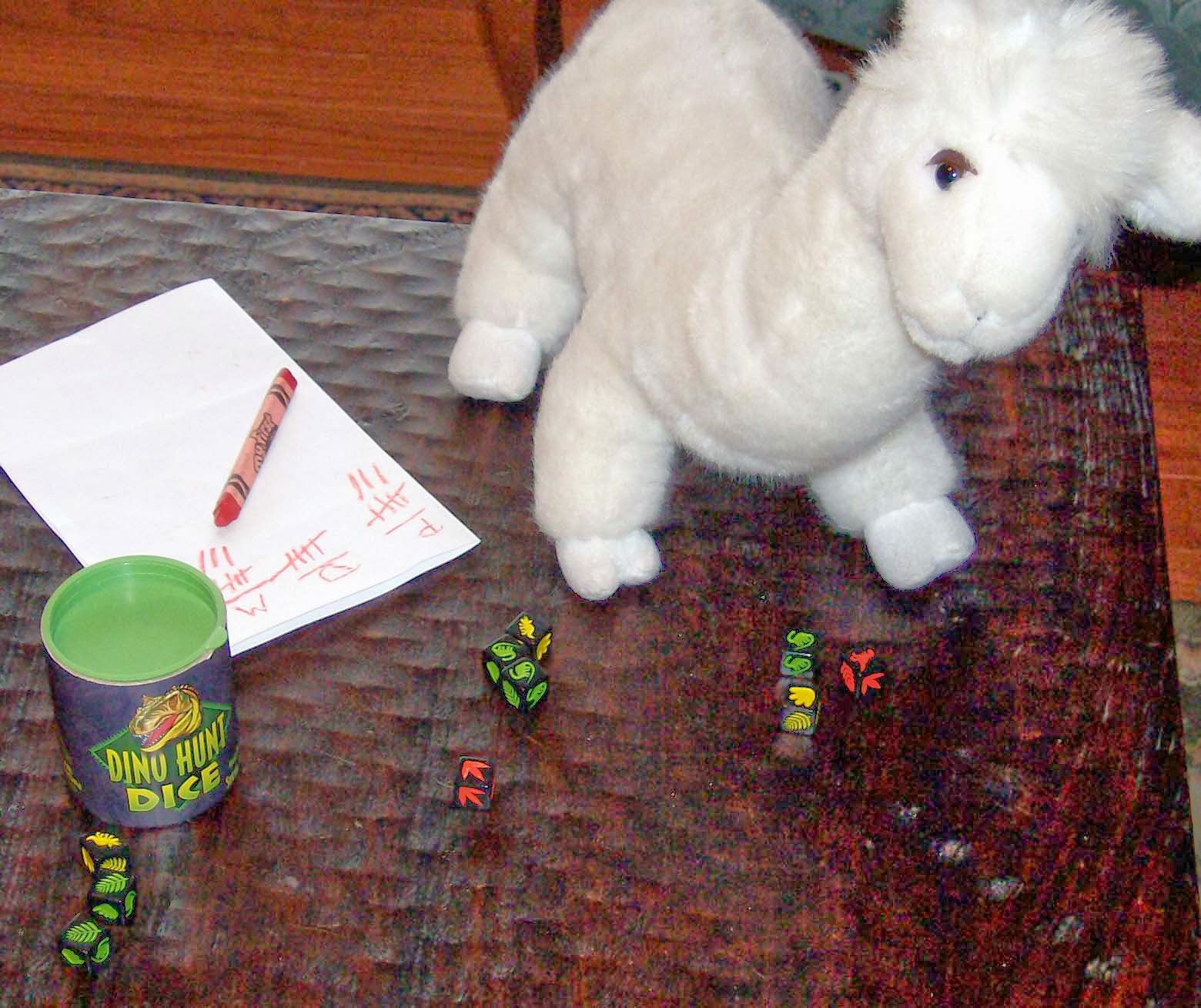 The $9.99 price point was a no brainer for a simple dice game featuring dinosaurs for my toddler; but the friendly local game store’s seemingly endless 20% off all board games sale lowered the price and made me an extremely happy customer. I brought the game home and reveled in my toddler’s glee when he realized Daddy found and purchased a dinosaur game just for him. We gathered around the coffee table to read over the rules, grabbed a piece of scrap paper and a crayon for scorekeeping, and started playing. Our toddler wasn’t satisfied with having just Mommy and Daddy for fellow players; he felt the need to fetch his plush buddy Alpaca and include him in the game as well (and thus taking an additional turn himself rolling for his cuddly buddy). We made one modification to the rules for toddler play: instead of capturing 20 dinosaurs to win, we reduced the victory conditions to 10 to allow for the slower pace of a game with someone still learning to count and take turns (both on his and Alpaca’s turns).

Overall everyone enjoyed the game. Mommy and Daddy had fun with the push-your-luck mechanic, while the toddler focused more on his turn-taking and counting skills. He quickly grasped the concepts behind each image turning up on the dice: with our encouragement he didn’t realize the “stomp” result meant one of his dino hunters got crushed, more that the dinosaur “ran away” for good instead of hiding in the lush underbrush of the “leaf” result. Besides, a toddler shouting “stomp!” doesn’t raise disapproving eyebrows as much as shouting “shotgun blast!”

I vaguely recall playing a demo version of the original Dino Hunt game years ago at GenCon or the GAMA Trade Show when I was more active in the industry as an editor at West End Games (I’d like to say I still have the demo giveaway materials stashed somewhere…). According to the company website the original game and its supplements remain out of print; while that game had good dino-themed play value (by my foggy recollection), Dino Hunt Dice distills the essence of the original game into a quick, push-your-luck game experience suitable for supervised play with three year-olds. I recommend “supervised play” for two reasons: the game warning indicates that, since it contains small parts (dice), it isn’t intended for kids ages 0-3; even a bright three year-old isn’t going to get much play value out of it other than rolling colorful dice and identifying the symbols.

We enjoyed our actual play experience. It allowed our toddler to play one of Daddy’s games; gave him a chance to handle and roll the dice; and provided us an opportunity to practice counting dice, identifying results, and taking turns. After all that dice rolling, result counting, and dino captures, who ultimately won? Why, Alpaca, of course!

Comments....
Want to offer feedback? Start a civilized discussion? Share a link to this blog entry on Google+ and tag me (+Peter Schweighofer) to comment.
at 9:45 PM