One Year Later: Reading The Hobbit at Bedtime

Last year around this time I began reading The Hobbit to my then two year-old son as part of his bedtime reading routine. Mommy reads a few short children’s books while he sits in bed, then he puts his head on the pillow, cuddles with some of his plush buddies, and (sometimes reluctantly) closes his eyes to listen. The ritual usually includes him asking to see one of the fantastic Alan Lee paintings in my wonderful illustrated edition of the book. 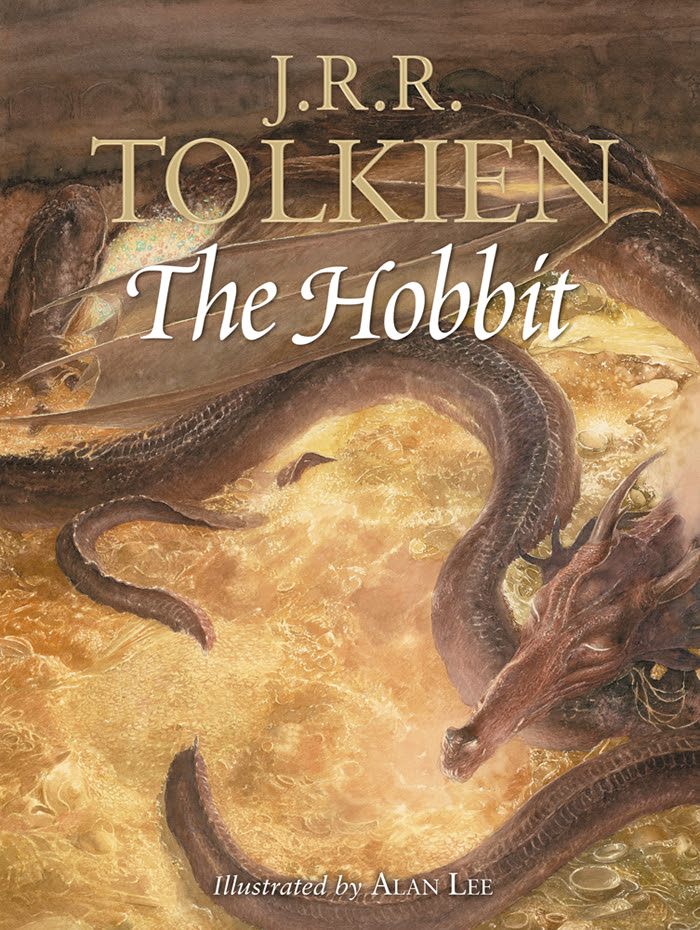 Since starting this tradition in April 2012 we have read it four times through, and now we’re well into a fifth reading. I tried reading several other books that might lull him to sleep, including undiluted Grimm’s Fairy Tales (in which truly horrid things happen, especially to kids), but they didn’t possess the wondrous enchantment of The Hobbit or Tolkien’s melodious, often rambling writing style. Though I might try some children’s versions of Greek mythology or Aesop’s fables next time around, there’s something about Daddy reading The Hobbit that appeals to both of us. The fact that it’s viewed as Daddy’s special book to read feeds my inner geek dad; I certainly find satisfaction that it may be the first of many shared geeky interests to come.

During the course of our one-year, four-reading journey through The Hobbit I’ve gained a greater understanding of the literature and myself. Gandalf’s sometimes doddering, sometimes gentle authoritarian manner has grown on me, and I find comfort in it that Bilbo and the dwarves must have felt in his presence. I don’t much care for the Mirkwood passage, possibly feeling the dwarves’ tedium at the dark, airless atmosphere and the revulsion at the spiders and their wicked intentions. Smaug remains brilliantly evil, a true scenery-chewer, and insidious in his efforts to turn Bilbo against the dwarves by playing on greedy stereotypes. Throughout the book I more thoroughly enjoy Tolkien’s often rambling, conversational storytelling style, something I’m ruefully noticing has always crept into my own writing style since I first read the book as a boy.

Part of the fun comes from “performing” the reading. Though I don’t have individual voices for all 13 dwarves, I have voices for key characters: Bilbo’s higher, sing-song voice; Gandalf’s melodious bass and casual tempo; Thorin’s almost monotone, gruff bass; Bard’s grim baritone; Smaug’s snake-like, almost sneering voice. Gollum, of course, follows the patterns voiced by Andy Serkis in the Lord of the Rings films, at least when I’m in the mood. I’ve also learned to vary my tone and inflection to represent other character voices, such as the Elvenking’s high nasal condescending tone. Since it’s bedtime reading, I start at a fairly casual pace and take my time, lowering my voice -- sometimes even to a whisper -- should the reading go longer than 10 minutes or so, to further induce sleep from a sometimes fidgety toddler.

I did not take my toddler to see Peter Jackson’s The Hobbit: An Unexpected Journey, though I saw it twice in theaters and enjoyed it immensely as something quite different from the book. (My son might see the films when he’s old enough, though if I ever find a working VCR in the house, or find it on DVD, the Rankin/Bass animated version might be more his speed.) Despite the movie’s departure from the literature on various levels, the soundtrack captured much of the magic and mystery of Middle-earth, particularly the dwarves’ Misty Mountains song, the tune of which I’ve memorized and now sing softly when encountering the lyrics while reading The Hobbit at bedtime. In reading the book aloud I’ve found the songs remain the most difficult to parse from the printed text to spoken voice; I wish the film offered tunes for the other major verses in the novel, particularly the songs of the Rivendell elves and the goblin chants (“Down to Goblintown” and “Fifteen Birds in Five Fir Trees”).

Has reading The Hobbit kindled any interest in related geek activities for my toddler son? That’s not easy to discern. He knows Gandalf is a wizard, Smaug is a dragon, and Bilbo is a hobbit. He likes the immense, plush red dragon hanging from the ceiling of the local library’s children’s section. I’ve brought him to the friendly local game store enough times that he’s declared he wants to play games with Daddy, and we’ve engaged in some very simple games (such as a Dinosaur Train-themed chutes and ladders reskin and Steve Jackson Games’ Dino Hunt Dice…more on that in a later post); but, as I patiently explain to him, he needs to master the skills of counting and taking turns before he tries anything but the simplest of games (and he’s working on those with adequate progress).

But I see all that as part of his broad introduction to the host of subjects that interest most kids, among them dinosaurs, wild animals, aircraft, and trains (the last two being interests of his father and a pilot uncle). Bedtime reading remains only a small portion of his day filled with way too much PBS Kids television programming, library story times, programs at the local history museum, trips to the park and playground, and more toys, Hot Wheels cars, blocks, and Legos than I care to clean up….

Comments....
Want to offer feedback? Start a civilized discussion? Share a link to this blog entry on Google+ and tag me (+Peter Schweighofer) to comment.
at 9:54 PM