After posting a rambling missive on two 20 year-old tomes about gaming – wherein I mentioned maintaining and building a small collection of non-fiction books about gaming – I thought I should offer a brief yet annotated catalog of titles in that collection, along with a few items on my “wish list” I hope to acquire. The list is far from complete or truly “academic.” It ambles around various styles and subjects according to my interest. Most remain far from a seriously scholarly bent. 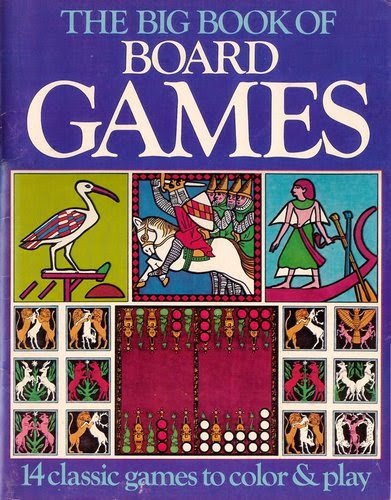 As always, I welcome civilized discussion of this subject, particularly suggestions of interesting titles I’ve overlooked. Here are some of the “academic” works on my shelf, starting with the two featured in the previous blog post:

Heroic Worlds, by Lawrence Schick (Prometheus Books, 1991). As I mentioned in a previous feature, this book offers an interesting view into the state of the roleplaying game industry in 1990. Schick’s observations about game genres and individual game products remain invaluable to understanding and collecting materials of that period. The contributions from industry luminaries remain extremely enlightening even today.

The Complete Wargames Handbook: How to Play, Design & Find Them, by James F. Dunnigan (Quill 1992). Drawing on the author’s involvement as founder of Simulations Publications Inc. (SPI), publisher of Strategy & Tactics magazine, and work as a prolific writer and game designer, this volume covers a host of wargame-relevant topics for both traditional board-and-chit wargames as well as their electronic interpretations. Lots of little gems in here, from the progression from history to game for a sample wargame to a brief history of the wargaming hobby.

Play: How It Shapes the Brain, Opens the Imagination, and Invigorates the Soul, by Stuart Brown (Penguin Group, 2009). Based on a TED talk Brown gave, Play provides a host of scientific observations on the beneficial power of play to develop intelligence and social integration. Watching the TED video covers most of the salient points, but I’m a fellow who likes to have his references in analog format rather than digital. The book offers far more in-depth material in an extremely readable style. 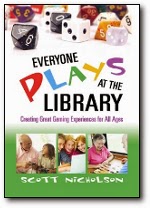 Everyone Plays at the Library: Creating Great Gaming Experiences for All Ages, by Scott Nicholson (Information Today, Inc., 2010). I’m a fan of Professor Nicholson’s work to broaden people’s perceptions of games from an academic point of view (and I’ve discussed his book on the Hobby Games Recce blog before). As the culmination of years of research, game labs, and an online course, Professor Nicholson’s book offers a framework for evaluating and discussing games in a social context to help determine what kinds of games are idea for different kinds of audiences and venues. It imparts a better sense of matching particular kinds of games to players and play spaces to create the best game experiences possible. Don’t let the title fool you; the book remains an essential reference for anyone seeking to introduce games to others, whether in the comfort of your own home, the Friendly Local Game Store, conventions, and local libraries, schools, and museums.

Dicing with Dragons: An Introduction to Role-Playing Games, by Ian Livingstone (New American Library, 1983). Yes, the author is the Ian Livingstone involved with White Dwarf, Games Workshop, and the Fighting Fantasy solo gamebook franchise. This title remains one of the earliest efforts to cover various aspects of the roleplaying game hobby, from overviews of existing games on the market, various accessories, miniature figures and painting, and even the nascent subject of computer games. It includes a solitaire adventure in the style of the Fighting Fantasy gamebooks for more than 50 pages (essentially one-quarter of the book) to introduce concepts of creating characters and “playing” scenarios. Like Heroic Worlds, Dicing with Dragons provides an interesting historiographical picture of the roleplaying game hobby in its early years.

Historical Game References: I have a weakness for collecting books about historical games, particularly those offering rules, variations, board diagrams, and historical context. These include R.C. Bell’s Board and Table Games from Many Civilizations, H.G. Wells’ Little Wars and Floor Games, David Partlett’s Oxford History of Board Games, Jeffrey A. DeLuca’s comprehensive Medieval Games, and João Pedro Neto and Jorge Nuno Silva’s Mathematical Games, Abstract Games. Bell, Partlett, and DeLuca cover much the same ground with some variation, but remain handy references nonetheless. Mathematical Games, Abstract Games offers rules, boards, and strategies for more cerebral fare – including one of my favorites, Lines of Action – but some might find it dry reading. Wells’ two slim volumes occupy a space between my “academic” game books and several volumes on military history. I also keep The Big Book of Board Games: 14 Classic Games To Color & Play on that shelf, mostly because the oversized coloring book (with nice cardstock pages) includes both rules and playable boards.

I’m always modifying my “wish list” of non-fiction gaming books to acquire and read. I even maintain a small pile – primarily an electronic pile – of material I possess but haven’t had time to read. Greg Costikyan’s I Have No Words and I Must Design is on my “to read” list, which demonstrates how I can have a PDF on my computer but haven’t read it because I’m not used to reading lengthy material on screen. That also reminds me that I have a host of PDF articles Professor Scott Nicholson has released over the years that really deserve my closer attention (hmmm, I must start printing out academic gaming PDFs...). I regret Katie Salen and Eric Zimmerman’s game-design textbook Rules of Play: Game Design Fundamentals remains only partially read, though now and then I pick it up and browse through it for inspirational tidbits.

Now and then I stumble upon other, far more serious reading lists on actual game design, all far more scholarly than my own collection. Game industry luminary James Wallis offers his “game narrative” reading list at his blog, including links to his friends George Buckenham’s “Reading List for Game Developers” and Jurie Horneman’s “Another Reading List for Game Developers.”

Aside from tomes I already own simply waiting for my time and attention, I have a few choice non-fiction gaming books on my wish list. Jon Peterson’s Playing at the World remains high on that list as perhaps the most comprehensive modern history of the roleplaying and wargaming hobbies. I also consider Bernie Dekoven’s The Well-Played Game: A Playful Path to Wholeness an essential look at games outside of the greater adventure gaming field. Many wish list items relate to my interest in wargames, including Henry Hyde’s The Wargaming Compendium and Donald Featherstone’s War Games and Donald Featherstone’s Solo Wargames by one of the late, venerable masters of the subject.

Browsing over my Amazon wish list and its automated, subject-related recommendations I realize many other non-fiction titles about gaming exist, particularly regarding roleplaying; but my “to read” pile (including fiction, non-fiction, and actual gaming books) grows like an Ice Age glacier, so I must exercise some degree of discretion.

Comments....
Want to make some non-fiction gaming book recommendations? Offer feedback? Start a civilized discussion? Share a link to this blog entry on Google+ and tag me (+Peter Schweighofer) to comment.