Connecting with An RPG Setting

Roleplaying games present several challenges for newcomers, whether they’re new players at an experienced gamemaster’s table or enthusiasts seeking to run a particular game for others. Aside from the initial leap complete neophytes must make in understanding the roleplaying game experience, gamers must also learn a set of rules governing character abilities and actions in the game setting; though some might argue most people have at least some experience with both “roleplaying” and rules, gaining those from “let’s pretend” play activities from their childhood and game mechanic concepts drawn from more traditional family board games or sports. But not everyone has prior experiences from which to adapt to some roleplaying games’ more exotic settings. 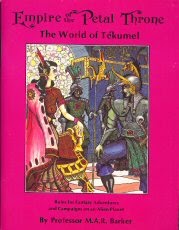 One reason Dungeons & Dragons remains so popular – aside from being the first commercially successful roleplaying game – thanks in part to its generic fantasy setting, one that relies on familiar tropes from popular media such as the Lord of the Rings films based on J.R.R. Tolkein’s Middle-earth epics; stories, comics, movies, and television shows based on Robert E. Howard’s Conan character; magical fare like the Harry Potter franchise; and many other sources such as those listed in D&D’s own infamous “Appendix N.” Warriors and wizards fighting goblins and orcs in subterranean caves and ancient ruins; these trappings hearken back even to the most basic Western cultural legends of King Arthur, Beowulf, and the tales of the Brothers Grimm. These media and cultural foundations help players easily grasp the setting concepts behind D&D than other more esoteric game worlds.

Some other games don’t suffer from player unfamiliarity with their setting. Nearly any game based on a licensed media property has a loyal fan following intimately familiar with the universe...some of those fans also share an enthusiasm for roleplaying games which they indulge in themselves and sometimes seek to share with other fans. Take your pick: Star Wars, Doctor Who, Battlestar Galactica, Firefly. In these cases gamer-fans have to overcome the challenges posed by roleplaying game rules alone instead of both mechanics and an unfamiliar setting. Not familiar with the setting? Just sit down for a few hours with a DVD set for one season and immerse yourself in the setting.

Game designers and gamemasters do their best to present roleplaying game settings in familiar terms. Sometimes they can use a “crutch” to help impart the gist of a setting by drawing comparisons to familiar films, television shows, comics, and novels. For instance, one might describe GDW’s Victorian space fantasy game Space 1889 as Zulu meets Edgar Rice Burroughs’ Barsoom novels. One could compare Vampire: The Masquerade and other World of Darkness fare to roleplaying games based on Ann Rice’s vampire novels or the Underworld film franchise.

Sometimes game settings draw comparisons to other games or established genres. At the time of its release, Fantasy Flight Games’ Dragonstar was billed as “D&D in space” (though one might argue the Spelljammer setting holds that distinction). Wicked North Games’ Westward could easily be described as Wild West steampunk on another planet. R. Talsorian’s gorgeous Castle Falkenstein used comparisons to genre films and literature plus a healthy dose of fantastic artwork to bring its Victorian steampunk fantasy alternate earth to life for gamers. Aside from its groundbreaking game mechanics, Monte Cook’s visionary Numenera game also boils down to familiar if morphed fantasy tropes merged with lost science fiction bits amid the ruins of an extremely far future, all enhanced with inspiring illustrations.

Really esoteric and original roleplaying game settings can’t often draw on widely understood cultural elements. A few titles I’d consider “esoteric” come to mind include Skyrealms of Jorune – with which I regrettably have little exposure – and anything based on M.A.R. Barker’s Empire of the Petal Throne setting, including the recently released Bethorm: Plane of Tekumel game from adventure gaming luminary illustrator Jeff Dee (a subject I’ve discussed before). Some newcomers to the roleplaying game hobby might find some of the more exotic settings mentioned in earlier paragraphs just as esoteric. (As an aside Wizards of the Coast’s Everway game from 1995 remains largely forgotten primarily because of the inaccessibility of its setting – despite some groundbreaking game mechanics elements – at a time when many fans really wanted a game set within the rich world of the company’s wildly popular Magic: The Gathering collectable card game.) Certainly most provide at least a setting framework – if not comprehensive material on locations, equipment and treasure, meta-plots, characters, and potential adventures – though this often requires considerable reading and comprehension from an often voluminous core rulebook.

Some of these game settings are so intricately and deeply designed that players really have to immerse themselves in the source material to understand how to game in that environment. Aside from reading the rulebook’s relevant setting materials (possibly including some rule sections, too), what methods do gamemasters use to acclimate players to new and obscure setting material?

Media: It’s not always possible to find a corollary between existing novels, comics, film, and telelvision shows, but this remains one of the best ways to orient newcomers to at least the spirit of an unfamiliar if not esoteric setting. Sometimes the roleplaying game itself offers supplemental material specifically tied to the esoteric game itself; for instance, The Man of Gold, M.A.R. Barker’s first novel set in the world of Tekumel. I’ve occasionally dabbled in this kind of setting orientation myself; long ago in the days when Star Wars was all but a forgotten media property (the early 1990s, before the Timothy Zahn novels appeared), before embarking on an epic Star Wars: The Roleplaying Game campaign with friends, we all spent a day watching the classic trilogy (particularly because one player had managed never to have seen the Star Wars films before...).

Internet Surfing: Wandering the seemingly infinite halls of the internet can provide newcomers to an esoteric setting with some exposure to informative elements, from professional and fan-produced artwork to sites with game- or setting-specific material, actual-play reports, and encyclopaedic wikis filled with cross-linked information. Run a Google search on “Tekumel” and one finds a host of blogs, illustrations, maps, and comprehensive websites offering lots of setting information to absorb.

Player Handouts: Gamemasters can use a variety of handouts to both inform players and put them in the mood for the game. I’ve created information handouts for a variety of games in the past, usually focusing on knowledge the average character would possess. In some cases these include outlines on how players accomplish basic tasks using the game mechanics, but often they incorporate useful setting material. I even recall compiling a list of slang terms used in early Star Wars novels for my player orientation sheet used in running Star Wars d6 adventures at conventions (apologies for referring yet again for my involvement with the Star Wars: The Roleplaying Game).

Solitaire Tutorial Adventures: Frequent readers might recall I particularly enjoy solo tutorial adventures and have frequently discussed the subject before. These brief scenarios using programmed entries (similar to pick-a-path-style books of yore) to enable readers to dive into both the game setting and mechanics right away. Granted, this often requires sharing the rulebook with players (sometimes a limited resource), but it’s a good starting point to steer newcomers for quick immersion in both the game system and setting. Even such an esoteric setting as Tekumel has used this technique; Theatre of the Mind’s edition of Adventures in Tekumel presented much of its player-oriented material and several scenario books in the form of playable solo adventures (and some with lengthy narrative portions imparting the intricacies of the setting). I’ve used them to orient myself to new settings that interested me as a gamemaster, particularly West End’s Paranoia second edition and the multi-genre TORG.

The issue really comes down to how much investment players are willing to make in learning the setting beyond the time and focus required to comprehend the essential game mechanics. Not everyone can sit down, read, and absorb a hefty rulebook, nor are they always willing to do so to fully understand every game in which they wish to dabble as players. Familiarity with the setting genre goes a long way in enticing them to play and rewarding them with an entertaining experience (instead of a game session filled with complete bafflement). Some settings seem interesting but remain so foreign – despite various strategies to inform potential players – as to remain essentially inaccessible...a regrettable condition given the number of high-quality, esoteric game settings available today.

Comments....
Want to offer feedback? Share an “esoteric” game setting you’ve encountered? Start a civilized discussion? Share a link to this blog entry on Google+ and tag me (+Peter Schweighofer) to comment.