After having discovered roleplaying games – through Dungeons & Dragons – the summer before I started high school, I quickly began exploring other games in the adventure gaming hobby (including board-and-chit wargames). I bought and devoured nearly everything TSR released at the time, dabbled in Traveller, and started gathering whatever oddities I might run across. Then I discovered the German equivalent of a fantasy roleplaying game, Das Schwarze Auge. 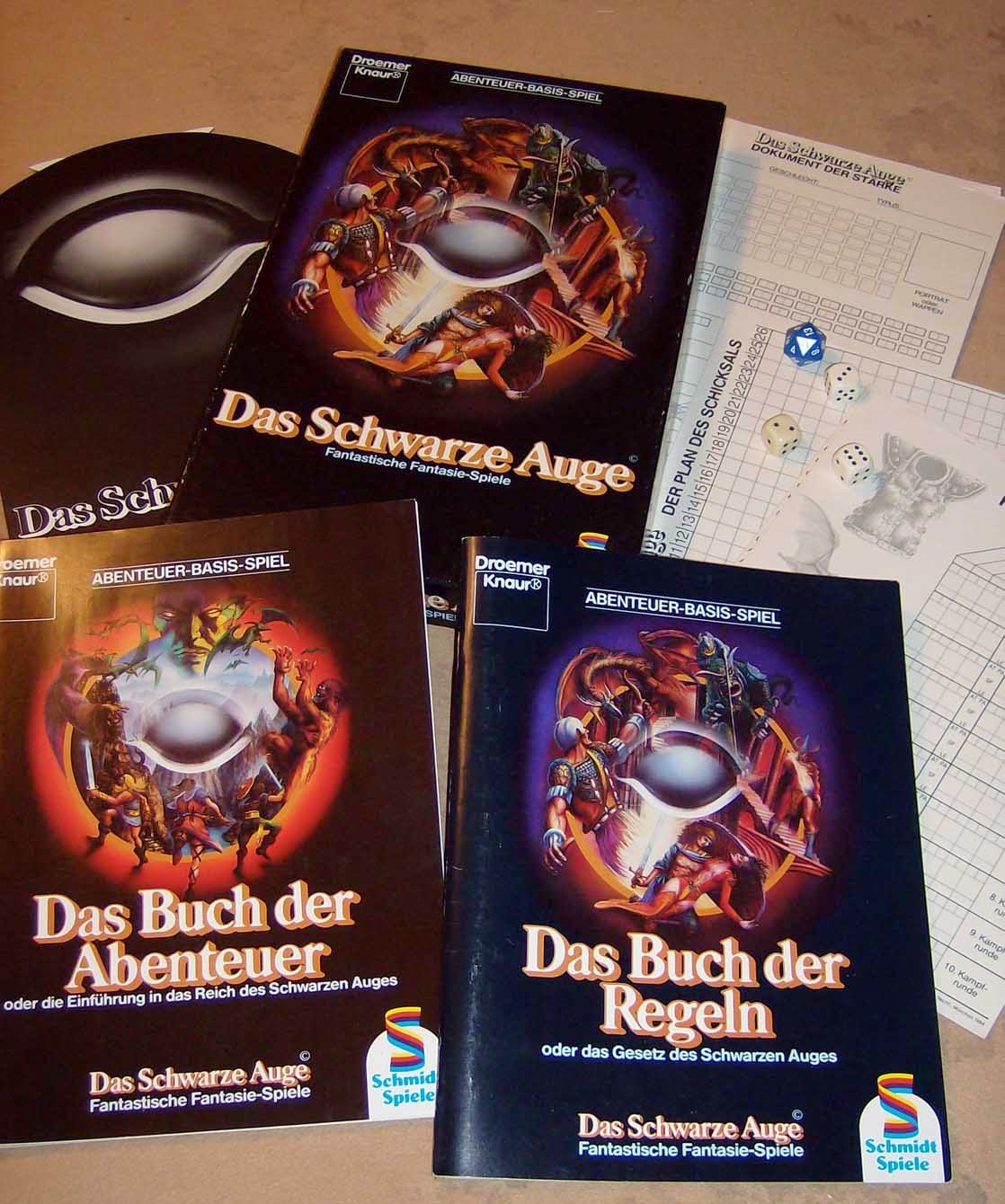 In 1984 Schmidt Spiel – a German game publisher with roots going back to the early 20th century – published an original German-language roleplaying game entitled Das Schwarze Auge (translation: The Dark Eye). It was clearly inspired by D&D; the designer, the late Ulrich Kiesow, translated both D&D and Tunnels & Trolls for the German editions. It’s rise (and fall) broadly mirrored its American cousin, with a game system that seemed basic at first, with more supplements and editions adding layers of complexity to the rules and setting, and finally becoming a huge system and continuity creature that momentarily faded when the publisher ran into financial trouble and declared bankruptcy.

Back in 1984 my family was taking a week’s vacation in Germany after a two-week youth orchestra tour of Germany, Austria, and Switzerland; my parents drove the instrument van while my brother and I played violin in the orchestra. We’d visited Germany before in 1981, an opportunity to indulge my penchant for medieval history, castles, knights, legends, and other romantic Old World interests, but I’d not yet discovered roleplaying games. On one of our first days we wandered into a toy store in Munich – a wonderful shop (affiliated with the famous FAO Schwartz company) and I found two German-language roleplaying game boxed sets sitting side-by-side on a display: the German edition of Basic D&D (the Frank Mentzer red box version) and a taller, black box called Das Schwarze Auge. The game offered an opportunity to merge my interest in roleplaying games with my German language studies (a pillar of my junior high and high school years that fizzled out with the academic severity of college). So I bought it, brought it back to America, and, using my limited language abilities and a German-English dictionary, set about reading the game and rolling up a character.

Das Schwarze Auge basic boxed set came with one twenty-sided and a few six-sided dice, a main rulebook, and adventure book, an imposing gamemaster screen, and a host of sheets for mapping, character creation, and adventure tracking. The game had some similarities to D&D. Five stats defined characters, though one rolled only a single D6 and consulted a chart for the range of stat values one might get. It used a “class-as-race” system, so one could be a magician, fighter, elf, dwarf, or rogue-like vanilla “adventurer” (omitting such D&D tropes as clerics, thieves, and halflings). Magic-users had a reserve of astral energy expended to cast various low-level spells. A solitaire adventure took up most of the page count in the adventure book; it walked players through an initial encounter, then further exploration which led to the premise for the short if standard group exploration of a dungeon setting (the D&D basic set released around that time, the Frank Mentzer red box edition, was the first to include a solo tutorial adventure).

I didn’t get very far in the game beyond reading it with my very limited knowledge of German, rolling up a few characters, playing the solitaire adventure, and possibly running an adventure with my terribly patient brother (who also took some German). It helped fuel my enthusiasm for gaming and German language studies as I tried to learn how various bits of roleplaying game lingo translated into German. Several years later – when Das Schwarze Auge eclipsed sales of D&D in the German market – my Dad brought back some additional scenarios, including a solo adventure, from a business trip to Germany. At some point I also bought the “expert” version of the basic rules and a handful of adventures; possibly on that 1984 trip to Germany, I can’t recall, though I barely used the advanced materials.

Over the years I’ve acquired other German language game books from friends, industry trades, or chance opportunities, mostly as novelties: a Call of Cthulhu Dreamlands boxed set, a Stormbringer adventure collection, a nice hardbound GURPS basic set, a few Middle-earth Role Playing supplements, a handful of Star Wars: The Roleplaying Game books, and a Paranoia boxed set with the oddly understandable label “Acthung! Satire!” prominently displayed on the box. I’ve not gone out of my way to seek out German-language versions of my favorite games; my fluency has long passed with my fleeting youth, though I do appreciate the language and still read and speak some of it when necessary...just rarely outside the context of the adventure gaming hobby.