As the holidays approach everyone seems to offer their particular picks for ideal game gifts. Rather than bore kind readers with my particular recommendations based on my own tastes for adventure gaming fare, I thought I’d narrow the field a bit with a few qualifiers. Frequent readers know I’m an advocate of drawing new players into the hobby, with particular attention toward the younger set. As a father of a soon-to-be five year-old I’m also constantly looking for new, affordable games to garner his interest.

I chose games using a basic rationale focused incorporating several factors. The complete game had to come with a price tag of $25 or less. It must be currently available in analog format (sorry, no PDF, app or video game products). It had to have a family friendly theme since the list is intended for children ages 5-11 seeking something beyond mundane board game fare (though it also works for adults with a predilection for more involved games). The game uses mechanics and presents rules in a format kids could easily understand either on their own or with some guidance from an adult. The game also has merit – in my opinion – as a good game...not necessarily an outstanding, award-winning game, but a solid game with entertaining gameplay, decent replay value, and quality components.

Since these represent my personal recommendations, one should certainly not consider this a comprehensive list, but a catalog of suggestions limited by my own experience and impressions (and even then it’s not as complete as I’d like). While these might seem easier to acquire through online retailers, I urge readers to support their Friendly Local Game Store when possible; many can special-order titles they don’t normally keep in stock:

Dino Hunt Dice, $9.99: This press-your-luck game places players in the roles of time-traveling dinosaur hunters seeking to bag the most dinos without getting stomped. Each die has a few faces of dinos, leaves (for hiding dinos), and footprints (for stomps). A player rolls three dice, keeping dinos and setting aside stomps; three stomps and they’re done, losing any dinos they’ve captured. Players must decide when to finish their turn and keep dinos they’ve captured withouth losing everything to three stomps. There isn’t too much strategy, but kids might enjoyg it for the die rolling and dinosaur theme. (It’s cousin, Zombie Dice, uses a similar mechanic with a more grisly, less kid-appropriate theme.) 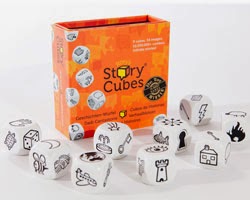 Rory’s Story Cubes, $7.99: These nine dice contain faces with pictograms to inspire storytelling. The game comes with several ideas for using them to help children create their own stories; experienced gamers and writers sometimes use them for inspiration or even solitaire adventure gaming. Two additional nine-dice sets offer icons based on Voyages and Actions, and three smaller Mix Collection packs (three dice each) have Clues, Enchanted, and Prehistoria themes. The Max version of the original story cubes, featuring larger dice, costs $19.99, well worth it for play with younger kids or for those who enjoy collecting oversized dice. 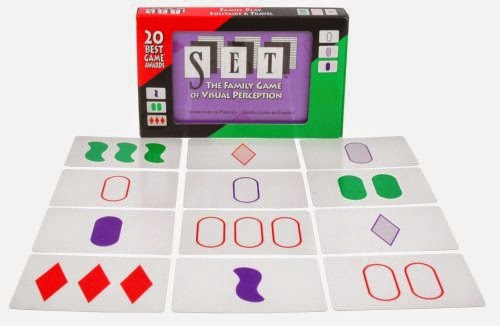 Set, $12.99: This abstract game challenges players to find sets of similar and dissimilar symbols on 12 cards arranged on the table. Each card has one, two, or three symbols of the same type and one of three different shapes (ovals, diamonds, and squiggles), colors (red, purple, and green) and shading (outline, shaded, or solid). Players watch for and collect sets of three cards each that are either all alike or all different in each attribute. Players remove the three cards in sets they successfully identify, replacing them with new ones drawn from the 81-card deck. Set’s numerous accolades include the prestigious Mensa Select Award. 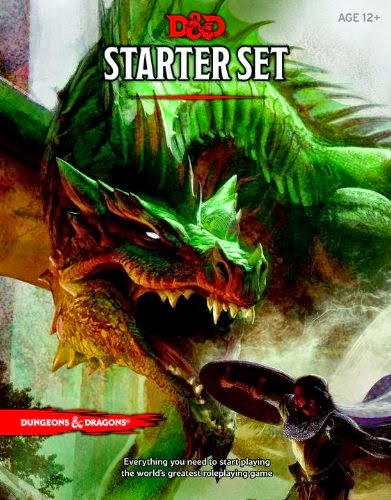 D&D Starter Set, $19.99: At this price getting into Dungeons & Dragons seems affordable and easy. While I’ve not yet examined this iteration of D&D starter boxes (a subject I’m fond of exploring), reports indicate it contains everything new players need to learn about fantasy roleplaying and dive into the game, all compatible with the latest, fifth edition of the iconic adventure gaming brand.

Dungeon! $19.99: For kids who might not be ready for full-on D&D roleplaying, Dungeon! offers a board-game version of dungeon-delving, monster-killing, and treasure-looting without too many complex rules. I’ve found it a bit random and arbitrary, even with the board segmented into increasingly more difficult levels; but newcomers to fantasy themed gaming might find this an easier transition from traditional board games to roleplaying games. The content – traps, monsters, and treasures – all derive from D&D equivalents, so they provide a good thematic introduction to setting elements.

Stratego Battle Cards Game, $9.95: Fans of the Stratego board game might enjoy this card-game versions, which takes less time to set up and incorporates a different kind of strategy, all while employing the same “fog of war” element that make the original game challenging. Players deploy unit to the battlefield based on a random draw from their deck, forcing them to use forces on hand and seeking to plug gaps in their lines on subsequent turns. While the rules are based on the same unit-value hierarchy and function as the board game, it offers a few twists to give players more options.

Robot Turtles, $25: ThinkFun’s edition of one of the most successful Kickstarter games of all time comes in at jus the right price point. The game gives kids control of a robot turtle wandering around a board’s obstacles to reach the prized gem; but players select command cards to enable the “Turtle Controller” (the designated adult) to move the turtle for them, giving them some fun, practical experience in skills useful in computer programming. Besides, the turtles have lasers.

Forbidden Island, $17.99: This one might require some adult guidance, but it’s perhaps one of the best examples of a “cooperative” game (without the more intense, real-world theme of such classics as Pandemic). Players try to retrieve four treasures from an island sinking in to the sea, simulated by location tiles that randomly flood and then disappear entirely. Each has a different role with special advantages, but they all must work together to move around the board, collect resources, shore up flooding tiles, reach the treasures, and escape before the island submerges completely. Forbidden Island’s numerous accolades include the prestigious Mensa Select Award.

I’d recommend almost any board game beyond the mundane fare one can find at Target or Barnes & Noble. Both chains have become more open-minded about stocking games that cater to the growing sophisticated board game culture characterized by such popular titles as Settlers of Catan, Ticket to Ride, Small World, and Carcassonne. Your Friendly Local Game Store is also a good place to browse possible board game gift ideas, ask the staff and regulars, and special order anything that isn’t in stock.

A few months ago I polled some folks on Google+ to help guide me in where to set the bar on this article. I asked:

What’s the maximum dollar amount you would spend on a non-electronic, game-related holiday gift for a young person between the ages of 5 and 11?

Assume the person is someone to whom you’d usually give a gift at the holiday and that the gift would be in some way related to the adventure gaming hobby, meaning it would expose them to or inspire them to explore roleplaying, card, board, and wargames (of both the board-and-chit and miniature variety). I’m not considering electronic games. Many thanks for sharing your opinions. 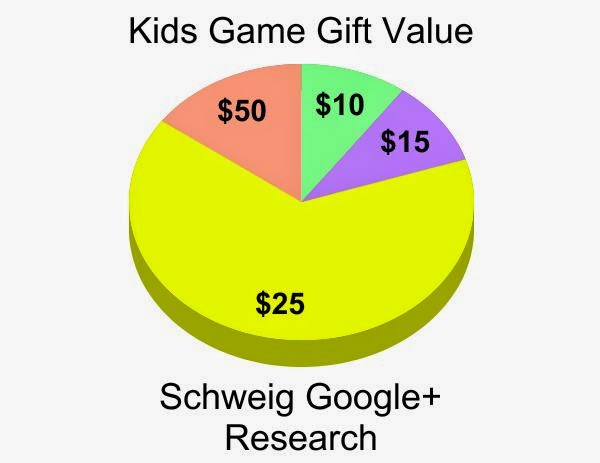 The $25 mark easily scored around two-thirds of the responses, with other amounts garnering a few votes here and there...and nobody going for the $100. At least one voter commented on the high cost to buy into games these days, whether a high-end board game, roleplaying game, or certainly a miniatures game. Although $50 or even $100 might buy an experienced gamer an appropriately pleasing gift, to tempt non-gamers or children into the adventure gaming hobby with an expensive gift that may or may not engage their enthusiasm remains a risky proposition.

Whatever your budget, keep games in mind as gifts this holiday season. Support your Friendly Local Game Store and encourage and cultivate a positive community of gamers in your area.

Comments....
Want to share your suggestions for $25 game gift ideas for the non-gamer set? Start a civilized discussion? Share a link to this blog entry on Google+ and tag me (+Peter Schweighofer) to comment.