In the “Golden Age of Roleplaying Games” of the early 1980s miniatures seemed an integral part of roleplaying games like Dungeons & Dragons, not surprising considering the hobby’s origins in miniature wargaming. Well before game stores stocked walls of Warhammer or Reaper miniatures for every conceivable fantasy race and monster – and before the rise of popular, tournament-driven fantasy battle games – hobby stores often settled for whatever they could get from distributors at the time, usually from one of the two pillars of the miniatures producers, Grenadier Models and Ral Partha. 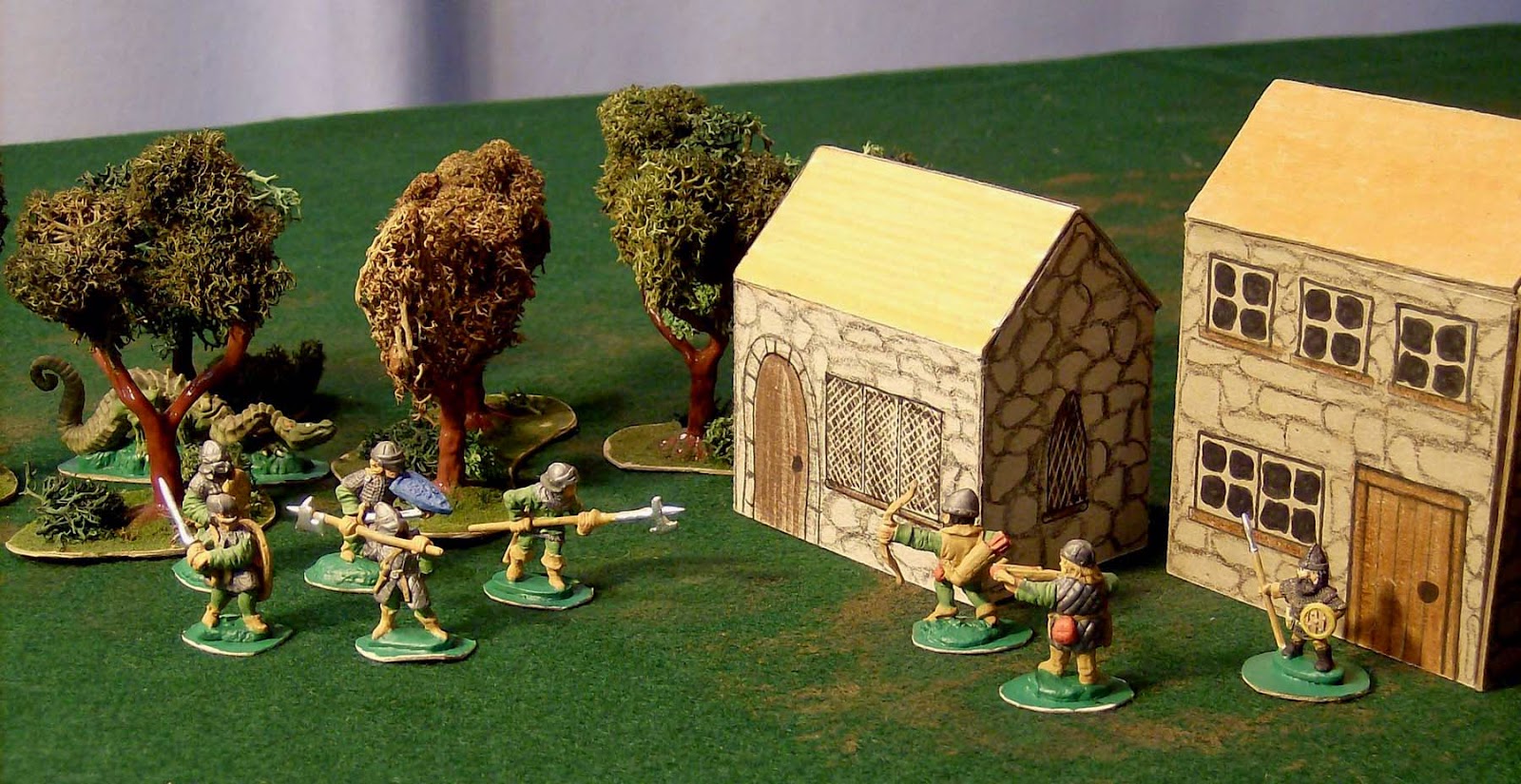 I still have some of the earliest miniatures I bought and painted, though I have since re-painted them after much practice and gaining a slightly better ability (though nothing I’d brag about). The Christmas after I discovered D&D I’d received boxed set 2009, “Wizard’s Room,” as a gift but found no practical use for it in my games. Later I bought Grenadier Models boxed set 2005, “Fighting Men,” and a single model of a dwarf holding a spear (possibly Ral Partha but maybe RAFM). The latter I bought specifically to use as a test piece for painting with the TSR Official Advanced Dungeons & Dragons Basic Paint Set (also received as a holiday gift). I wasn’t too discouraged by my paint job (until years later when I realized it looked simply terrible), and collected a few more Grenadier miniatures to add to my collection, most notably some orcs, skeletons, dwarves, a giant, and some dragons.


I think my gaming group of high school buddies actually used miniatures once or twice during a roleplaying game session, more to indicate marching order than anything else. Rarely did I have proper monster miniatures for all the creatures encountered in a scenario, and back in high school I hadn’t quite realized I could simply create my own adventure featuring the monsters for which I had figures, though even then the bestiary would have remained rather limited.


Instead I used my growing collection of painted fantasy miniatures to stage battles between orcs, men, skeletons, and dwarves using fairly simple home-brew rules, some painted foam hills, HO-scale railroad trees, some cardboard buildings, and a few other props. The system was extremely simple compared to the numerous miniature wargames available on the market or for free today. Each unit had a single stat, the number on a six-sided die each soldier had to roll equal to or higher to hit opponents or save if hit themselves. Over time I developed different systems for movement (usually either completely variable or a base move with a bonus from a single die roll) and special units. (The rules completely lacked any morale mechanics; I assumed forces would attack each other until nobody was left or players withdrew them.) I still have several iterations of the rules, hastily scrawled in pencil on some lined sheets of paper and a host of note cards, some of which have actual scenarios jotted on them.

In my early gaming days I rarely used miniatures in roleplaying games. They seemed an additional distraction when players were gathered around a large dining room gaming table and reaching over character sheets, dice, snack foods, and cups of soda to shuffle their heroes’ miniatures into the proper marching order or attack formation. I quickly came to associate minis more as pieces in miniature wargames than as roleplaying game accessories.

Many years later in my adult gaming days a friend ran a regular fantasy roleplaying game campaign using home-brew rules and relying heavily on miniatures for visualizing tactical situations. I even bought, modified, and painted miniatures for my grumpy dwarf character and my wife’s cat-kind, fireball-slinging magic user. Someone had a slew of pre-painted plastic D&D miniatures, so we always had something approximating our foes to scatter around the table. Most everyone seemed to enjoy the visual enhancement minis brought to the game table; yet from this player’s perspective it felt a lot like acting out a top-down video game. I tend to prefer fairly fast-and-loose play when it comes to combat (both as a player and gamemaster), so it came as no surprise that I found these tactically exacting skirmishes more frustrating than usual; the large number of players involved, limitations imposed by range and line of sight to target, and the technicalities of moving around the encounter space all exponentially increased the time we took to resolve combat and hence wore away at my personal level of engagement.

That isn’t to say I’ve never found an effective and engaging use for miniatures in roleplaying games. Although in my gaming youth I bought and painted minis yet didn’t use them much at the gaming table, in later years I found them effective tools when running roleplaying game demos at conventions and in stores. Even a small set-up with some diorama pieces and figures can draw potential players and spectators to the table, help engage them in the game, and, theoretically, get them to make a related game purchase.

Of all the senses, sight remains the primary one on which most humans rely. Setting a roleplaying game scene visually – something usually reserved for players’ imaginations – shares it clearly with others and immediately attracts them to the table to discover more. Part of the appeal of miniature wargaming – even to newcomers – remains the wonderful visual spectacle of a table strewn with terrain and troops; the fact that these aren’t static displays but actual “boards” with “pieces” players control increases the appeal. Presenting roleplaying games in this manner seems more personal since participants play single heroes and have greater capacity to explore the entire scene.

During my time with West End Games I sometimes used miniatures and wargaming-style dioramas for demo games. I theorized that the set-up’s visual appeal would attract prospective players, and the figures and diorama would approximate “pieces” and a “board” to help those who’d played traditional games transition into roleplaying games. Wherever I used this approach it worked effectively to draw people to our demo space, sales booth, or game table; at the very least they spent a few moment to examine the set-up, but many joined in quick demo games or even full adventures.

Over the years I’ve acquired, crafted, used, and sold a number of miniatures diorama pieces for use with roleplaying games, both with West End Games and with my Griffon Publishing Studio endeavors. Among the most versatile materials I acquired was a set of modular mountain pieces (three inches high each) the fine folks at GeoHex produced in the late 1990s. This enabled me to build wonderfully high scenery simulating rough or mountainous terrain I used in both Star Wars and Hercules & Xena roleplaying game demos. These worked well with other pieces – an Imperial scout camp with bunker, barracks, and a vehicle hangar, medieval buildings, forest trees, and monster lairs – for several short demos and even a full scenario. I designed an entire Star Wars adventure (The Lambda Heist, later published in Wizards of the Coast’s Star Wars Gamer magazine) incorporating the mountains and scout camp, Mos Eisley (more on that below), and a starship junkyard I built. Years later I built a modular ancient Egyptian tomb diorama for running an introductory scenario to promote Griffon Publishing Studio’s Pulp Egypt setting.

But perhaps my most ambitious project was the downtown Mos Eisley diorama, built in a custom-made traveling box my brother designed. I based the diorama on the wonderful map included in Tatooine Manhunt and populated it with Star Wars miniatures, crowds of Galoob MicroMachines Jawas, and a few vehicles, including a landspeeder, AT-PT, speeder truck, and a modified YT-1300 freighter for the docking bay. My brother also crafted a model of the cantina interior (also to scale with the Tatooine Manhunt color map) so action could naturally start in the cantina, then transition to a chase through back alleys, and ultimately lead to a confrontation with Imperial forces cordoning off the docking bay with the heroes’ starship. The mere presence of the diorama drew people to our table, and I recall running both quick pick-up games on it as well as incorporating it into more extended scenarios like The Lambda Heist.

Some of the terrain – the pre-fab mountain pieces, the Imperial scout camp, and the starship junkyard – I sold years ago, but much of it, and the painted miniatures, I keep for my current and future use. Although I’ve been tempted many times over the years, I’ve not sold my portable downtown Mos Eisley starport diorama...it needs some repair work anyway.

A Return to Minis

I expect I’ll use miniatures again when I start introducing roleplaying to my now five year-old son; those and some basic map props can help him transition from board game concepts, especially when he might have difficulty visualizing situations in his head. He’s already interested in various miniature wargaming elements, particularly plastic toy soldiers and monsters. I have a small stash of pre-painted plastic miniatures to augment my painted metal minis and can fill out the ranks of adversaries with print-and-play paper minis, too. Aside from drawing my own dungeon maps to scale, I’ve thought about using Billiam Babble’s fantastic Inked Adventures print-and play products, hand-drawn, top-down modular dungeon sections (I’ve already printed, mounted, and trimmed several of the free sets and had fun playing around with them). But I’ll pursue all this at some future point when I’m a bit more prepared to explore roleplaying with kids...and miniatures.