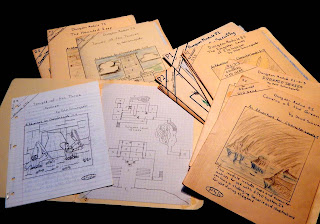 I modeled my homemade adventure modules after those from TSR, being the first I saw as a gamer and occupying, in my youthful estimation, the pinnacle of a professionally published roleplaying game scenario. With that in my subconscious mind I began creating my own scenarios in that mold. Manilla folder covers incorporated similar elements: titles, central boxed illustration, corner banners denoting “For Dungeons & Dragons,” a letter and number designation, such as “D1,” a brief summary blurb, and even a little “PSG” logo, for “Peter Schweighofer Games.” (Even back then I had such aspirations to become involved in adventure gaming publishing.) I taped graph paper maps inside the covers, just like the published versions. Adventure booklets contained my scrawled text, sometimes with boxed “read aloud” paragraphs, other times relying just on room descriptions. I wrote most by hand, though in later years – when I was helping to run the local public library’s summer D&D program – I typed my adventures on the family’s old Smith Corona portable typewriter. Back in the early 1980s we didn’t have personal computers, desktop publishing, laser printers, or PDF documents. I did everything by hand, from the rounded print handwriting with poor spelling and grammar to the colored-pencil cover illustrations and marker cover text.(I briefly considered finding one that seemed somewhat bearable to scan and assemble into a PDF to share with folks, but that’s a lot of work to show off what terrible dreck I made as a kid.)


The adventures seemed special to me at the time, but by today’s standards – and certainly by professional standards – they’re dreadful. They’re packed to the gills with way too many traps, nonsensical room layouts, unbalanced encounters, piles of treasure, and cliches taken from my favorite books and films. The later ones I typed up for the public library summer D&D program exhibit content and the jokey tone of some of the scenarios appearing in Dragon Magazine at the time. The titles speak for themselves: D1 Tomb of the Forgotten Princess, T1 The Haunted Keep (based on a map and outline in the Basic D&D rulebook), T2 Tower of Thieves, E1 Fort of the Elven Raiders, E2 Hideout of the Grugach Prince (incorporating an alternate elf race from Dragon Magazine), B1 The Forgotten Caves of Elalasasar, B2 Through the Mines of Moria (obviously inspired by some fantasy trilogy...), B3 Temple of the Three Medusa. (I have, of course, left out the more obviously embarrassing titles.) I later wrote a few for Star Frontiers when I dove into that game; they demonstrated an urge to incorporate the science fiction media to which I’d been exposed and which, at that time, hadn’t really appeared much in roleplaying games...particularly Doctor Who and Star Wars.


What positive lessons can I possibly glean from this pile of hand-scrawled loose-leaf paper adorned with cartoony artwork and filled with a mish-mash of lame adventure ideas?


When we’re excited about roleplaying games we create. Way back then I channeled my enthusiasm into these creative efforts, to design material to further our adventures beyond the published material we owned. To that end I tried making something that looked (however woefully inadequately) like the publications I admired (that also explains my urge to create my own equally awful-looking gaming fanzine at the time). Whether we’re writing out full adventures, drafting maps, or taking notes on traps and monsters, we’re focusing our excitement into something to use at the game table. For a more recent example, I’ve lost count of the number of times I’ve started thinking about designing a solitaire tutorial scenario for James Spahn’s White Star roleplaying game since it released...but I just don’t have the time (or a viable idea); that hasn’t stopped numerous enthusiastic fans of that recently released game from creating and sharing their own material.

We infuse our creations with stuff we love. Aside from the obvious elements of a roleplaying game we want to incorporate into our own material (such as tons of traps and magical items), we pull from other sources we admire and try to combine them into a new form or setting. Whether I was trying to emulate TSR’s scenario trade dress or borrowing elements from popular media (such as Moria, Doctor Who Cybermen, or the oft-used giant-round-boulder-rolling-down-an -incline trap from Raiders of the Lost Ark), I wanted my game experience to reference other themes I felt would enhance my own amateurish endeavors.


Our creations have substance. These sad attempts at game scenarios remain the earliest evidence of my philosophy that it isn’t real if it isn’t in print. Once a scenario (or other game material) takes “physical” form as a book or PDF, we can return to it and run it more than once without dredging our memory, or we can share it with someone else to read and run. A handful of notes or some map sketches don’t really impart much information to a person who didn’t create it; but a more polished format can organize and present relevant game material to share with others, jog the creator’s memory, or sit around for years waiting to embarrass said creator with his early amateur efforts.

Looking back helps us look forward. Yes, I cringe when I look at these modules. Maybe the maps are the best thing about them, since the writing and illustrations reflect the abilities of a 13 year-old in the tumultuous energy of the hobby he’d been waiting for all his life. But we need these benchmarks – however amateurish and poorly spelled – to remind us how far we’ve come, help us remember the unbounded, audacious enthusiasm we had for this exciting new hobby, and provide confidence and perspective on our future endeavors.

“Doubt is the vestibule through which all must pass before they can enter into the temple of wisdom.”
– Charles Caleb Colton (1780-1832)

Want to share your opinion? Start a civilized discussion? Share a link to this blog entry on Google+ and tag me (+Peter Schweighofer) to comment.
at 7:16 AM