Mongoose Publishing recently released a playtest PDF for its latest edition of the venerable Traveller roleplaying game...charging $20 for the privilege of perusing, playing, and helping to improve it. It’s an opportunistic strategy I’ve seen before – with all three slightly variant flavors of Fantasy Flight Games’ iteration of a Star Wars roleplaying game – and don’t particularly like, even if publishers have internal financial justifications for it. The news of yet another edition of Traveller raises the issue of whether gamers need new editions of classic games. 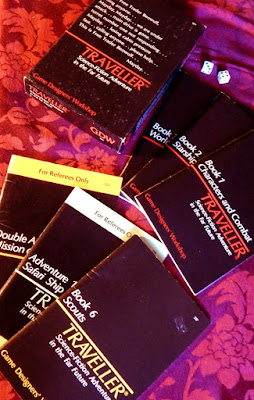 From a publisher’s perspective new editions serve numerous purposes: updating outdated mechanics and changing meta-story setting materials; revising the game line’s graphic presentation to appeal to current tastes; and relaunching a game line (including the inevitable parade of supplements) to reinvigorate sales. I can certainly attest to this first-hand from my involvement with West End Games. As a gamer I enjoyed the first edition of The Star Wars Roleplaying Game. Just before I joined the company to establish and edit The Official Star Wars Adventure Journal, West End released a second edition of the rules, purportedly to combine and revise rules additions and interpretations released in various supplements over the years. Ultimately the company published a Revised & Expanded edition of the game, a sort of 2.5 release, affectionately dubbed “super-mondo” by the staff because it had the largest page count and was the first to feature full-color throughout, including both movie stills and original full-color artwork. Each of these subsequent editions fulfilled many of the objectives outlined above – updating rules, revising graphic presentation, and relaunching the line – even though the original version remained playable (with personal rules interpretations) and quite enjoyable. Despite my own preferences for the game’s first edition, I towed the company line and dutifully supported each edition in turn, writing source material and running convention games using the latest version (despite my overwhelming misgivings about the notorious Wild Die...).


From a publisher’s perspective subsequent editions have the sometimes unexpected, deleterious effect of fragmenting their customer/player base. Despite a publisher’s best intentions, players sometimes rally around their favorite older edition. While one might debate whether this leads to lower sales of the new edition, the animosity between proponents of different editions often becomes very apparent in “edition wars” across internet forums and other venues. I certainly don’t advocate vehemently crusading against those who don’t share your views – as Pete the Cat says, “It’s All Good” – but I don’t think gamers should feel pressure to buy into every new edition of every classic game they ever enjoyed. Gamers should celebrate whatever edition they feel meets their gaming needs; many have, particularly the vocal, creative community supporting the Old School Renaissance movement (OSR) reveling in early game concepts

But do gamers need all these new editions of classic roleplaying games, or even of recently released ones? The answer varies. Publishers no doubt believe a new edition seems necessary for any of the reasons outlined above. Consumers, however, have different motivations. Some gamers buy into any game, new edition or otherwise, that interests them. Others pick and choose based on price point, interest, player tastes, play style, and many other factors. Certainly there’s still a market for new editions, even with the high price tags (or gamers paying for “playtest” versions...). Some of them are quite worthwhile, depending on your particular tastes in setting, mechanics, production value, and price point. Sometimes new editions offer evolutions of game systems we can incorporate in our games. Third edition Dungeons & Dragons, for instance, introduced the first inklings of what’s now called “Ascending Armor Class,” as well as a difficulty target number scale, an intuitive skill system, and special feats, some of which appeared in other earlier games but finally coalesced together in this particular edition of D&D. Even if such new material provides a few tidbits gamers can glean to incorporate into a current game – new optional rules, spells, magic items, classes, equipment, setting elements, scenarios – the purchase seems worthwhile.

A Return to Basics

My own preferences tend toward a return to basics. These remain based in my past and current gaming interests, my current mid-life situation with limited time and funds, and my constant vigilance for games to play with my son when he grows old enough. I don’t have much spare cash to spend on shiny new editions of games I already have, many of which I enjoyed in their original incarnation. I don’t have time to immerse myself in a huge game tome, enhanced setting, and updated rules, no matter how complete and graphically pleasing it looks. I find myself turning to many of the classic games I enjoyed in my younger days. Much of this urge comes from remembering the simple excitement of immersing myself in then-new games and the joy I felt at expanding their imaginative reach by creating rules interpretations/expansions, original settings, and my own adventures, a feeling other gamers might share.

I look to my vast roleplaying game bookshelves and spot a host of titles with newer editions, yet whose “classic” editions satisfy my current gaming urges more completely:

B/X Dungeons & Dragons: I’ve discussed my preferences for “B/X D&D” before. While nearly any early version of D&D provides a useful platform upon which players can build their own fantasy adventures, I find B/X D&D the most “polished” in terms of rules and presentation; it’s the one that most closely fits my personal ideals of D&D. I’ve tried other editions, particularly second and third; while I enjoyed my third edition game experiences, and found much in the mechanics worth adapting elsewhere (skills and ascending armor class in particular), the vast tomes and increasing complexity often overwhelms me. I still find myself debating whether or not to immerse myself in the most recent fifth edition. Perhaps I’m more interested in the beginner approach in the starter set than the full, three-tome game.

Space 1889: I loved this game when it originally released; I even ran a summer-long campaign for friends (though we easily converted the somewhat clunky GDW system to D6). I have a host of supplements (not quite all) and many issues of Challenge Magazine packed with adventures and source material (much by the prolific James L. Cambias). Since GDW’s demise and the game line languishing (though some reprints kept it fresh in gamers’ minds) it’s seen a reboot as Space 1889: Red Sands using Pinnacle Entertainment Group’s Savage Worlds system. While I like Savage Worlds as a system, and was sorely tempted the first time I flipped through the full-color Red Sands book at a convention dealer’s table, I don’t feel like paying for a shinier version of something I already have that works for me.

Thieves’ World: While not a game system on its own, the original boxed setting published by Chaosium in the early days of roleplaying remains one of my favorite game relics. Aside from providing stats in numerous contemporary game systems (quite a feat in the litigious atmosphere of 1980s gaming), it most closely accommodates my experience immersing myself in the first two Thieves’ World anthologies. Green Ronin published a revitalized line of Thieves’ World game books during the d20 craze; no doubt it produced some outstanding source material, but nothing I personally need to improve upon the already expansive possibilities and components included in that original boxed set. Certainly the price point and the number of books make it a daunting setting to purchase.

Star Wars: The Roleplaying Game: Despite my work under the second edition rules and my direct involvement in the Revised & Expanded version, I still turn to the core of first edition rules when running Star Wars roleplaying game sessions (or anything based on the D6 System). Certainly I wrote for both iterations of the Star Wars game published by Wizards of the Coast when it had the license, and maybe ran scenario or two at conventions in an effort to two the company line as a freelancer, but few things can override my satisfaction and ease of play with West End Games’ first edition of this game world.

Traveller: The announcement of yet another edition of Traveller inspires me to return to my modest collection of classic “little black books” and the small trove of material I created long ago when I had time to indulge in the game. I have wonderfully nostalgic memories of running some games for friends and spending hours rolling up characters (some of whom died during their military careers...), creating settings and adventures, even drafting a solitaire scenario. Perhaps my bias against new editions comes from my experience with MegaTraveller, a revised version GDW released as a kind of second edition to reinvigorate the line and the setting continuity; it failed, for me, at least, to meet my expectations for the game. I occasionally find original Traveller supplements and adventures at gaming flea markets and pick them up (when affordable). I’d love to find a copy of The Traveller Book and The Traveller Adventure to round out my classic collection and consolidate the three little black books into one.

I have a few notable exceptions for games I have no issues about supporting in new iterations:

The OSR: I’m not sure if this is an exception of my urge to return to basics or a further celebration of it. Many OSR retro-clones hearken back to the old rules conventions (some with innovations and new twists). They encourage the kind of play and imaginative game world development among readers that inspired early gamers. Both help define the allure the OSR retro-clones have for many people. The OSR movement also provides a host of material – rules, settings, adventures, admittedly of varying quality – for free. I’ve discussed my recent interest in the OSR before. Part of its great appeal comes from providing new inspiration for my own forays into D&D: interesting rules interpretations, new classes and monsters, scenarios to mine for ideas. While I don’t go out and buy every new iteration of the D&D experience in an OSR game, I do enjoy finding and reading those that best match my ideals for this kind of gaming. I particularly like finding new supplements to expand my repertoire of classes, monsters, treasure, and other elements. Buying into the OSR represents an extension of my satisfaction with B/X D&D.

Tekumel: I’m a sucker for any new iteration of Professor M.A.R Barker’s Empire of the Petal Throne, the distinctly non-western, extremely alien, and awfully intriguing setting as old as D&D itself. In this case each new iteration of Tekumel emerges with a new set of mechanics as well as a new method of introducing the often-complex and unfamiliar setting elements. I own at least four different Tekumel games, including the latest from Jeff Dee, Bethorm, and the Theater of the Mind Enterprises version, which relied on a delightful solitaire programmed adventure format. While these aren’t technically new editions of a classic game, they’re new versions of a classic setting. None seem to really appeal to me as a favorite classic game. The setting appeals to me more; my continued interest acquiring new versions emerges from a hope the game system and world presentation fulfill my criteria for an engaging yet basic game experience.

Like any gamer, I evaluate my game purchases on a case-by-case basis. But unless a new edition really stands out in areas important to me and my gaming style, I can do without it. Publishers will continue to reboot successful and even nostalgic game lines with new editions; it’s what they do, especially when they have access to a popular game property. Contrary to popular beliefs on the internet, classic games never die; as long as they fuel the enthusiasm of gamers, even when taken from the shelves and perused now and then, they continue to live.

Want to offer feedback? Start a civilized discussion? Share a link to this blog entry on Google+ and tag me (+Peter Schweighofer) to comment.
at 8:14 AM