I recently picked up Star Wars Duels, a card game from Hasbro with an obviously popular theme, at the behest of the six year-old Little Guy, who saw it on sale at our grocery store and immediately wanted it to try for our weekly family game night. I’m not a huge fan of card games, though we have a number we enjoy because they’re right at the Little Guy’s level and work with engaging themes (particularly Godzilla Stomp and Otters). Star Wars Duels pleasantly fits into that category, combining modified “War” gameplay with colorful images of Star Wars characters kids love. 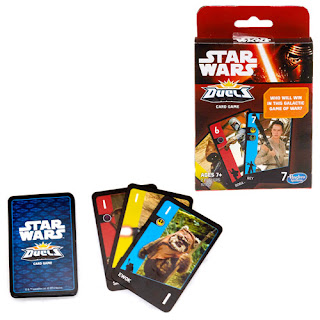 The 54-card deck comes with a rules flyer and a reference card for some of the symbols used in the game. They’re standard playing card-sized cards, though given the box size and the intended audience I somewhat expected slightly larger, more kid-friendly cards. Each card comes with a blue, red, or yellow border for the heroes, villains, and neutrals (mostly creatures); a full-color photograph of the character; their name; a card value from 1 to 10; and one or two symbols related to the character’s affiliation. The heroes and villains each have 23 cards, with 8 yellow cards devoted to neutrals. Card values seem a bit inconsistent, but vary from a standard playing card deck spread: 8 to 9 cards of the lower values (1–3); 4 to 7 cards of the middle values ( 4–6); and 3 to 4 cards of the highest values (7–10).


The rules provide a structure much like the card game “War” but with several twists. Players divide the deck evenly, then draw five cards for their hand. Each turn the winner of the previous round plays one, two, or three cards while the opponent tries playing cards to beat the total value of cards played. One just can’t toss out any three cards, though; cards played must have matching affiliation symbols which have nothing to do with the card value and everything related to the particular character on the card. The rules call these “power-up link symbols” since they essentially allow players to “power up” one card with additional related cards. Blue hero and red villain cards have one or two symbols denoting their association with the Jedi, Rebels, Droid Army, Sith, or Bounty Hunters. (Neutral yellow cards have no such symbols, making them weak on their own; except for Anakin Skywalker from the prequels, who’s associated with both the Jedi and Sith). So one might play C-3PO (3) and Admiral Ackbar (3) together since they both have Rebel symbols, for a total of 6. Some have more than one symbol allowing for some interesting combinations.

I’ve discussed the limitations of the children’s card game “War” before and my historically themed solutions to its complete lack of player choice. Star Wars Duels modifies “War” significantly enough to make it a game filled with player choices and fun tension. The use of a five-card hand – similar to the “strategy war” variant of the game, where players choose one card to play from several they hold in their hand – gives the otherwise simple game a significant element of player choice. Enabling players to form thematically appropriate combinations of cards increases the range of choice: do they play a powerhouse combo this round or save the individually powerful cards for later? The game uses an interesting mechanic for breaking ties in which each player puts up three cards as collateral and re-fights the battle with cards remaining in their hand; the winner takes all...the collateral, the cards from the tied battle, and the cards used in the tie breaker.

A great deal of this game’s appeal among young players centers on familiar Star Wars characters. Kids might find the cards appealing with their large images of characters from the prequels, classic movies, and The Force Awakens. The odd combinations or strange adversaries can sometimes provide humor: Kylo Ren (8) beaten by young Obi-Wan Kenobi (9); or Padme (4) and BB-8 (2) (both Rebels) against C-3PO (3) and an Ewok (1) (also both Rebels). The Little Guy even made some amusing associations on his own, commenting that at one point he played mother/daughter combinations of Padme and Leia and a father/son combo of Anakin and Luke. Ignore the in-game continuity of various characters from different sides and in-universe eras battling against each other and avoid analyzing why one major character’s card has a lesser value than another; one can find that kind of thematically faithful action in other, more involved games, but not at this enjoyably basic level.

The rules also include a quick-play variant in which players split the deck by red and blue cards, essentially playing the light side and dark side of the force, with the yellow neutral cards evenly and randomly divided between them. This game seems ideal for younger or newer players, since the game ends when one player depletes her draw deck; the player who captured the most enemy cards wins. It’s far more satisfying thematically than the regular game, as it pits light and dark side characters against each other, though characters from the prequels can still battle those from The Force Awakens.

The game certainly reinforces school concepts such as number recognition, addition, and greater than/less than, all with a pleasant veneer of Star Wars to distract them from the fact they’re actually putting their lessons to good use.

As with “War,” Star Wars Duels can seem to stretch on forever as one player tries to deplete the other’s deck. When we play we agree on a limit, usually the number of times we go through the deck. The quick-play variant rules offer a shorter game with its single pass through each player’s deck, ideal for younger kids with shorter attention spans (and impatient adults). One could also play the regular game with three or four players, deploying cards face-down to reveal them simultaneously.

Star Wars Duels offers a satisfying game adults can share with kids incorporating a popular theme that can help keep everyone engaged. For us it’s provided a break from more serious, complex gaming fare, a chance to reinforce math lessons from kindergarten, and some humorous moments making odd character combinations. The recommended age of “7+” works best; younger players with a fluency in numbers from 1–10 and some basic addition skills could play it with some coaching (the Little Guy is six years old and did just fine), while older players approaching 10 might find it boring, especially if they’re used to their parents exposing them to more involved games.