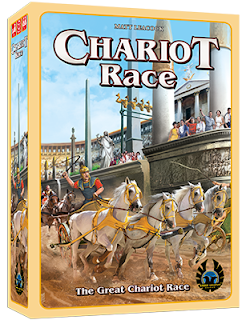 
When I heard about Leacock’s Chariot Race I was cautiously intrigued. The game appealed to my interest in ancient history, my enjoyment of the chariot race in the original Ben Hur film, and my appreciation for rules that offer plenty of player choice for strategy in an intuitive format suitable for casual board game play. The game seemed to deliver on the “casual board game” end of things: appropriate for 2-6 players ages 8+, with an estimated 30-40 minutes play time. The Kickstarter particulars seemed fair to me: $24 plus $5 shipping in the continental United States, delivered in December (Eagle-Gryphon Games is manufacturing Chariot Race now in cooperation with co-producer Pegasus Spiele in Germany, which is releasing it through retail channels in Europe). Components include a double-sided race track board, six chariot boards with pointed clips to track stats, caltrop marker cubes, lap counters, cardboard, stand-up chariot pieces, and five custom dice. I’ll admit the title wasn’t terribly inspiring, the chariot stand-ups seemed slightly underwhelming, and the stat card clips looked like office-store surplus, but after examining the eight-page, full-color rules PDF, became convinced that Chariot Race was worth my support. 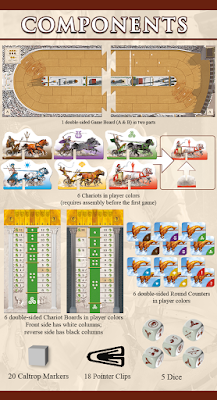 Matt Leacock brings his experience in game design and innovation to Chariot Race. I’ve not played his Roll Through the Ages games or the copy of Pandemic on my shelves, but we’ve thoroughly enjoyed the challenging cooperative play in Forbidden Island more times than I can remember. At first glance Chariot Race might look like a Circus Maximus knock-off, but it re-interprets wargaming elements of that game in a wholly original, family friendly board game format for the genre. Players pick a chariot and board on which to track three key stats: damage, speed, and fate. Each is listed on a track along one of three sides, with the clips used to point to the particular values. Damage reflects various factors like the chariot’s structural integrity, fatigue on the team of horses, and physical damage inflicted on the charioteer. Speed represents the number of spaces players move each turn; players increase or decrease speed and change lanes based on die rolls, but the higher their speed the lower the number of dice they roll each turn. Fate points, represented by the goddess Fortuna, allow players to repair damage, re-roll dice, or even choose the particular result on one die.

Starting with the lead chariot on the track, players take a series of actions. They first have the option to call on Fortuna to repair damage (assuming they have fate points). They must adjust their speed downward if it begins the turn higher than the chariot’s damage tally. After rolling a number of dice as indicated by the current speed, they can re-roll any number of dice once; spending two fate points allows a player to either re-roll any number of dice again or turn one die to a particular face (and players can do this repeatedly if the can pay the fate point cost). Symbols on the dice give players various options in the move and attack phases: the veering arrows (the only symbol on two die faces) enable a lane change; the face with javelin and caltrops allows a player to attack others, leaving caltrops in one space they’ve passed through (damaging the next chariot to pass through that space) or hurling a javelin at someone within two spaces (automatically inflicting one point of damage); two faces affect speed, either increasing/decreasing it by one point or increasing it by two points (and causing a point of damage); the last face, that of Fortuna, gives the player a point of fate. The player then moves a number of spaces equal to their speed, veering around others if they can, ramming them if they want (inflicting two points of damage on each chariot). Speeding through a turn can also inflict damage if the chariot’s going at a greater speed than that listed on the lane in the curve. If, at the end of a turn, any chariot has made two circuits around the track, the game ends with the front-runner as the winner.

Managing the dice within the parameters of re-rolls and Fortuna can enable or limit players in their movement and maneuvering around the track. They also give opportunities for outright attacks and ramming. The dice help determine what choices players must make each turn. Do they spend fate points to re-roll dice? Can they manage their speed with the final dice results? Do they ram someone ahead or veer around them? Front-runners must out-strip their opponents, who can come up from behind and attack and ram.

Chariot Race incorporates several elements I particularly enjoy: the ancient history theme; the vulnerability of the front-runner; dice management and push-your-luck elements similar to that used in King of Tokyo; plenty of player choices generated by that dice mechanic; and multiple ways to use Fortuna to enhance one’s position. Much as I enjoyed our refereed convention experience with Circus Maximus, Chariot Race looks like it can deliver a similarly thrilling experience to our tabletop with some family friendly rules.

Want to review the rules for yourself? Download the PDF of the eight-page, full color rulebook from the Kickstarter campaign website. The game recently reached its funding goal on Kickstarter and it has no stretch goals; since it’s already in production, it’ll be ready to ship in time for the holidays. If the chariot racing theme attracts you and you’re looking for a game with lighter mechanics than the wargame-style Circus Maximus, Chariot Race might be the right game for you. I’ve already made my pledge for a copy and look forward to receiving it in time for my holiday gaming season. It’ll also provide a good excuse to watch Ben Hur with the family.