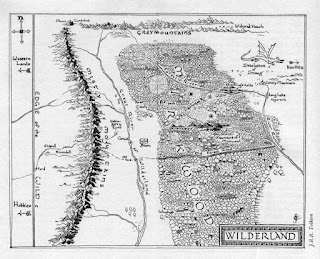 
My own journey of inspiration from maps began with The Hobbit. I loved the maps included in the novel: a treasure map in the dwarven style and a regional map of “Wilderland” where the story took place. The treasure map might serves as a good example of a possible in-game prop, but the Wilderland map fired my imagination with its various tags. Even after all these years – and having read it to myself and aloud to my son innumerable times – that map still stirs my creativity. What are those lands like after the events in The Hobbit? What lives in the Mountains of Mirkwood? What’s the best route to take a mule-train of pipe weed from the Shire to Erebor? How do the woodmen figure into the region with Beorn and the goblins? What hazards lurk along the Old Forest Road? Getting The Atlas of Middle-earth as a kid helped fuel my enthusiasm for Tolkien’s Lord of the Rings and Silmarillion as well as my own gaming endeavors. Even today a map in a fantasy novel helps me relate characters and cultures to places and visualize where events occur. I’m reading Fletcher Pratt’s The Well of the Unicorn and constantly refer back to the small, single-page map of the realm where the story takes place; it helps me immerse myself in the fantasy world, much like roleplaying game maps. 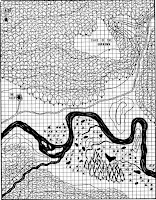 Dungeons & Dragons certainly fostered a love for maps. The Basic D&D set I received that began my roleplaying journey in 1982 provided maps in both the rulebook and enclosed module, B2 The Keep on the Borderlands. The adventure included maps for the eponymous keep, the surrounding wilderness, and the Caves of Chaos with its labyrinth of monster lairs. The wilderness map in particular invited exploration as the Cave of the Unknown was left to the gamemaster’s designs. I eventually fleshed out the “Haunted Keep” offered as an example of dungeon design in the basic rulebook, using the map as the basis for its own full-length adventure. The D&D Expert set continued this map-based inspiration with its map of the Grand Duchy of Karameikos and the two-page map of the known world and Sea of Dread in module X1 The Isle of Dread. Upon purchasing a new D&D module I’d tear off the shrink wrap and, after admiring the artwork on the interior booklet cover, look over the map to see what it might tell me about the adventure. Along the way, with plenty of time in my high-school days for immersion in roleplaying games, I devised a slew of maps, some developing into full adventures, others languishing as only initial concepts for future scenarios. As I explored other games and genres, I drafted maps for roleplaying in those settings, too. even used maps of existing and self-created fantasy worlds in my own miniatures games, where each figure represented a unit in some faction’s army, marching across hexes, fording rivers, crossing mountains, capturing cities, and forging their own military narrative on my tabletop.

Maps continue inspiring us, inviting us to explore them. Dyson Logos, Matt Jackson, and other map creators lend gamers their visual creations to populate as they like for their own adventures. Play some of the wonderfully succinct, map-based mini-adventures from Tim Shorts, Simon Forster, Michael Prescott, and others. A single location-based graphic can provide the material for an entire night’s adventure; a regional or world map can form the basis for an entire campaign. I love the map of the Brecken Vale from Justin Halliday’s Hero Kids; it visually describes an area rife with adventure possibility, both in the printed scenarios he offers and in the inspiration little graphics provide for this gamemaster dad pestered to run another game session.

Maps serve as the departure point for exploration in roleplaying games: the gamemaster devising adversaries, encounters, and adventure hooks based on map locations; the players asking questions about what characters might know about various features and then planning how they might interact with what they find there. They help channel the creative energies we pour into our gaming exploits, providing a visual focal point and the foundation of our understanding of an imaginary fantasy world.