As a writer, designer, and gamer I use solitaire gaming to fulfill my needs for play, try out new systems, and conduct the earliest playtests on new game designs. I’m an advocate of solitaire tutorial adventures introducing core concepts of roleplaying to new gamers. I believe solo gaming also helps fulfill our need to game even when – especially when – we can’t muster a group of fellow players. I’ve written about solitaire gaming numerous times in the past: “Celebrating Solitaire Play,” “The Solitaire Gaming Experience,” “The Gamemaster Solitaire Adventure,” “Solitaire RPG Tutorial Adventures,” “Halthrag Keep Hits the Solo ORS Spot,” and “Curling Up with Solitaire Gamebooks.”

Go out and celebrate Solo Gaming Appreciation Month this November by indulging in some personal time with a solo game. Here are some of my personal favorite solitaire games across the adventure gaming spectrum:

Solitaire Game Books: My missive on “Curling Up with Solitaire Gamebooks” offers a host of recommendations on this front, but I’ll note three you can download right now: the popular Sorcery! and Fighting Fantasy titles now come to life in vivid electronic formats; S. John Ross’s Risus solitaire gamebook, Ring of Thieves, remains a free download from Cumberland Games (or you can order it in print from Lulu); and my own Risus solitaire adventure, Trapped in the Museum, remains a free PDF download at the Griffon Publishing Studio “Free Downloads” page. 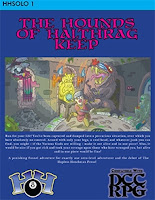 RPG Solo Adventures: Some roleplaying game rulebooks came with solitaire “tutorial” adventures to give readers an immediate way to test out the rules and learn about the setting. Among my favorite solo tutorial adventures are those found in second edition Paranoia, Gangbusters, and first edition Star Wars Roleplaying Game (by West End Games). Other games published full scenarios for solitaire play: Basic D&D’s BSOLO Ghost of Lion Castle and Expert D&D’s XSOLO Lathan’s Gold. The James Bond 007 roleplaying game’s On Her Majesty’s Secret Service, or almost anything for the classic Tunnels & Trolls game. Even the Old School Renaissance movement (OSR) has solo adventure representation with Noah Stevens’ The Hounds of Halthrag Keep, wonderfully evocative of its gonzo Dungeon Crawl Classics atmosphere.

One-Player War and Board Games: More designers are creating solitaire war and board gaming experiences, some of which can accommodate more players if needed. I recently discovered (Your Name Here) and the Argonauts, a winner in a previous BoardGameGeek.com solitaire print-and-play contest; I printed out rules and cards and look forward to giving it multiple tries, especially given the escalating “campaign” mechanics. I bought a copy of Decision Games’ Long Range Desert Group this past summer and hope to find time to give that dedicated solitaire wargame a try. I have a few Minden Games titles like Battle over Britain and Torpedo Raiders seeking some solitaire attention. A few single-player board games come to mind, particularly Castles of Mad King Ludwig, Cards of Cthulhu, and Escape: The Curse of the Temple. Other wargames peer down at me from my shelves hoping I’ll open them up and give them a try solitaire despite the lack of solo rules.

How do we share our enthusiasm for solitaire gaming during SGAM and throughout the year Aside from promoting SGAM on Hobby Games Recce and playing a few solitaire games in my collection, I’ve also put two of my solitaire game PDFs on sale at 50% off: Schweig’sThemed Dungeon Generator (now $1.49) enables gamers to create “weighted” table to create random dungeons on the fly (and offers two ready-to-play examples). Operation Drumbeat (now $2.50) simulates World War II German submarine patrols along America’s east coast in the spirit of Avalon Hill’s classic solo game, B-17 Queen of the Skies.

We can share our game recommendations within the solo gaming community and the wider adventure gaming hobby. Game reports offer insights into solo games and give readers an idea of whether a game might fulfill their solitaire gaming needs. Solitaire play and resources can also encourage others to dabble in gaming. I think November is the perfect month for SGAM. It’s a great time to try new solitaire or group games on our own, test-driving them throughout the month; because toward the end of November America’s Thanksgiving holiday gives us the perfect opportunity to gather with friends and family around the table for a meal, fellowship, and some group games everyone can enjoy.

Want to share your favorite solitaire gaming resources? Start a civilized discussion? Share a link to this blog entry on Google+ and tag me (+Peter Schweighofer) to comment, or visit the Lone Wolf Roleplaying community on Google+ and join the SGAM discussion.
at 7:38 AM