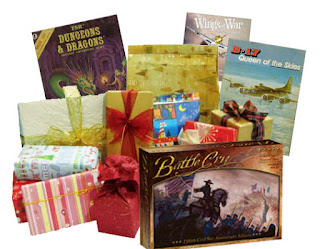 As we dive pell-mell into the holiday season some folks continue their quest to find the right presents for people on their list, each with their own parameters based on relationship, etiquette, interests, and budget. Even gamers can prove problematic since they often have quite exactingly specific tastes in games...and frequently own everything for game lines they particularly enjoy. I’m always looking for ways to draw newcomers into the adventure gaming hobby – both adults and kids – so this season I’ve assembled some low-cost gift ideas for people who might like joining readers at their gaming tables.

Some adult newcomers to gaming might find satisfaction with the many Eurogames and similar fare happily found in such ubiquitous venues as Target and Walmart. Solid standards like Settlers of Catan, Ticket to Ride, King of Tokyo, Carcassonne, Castle Panic, and Pandemic are good go-to games for adults seeking to break into the current popularity of board games, yet their prices tend to run higher than most casual gifts and they’re not always good for younger children. I’ve also featured a few specifically kid-friendly games – Dino Hunt Dice, Rory’s Story Cubes, Set, Dungeon!, Forbidden Island, Stratego Battle Cards Game, Robot Turtles, and the D&D Starter Set – in a similar holiday gift post two years ago; they’re all still valid recommendations.


The games suggested below adhere to a particular set of criteria best-suited to appeal to non-gamers with some interest in gaming. They’re all available for $25 or less (with an occasional, outstanding exception). While these might seem easier to acquire through online retailers, I urge readers to support their Friendly Local Game Store (FLGS) when possible; many can special-order titles they don’t normally keep in stock. They’re all suitable for kids, though more often with adult participation. Most are physical products, though I’ve included one highly recommended PDF (which has a print-on-demand option if you prefer). Most games fall under the category of board games, though a few focus on dice, some rely on cards, and two are roleplaying games. This by no means represents a comprehensive list, but we’ve played them all in our house at some point, occasionally with kids. 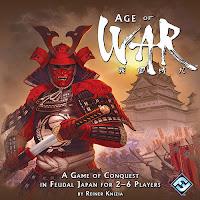 Age of War, $12.95: Notable German game designer Reiner Knizia created this push-your-luck, dice-rolling game with a feudal Japanese theme. Players attempt to match die results with “battle lines” on castle cards to claim them for their warlord. Conquering a set of castles belonging to one clan not only provides a higher score but prevents others from capturing a castle in one’s control. The graphic design behind the two-page rules, castle cards, and custom dice all evoke feudal Japanese elements.

Hey, That’s My Fish!, $12.95: Don’t let this game’s simple premise fool you. Players move their three penguin figures across an ice field of hex pieces to land on ice floes with one, two, or three fish; but they always remove the hex on which they begin their move, causing the ice field to develop holes, fissures, and huge gaps as the game progresses. Players who aggressively pursue a strategy to amass the most fish soon realize the game includes area-control themes as players strive to cut each other off from choice ice floes and isolate individual penguins. 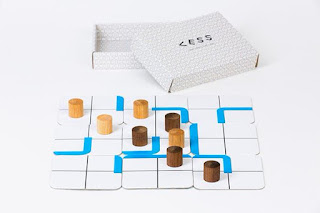 Less, $17: Touted as “like chess but less,” this game offers a challenging two-player abstract strategy game in a small package. The board consists of nine coaster-sized tiles that form a field with square spaces and occasional thick walls. Players set their four wooden pieces in opposite corners and attempt to move them across the field to occupy their opponent’s starting position. Each turn a player gets three moves: moving a piece one space orthogonally or jumping a friendly or opponent piece costs one move; jumping over a wall costs two; and jumping over a double wall costs three. Players re-arrange the board randomly after each game, offering more than 100,000 configurations. The game is only available online, but even with the $5 shipping fee it still comes to less than $25. Visit the game's website to read the rules, look at the different coaster designs for the back of the board tiles, and download a print-and-play version of the game to try before you buy.

The Lord of the Rings: Journey to Mordor, $12.95: This push-your-luck, dice-rolling game incorporates elements from the popular Lord of the Rings franchise. Players take turns rolling dice, keeping beneficial results and trying to mitigate results representing Sauron’s forces as they chart the Hobbits’ and Nazgul’s progress toward Mordor on paper map sheets (included in a pad, but easily reproduced and laminated for repeated personal use). Some player interaction occurs when Nazgul results appear; sometimes they affect the active player, other times they hinder other players based on the color of the die and the Hobbit they choose to play. The game remains ideal for Tolkien fans who otherwise haven’t immersed themselves in adventure gaming.

Minecraft Card Game?, $12.99: I recently featured the Minecaft Card Game? as a nice crossover back from digital to analog gaming. Both the theme and gameplay reflect key elements from the electronic experience, primarily collecting elements and constructing items based on “recipes” found on cards. Player competition centers on collecting specific elements and crafting particular items before anyone else takes them, and occasionally causing other players to lose actions. The price and theme help make this game a good bet for fans of the digital game; I’ve seen copies available in Target, Walmart, and Barnes & Noble stores, so it’s also good for last-minute gifts.

I’ve saved my recommendations for roleplaying game gifts for last; both ignore some of my parameters above, the first coming in above the $25 price tag, the second available as a PDF (but also print-on-demand if you prefer). 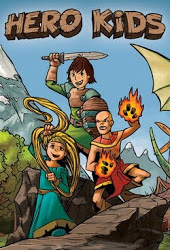 Hero Kids, $5.99 (PDF), $11.99 (PDF & POD): This is the ideal product to introduce kids to roleplaying gaming, albeit with the guidance of a somewhat knowledgeable adult. I’ve featured this game before, once when I admired some of its design innovations when it first released and again when I used it to introduce my six year-old son to roleplaying gaming. Hero Kids uses simple dice mechanics to simulate combat and magic, all while translating typical hack-and-slash fantasy roleplaying game elements to kid-friendly language and concepts. Although it does not come with a sample adventure, one can download several free PDF scenarios online, enough to give creative adult gamemasters inspiration to design their own adventures. I’d also recommend the Hero Kids Monster Compendium (also available in PDF or print-on-demand) to provide inspiration and guidance in expanding your own original scenarios.

Simply handing someone a gaming gift is convenient but often isn’t enough to inspire them to play, let alone dive into the adventure gaming hobby. As we gather for the holidays, don’t hesitate to offer guests the chance to play some of these games to demonstrate the rules, answer questions, and show first-hand how much enjoyment they can offer. Learning a game right out of the box can seem daunting, especially for non-traditional board games. Offer to help people explore their new gaming gifts and join them when they seek players. A game is more than a box with high production-value pieces, boards, and dice; it’s a centerpiece for a pleasant group experience through which we can form positive memories and reinforce bonds of friendship.

Want to share your suggestions for holiday gifts for non-gamers? Start a civilized discussion? Share a link to this blog entry on Google+ and tag me (+Peter Schweighofer) to comment.
at 7:42 AM