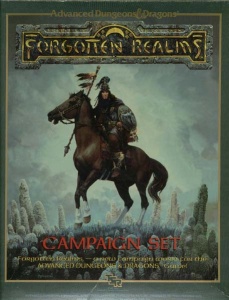 I peer over at my wall-spanning bookshelves (well, one wall of them, anyway) and see a chunk of my Dungeons & Dragons shelf occupied by several thick boxed sets crammed with fantasy world settings. Their names ring boldly in the annals of fantasy roleplaying games: Dark Sun, Raveloft, and Forgotten Realms. Lately I’ve been thinking about getting rid of them. Virtually unseen nearby sit several thin, saddle-stitched D&D modules, some of which provide more localized settings for fantasy adventures beyond the actual scenario material. Some of their names – notably B2 The Keep on the Borderlands and X1 The Isle of Dread – also stand tall in the annals of D&D. I’ve spent more time adventuring in these smaller locales than the vast expanses of the boxed sets and their numerous support supplements. Perhaps these more compact modules offered a young gamer both examples of solid settings as well as the invitation and inspiration to expand upon them. Perhaps I didn’t immerse myself in the larger boxed settings because by the time they were released I’d moved beyond my carefree, younger days of after-school and summertime gaming into a professional life that put a premium on free time.

In TSR’s earliest days boxed sets remained the purview of core game materials. Although I missed out on the box containing the original little brown books loosely defining D&D, I entered the adventure gaming hobby through the Moldvay edition D&D Basic and Expert sets. Other TSR games got the boxed set treatment – Top Secret, Star Frontiers, Gangbusters – but D&D setting material remained relegated to adventure modules and a single folio. The original World of Greyhawk folio offered an expansive gazetteer of all the kingdoms and geographical features on the gorgeous full-color maps; it provided a context in which to situate the existing AD&D modules and create one’s own adventures. The classic module B2 The Keep on the Borderlands offered a small, frontier wilderness map with the eponymous keep, a few nearby wilderness encounters, the Caves of Chaos, and the Cave of the Unknown to develop as one pleases. I know I plotted a few ill-fated adventures beyond the edge of that map. I even created a 10-level Cave of the Unknown filled with all the fantasy cliches I could manage. I have vague memories of drafting plans for a lost Temple of Evil connected to the Shrine of Evil Chaos in the module (though maps or notes have long since disappeared, if they existed at all). X1 The Isle of Dread provided a two-page map of the Sea of Dread and the kingdoms along its northern edge along with the infamous island to explore. I populated islands with lost civilizations and monsters as my players explored the region like Sinbad and his hapless sailors. Even L1 The Secret of Bone Hill presented a small adventuring locale with a base town, notable sites, factions operating in the area, encounter tables, and a ruin to explore.

Toward the late 1980s TSR began developing boxed settings to support the launch of second edition D&D. The company packed all kinds of inspirational source materials into the box: multiple sourcebooks, maps, reference cards, flip-books, even audio CDs. Some like Forgotten Realms, Mystara, and Greyhawk offered traditional medieval fantasy settings. Others expanded the D&D experience with different approaches, such as Dark Sun, Ravenloft, Al Qadim, Planescape, and Spelljammer. Each setting came with a plethora of supplements expanding on elements within the world. I didn’t start buying TSR’s boxed settings until early in my professional career in the early 1990s when I was editing at a newspaper or working at West End Games. Time and focus were at a premium in those days, competing with long, intense work weeks at the newspaper or constant freelance writing to make ends meet at West End. I remember buying the two Mystara boxes because they included the then-novel idea of including an audio CD to enhance the adventures (I’d long been enhancing my home games with soundtracks custom-chosen for the scenario action, easy to do with a large repertoire of Star Wars music). Dark Sun piqued my interest as a setting radically different from D&D’s standard western fantasy. I didn’t find the Forgotten Realms box until years later, in a forgotten corner of a junk shop for a ridiculously low price. Most boxed settings I bought during my West End days when I had a regular stable of gaming stores to visit...and as I recall many such stores put older TSR merchandise on sale or clearance just to move stock.

Of course this debate amounts to different strokes for different folks. Everyone’s entitled to their own preference based on their gaming tastes and experiences. Certainly one can find a region of a vast boxed game world to customize and focus on for adventures; some of those boxed settings do that with campaign-opening scenarios that send heroes toward their fates. Some might argue that detail also provides a framework and inspiration toward more adventures. but more details make keeping track of everything more difficult and establish a setting continuity players are sometimes loathe to violate. One might call it a comparison of macro and micro, comprehensive boxed settings or module folios gamemasters can expand with their own interesting elements. The macro often delves into far too much detail in the subsequent flood of supplements covering information about individual kingdoms or regions, from broad subjects to very specific locations. 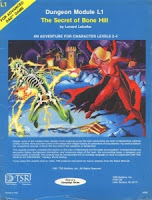 I prefer the smaller, more digestible locales, while others might find greater freedom and inspiration in the massive world-spanning boxed sets. I think my preference comes from the period of my life in which I encountered these different setting formats, an intersection of material available during a prime time for gaming. I immersed myself in B2 and X1 as a teenager in the 1980s when I had plenty of time to read them, adventure within their locales, and expand their potential. I’m sure had I acquired L1 back then I would have done the same. Massive boxed setting sets didn’t start appearing on the market until the late 1980s (with the first-edition Forgotten Realms box), when I was in college and much of my gaming activities were relegated to the summer...and by that time my friends and I were exploring the next generation of roleplaying games that engaged us with accessible rules and popular genres, notably Space 1889, Cyberpunk, and the Star Wars Roleplaying Game. Much as I might have found Spelljammer, Dark Sun, and Al-Qadim intriguing, I had little time to immerse myself in them.

The differences between the two forms also demonstrates how TSR did business at two distinct times in its corporate history. In the earlier days (quite possibly before Lorraine Williams’ hostile takeover and ousting of Gary Gygax) game creators from the earliest campaigns transformed their setting notes and ideas to conform to the adventure module format, with the notable exception of the original World of Greyhawk folio...itself an outgrowth of Gygax’s own game setting. As the company surged toward AD&D second edition boxed sets promoted high production values for campaign settings. Some like Ed Greenwood’s Forgotten Realms grew from gaming personalities, while others no doubt coalesced around the meeting table among designers developing a shared world. With greater production values of a boxed set TSR could garner a higher price and profit to feed its corporate operations. This loosely corresponds to the difference between creators designing game material to their own interests and schedules and the corporate publisher’s need to relentlessly release product to maintain revenue and sustain the company’s infrastructure. For the former less is more, while the latter more is never enough. One might argue if the “more is never enough” model helped doom TSR beneath a flood of returned product in 1997. 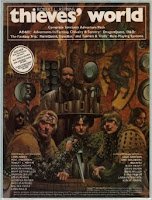 Certainly roleplaying game settings have evolved from my artificial dichotomy of lean module locales and chunky boxed settings. Today boxed settings remain the purview of established and well-funded publishers who can afford to invest in such high production values. They’re more of a rarity these days. Few I’ve seen have inspired me. Bound supplements provide just as much inspiration – in portions more easily digestible for busy “adults” like me – without the high cost (both for the consumer and the publisher). I tried emulating the early D&D modules in my Greydeep Marches setting but, right now, have no further plans to develop it with an aggressive monthly schedule of pricey supplements and adventures. One of the earliest boxed settings I loved as a kid was Chaosium’s Thieves’ World, based on the popular anthologies; it provided a rich urban setting without the need for a host of support product. R. Talsorian released the Night City Sourcebook for Cyberpunk 2020, presented as the print format of dataterm information; though being far from encyclopaedic it provided enough detail to inspire gamemasters and offered enough tone for them to develop different neighborhoods. S. John Ross’ Uresia: Grave of Heaven and Points in Space, Volume 1: Starport Locations not only present inspirational settings but supply entertaining reading. More often engaging settings form the backbone for their own roleplaying games like West End’s Star Wars Roleplaying Game and other media/genre-based fare.

The vast range of settings and the way they’re presented demonstrate the immense diversity of imagination in the adventure gaming hobby. Everyone can have their preferences across the genres – original or media-based, folio or box, generalized or detailed, corporate or hobbyist – and ultimately find something that satisfies their gaming urges at the moment.