Playing at the Fair 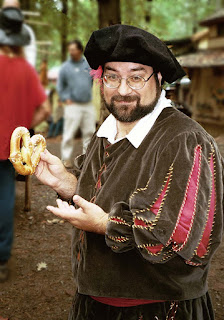 We recently visited the Maryland Renaissance Festival and it brought back memories of how much I used to enjoy the playful immersion in the renfest environment. My adventure gaming hobby stands at the confluence of many inspirations during my youth. I’ve discussed the role music, books, films, and even family vacations played in fostering in me an appreciation of elements that would fuel my gaming activities (“Early Fantasy Gaming Inspirations” and “Early Musical Influences on My Gaming”). Although I went to my first renfest well after I’d discovered Dungeons & Dragons, the experience enhanced my appreciation for roleplaying games, history, music, and literature. Our recent trip back to the Maryland Renaissance Festival reminded me how renfests still provide inspiration for gaming. I also realized how closely renfests mirror roleplaying games (or games in general) in that they provide an immersive experience and a relatively “safe” space in which to play.

I was home from my freshman year at college when I attended my first renfest. The New York Renaissance Faire was my initial taste of the renfest scene and coincided with the time when I have the fondest adventure gaming memories. Over the years I’ve enjoyed other renfests, some substantial, some cozy. In my early professional years before joining West End Games I visited King Richard’s Faire with gaming friends. I vaguely recall going to one in eastern Pennsylvania when I first started at West End. During my “desperate freelance years” in Virginia attending a renfest was a luxury, though I focused my efforts more on gaming conventions to promote my freelancing endeavors. But eventually I drifted back in with the help of some enthusiastic, longtime friends and a wife who’s sewing hobby helped accouter me in appropriate garb (when I was in the mood and it wasn’t too hot). We attended the Maryland RenaissanceFestival several times, took a break when our son was born, and gradually introduced him to the Virginia Renaissance Faire before recently returning to the sprawling festivities in Maryland.

To me a renfest has always been one big Dungeons & Dragons setting come to life...perhaps even more so today with the proliferation of geek-centered media, fan groups, and cosplay. Like roleplaying games, refests provide two things anyone can enjoy if they want to let down their guard a little: an immersive medieval/renaissance experience and a relatively safe space in which to play. Whether attending in garb or mundane modern clothing, attendees can choose – even minute to minute – how much they participate in a renfest’s interactive theater. On our recent visit our immersion amounted to cheering for our favorite knight during all three jousting shows, with plenty of applause and the obligatory “Huzzah!” now and then. Some like to dress up to varying degrees of detail and seriousness, from very basic tunics and hats to die-hard cosplayers dressed as their favorite videogame or film personalities (the guy costumed as Merlin from Excalibur had the intense chrome skullcap and fur mantle...I’m surprised he wasn’t going around muttering the Charm of Making). In the past I’ve worn a “puff-and-slash” outfit similar to those of the German Landsknechte. Some folks even adopt the mannerisms and speech of their intended persona. All this just from attendees. Those hired by the renfest to actually play roles work hard not only when they’re “on stage” but when wandering the fair and interacting in period character with the public. The immersive experience works to a great degree because a renfest provides a relatively “safe” space in which everyone can play.

The fair setting in fantasy roleplaying games – an immersive form of entertainment – also provides a relatively safe space for heroes. Whether massive harvest festivals or the weekly market gathering, fairs need the stability provided by civilized locations with some semblance of law. While not the bread and butter of most fantasy roleplaying games, fairs provide a respite from wilderness exploration and dungeon-delving. Fairs also offer a place to resupply, rest and recuperate, and pursue “downtime” tasks like magical research, martial training, and reconnecting with contacts. Most encounters here are far less lethal than dungeons filled with angry monsters and deadly traps around every corner. They can haggle with merchants over the price of equipment they need. Thieves can work the crowds and see what they can pilfer while avoiding the notice of the local constabulary. Occasional tavern brawls or tests or martial prowess (like jousts or melees) pose the most hazardous threats of bodily harm.

That doesn’t mean fairs provide complete safety and a boring lack of adventure potential. Civilization offers threats far more subtle than those found in dungeons or on the questing trail. Danger and adventure can lurk beneath the festive surface of even the most innocent-looking fair. Has that merchant pawned off a valuable item onto an unknowing character to evade the authorities? What happens when the thief picks a pocket and discovers she’s purloined a potent artifact instead? Do those ham-fisted adversaries in the brawl or boastful knights in the joust harbor a vindictive grudge against characters who defeated them? Do they run afoul of the authorities charged with maintaining order at the fair? Here’s a chance for gamemasters to integrate some sense of the “civilized” lands into the action. Sure, the variety of goods and the diversity of fair-goers can offer some atmosphere reinforcing the greater setting. But the nature of threats in this seemingly “safe” environment can provide inspiration for further encounters – or even entire scenarios – in civilized lands and beyond. 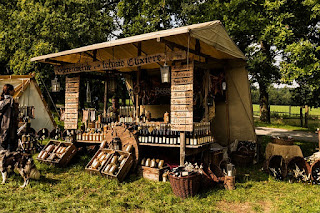 Of course all of this gamemasterly hand-waving means little without some useful material to provide guidance and inspiration. Here’s a sample framework for outlining the central elements of a fair along with an example for quickly developing a fair setting for a generic fantasy roleplaying game. It might not provide more than a quick diversion, but, with character interaction and a few meaningful encounters, might blossom into a full night’s scenario.

Premise: The fair’s name and a brief description, including the location, time of year, and duration, can offer a quick summary and teaser.

Keeping the Peace: Who maintains order at the fair? A sentence or two can describe the constabulary and how stringently they apply the law to fair-goers.

Notable Goods: While one should assume characters can find nearly any mundane merchandise at a fair, list commodities exceptional in quantity or quality for the market.

Events: Note any special events for which the fair is renowned, such as tournaments, auctions, theatrical/musical performances, political or religious ceremonies.

Factions: List a few groups who’s presence dominates the fair (beyond the constabulary from “Keeping the Peace”), exerting their influence to attain their furtive schemes.

Adventure Hooks: Offer a few brief hooks to draw characters into extended encounters or intrigues centering on the fair.

Still, all well and good without some practicalities. So here’s a sample fair following the guidelines outlined above, set near a town from my Greydeep Marches setting sourcebook.

The first week of spring brings canal boatmen, horse herders from the Frigid Steppes, and local horticulturists to the fields outside the town of Thornhedge to sell their wares to travelers from around the Greydeep Marches.

Keeping the Peace: The town council calls up the Thornhedge Provisional Militia to maintain order, usually patrolling in pairs wearing leather jerkins and armed with iron-banded batons. They step in to untangle physical altercations and resolve obvious public safety issues, but avoid getting entangled in verbal arguments and mercantile disagreements.

Factions: Growers Guild, a haughty merchant consortium from Thornhedge that believes it has authority in all matters agricultural; the simple barbarians from the Frozen Steppes who seek to avoid trouble while selling their horses and buying novel goods to take home; the cunning Straigthwater Canal boatmen import a variety of mercantile goods both legitimate and illicit.

Magic Beans: A shady dealer tries selling the characters beans to grow magical healing herb bushes (for a fair price) before a suspicious Sentinel Knight finds him and any associates and carts them away for dealing in forbidden magical items.

Freedom: While touring the greenhouse of horticultural curiosities a crowd of sentient boxwood creatures comes to life, uproots themselves, and pleads for the characters to win their freedom from the haughty Growers Guild.

Equine Treat: A pair of sly boatmen offer to pay the characters handsomely if they visit the horse paddocks and feed the frontrunner in the races a suspicious-looking carrot...intending to repay any betrayal or failure with trouble from other boatmen.

A Dubious Claim: A standoffish elf from Silverfrost Forest claims a distinctive item openly worn by a character was stolen from his tent; he insists on its immediate return or he and his companions challenge the characters to a formal duel in the elvish style.

If you’re looking for another approach to fair settings, one filled with contradictory quirkiness in a far more compact format, check out S. John Ross’ game writing exercise “Workshop 002: The Summer of Love” and the resulting entries (including an anonymous one by Yours Truly). It provides some excellent inspiration for a market fair setting with some specific elements on which to expand.