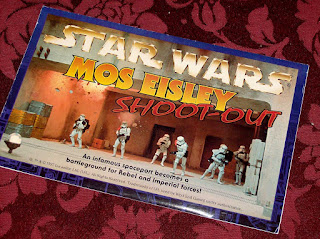 Recently the online classic game store Wayne’s Books posted the “Mos Eisley Shoot-Out” pamphlet under its home page’s “New Arrivals” banner. I always enjoy seeing West End Games material on the site. Nothing tells me more about how the gaming public views a title as the price listed at Wayne’s Books. It’s always nice to know people still appreciate the work we did long ago. Collector’s prices reflect a game book’s physical condition as well as the product quality and the demand among aficionados (and I’m sure a number of other considerations of which I’m unaware). I was somewhat surprised, then, that the 11x17-inch, double-sided, full-color folded brochure mini-game West End published and gave away for free in 1997 was listed at $25.99.

Although the entry for “Mos Eisley Shoot-Out” does not note a designer, I remember working on the brochure long ago. I can’t recall who first came up with the idea. Perhaps I found inspiration in some of the promotional material other game publishers were producing at the time (though nothing comes to mind at the moment, more than 20 years later). Maybe someone from the sales or production staff suggested it. But it came to my desk for implementation. 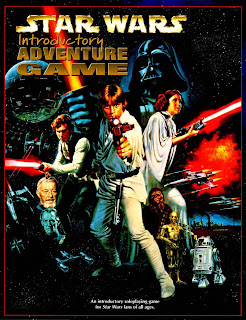 I’ve long been an advocate for encouraging newcomers and kids to get involved in the adventure gaming hobby, first through West End and later on my own. In late 1996 I was busy working on the Star Wars Introductory Adventure Game, a boxed set chock full of goodies to lure newcomers into gaming in the universe far, far away: booklets with programmed solo and gamemaster adventures, maps to spread out on the table, cardstock cut-out figures, and a complete campaign (created by a longtime gaming friend) that escalated both the action and the involvement with more complex rules as the story progressed. The boxed set was published in March 1997...“Mos Eisley Shoot-Out” released sometime in 1997 as promotional giveaway. Both had the same goal: to entice Star Wars fans to buy and play the game. “Mos Eisley Shoot-Out” served as a quick freebie introduction to the most basic game systems, hopefully enough to send players on to one of the more complete versions mentioned in the sales pitch. West End hoped both would capitalize on renewed interest in the Star Wars franchise on the 20th anniversary of the first film’s release and the release to theaters (and eventually DVD) of the classic trilogy’s “special edition” with new CGI improvements. 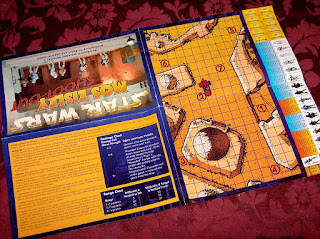 At first “Mos Eisley Shoot-Out” seemed like an “easy” promotional item to pull together, ideal for a company whose management often balked at wasting time and money on freebies. The graphic design folks took a section of Jacquays’ amazing full-color map of Mos Eisley from the original first-edition adventure, Tatooine Manhunt, set a square grid over it, and pared it down to fit on the 11x17-inch flyer as the game board (the map was also included in the boxed Mos Eisley Adventure set published in 1997). The art guys also found original and stock art to reduce and color for the individual character and adversary pieces. It was a no-cost use of existing graphic assets. 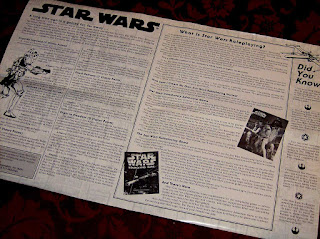 I’d already consolidated the second edition Star Wars Roleplaying Game rules for the Introductory Adventure Game; since “Mos Eisley Shoot-Out” was intended as a more concise product for gaming newcomers, I stripped down the company’s classic D6 System mechanics even further. All the stats had to fit on the tiny back panel of each character stand-up piece. I knocked the skills back to the bare essentials: blaster, damage, dodge, perception, strength, and speed. I somehow managed to explain how all game mechanics worked – including damage and range charts – so it all fit onto the “back” of the folded brochure, at 5.5 x 8.5 inches essentially half a piece of letter-sized paper. Each piece could take two actions each turn: move, dodge, or shoot, an extremely simplified form of the original game’s innovative multiple actions rules. A full letter-sized page contained five different scenarios played out on the space defined by the board map. The back of the map surface – useless during play – served to feature information on the roleplaying game, including hype for the recently released Introductory Adventure Game and full-color, second edition, revised and expanded edition. I recall making sure whatever text was on the other side of the cut-out stand-up figures wasn’t vital (the “Did You Know?” blurb with bits about the Star Wars roleplaying game).

I don’t recall when or where exactly the promotional mini-game was distributed. If it was in the turbulent first six months of 1998 it might have been lost in the flurry of desperate activity. I’ve heard it released at San Diego ComicCon and through Shadis Magazine, though confirming that and the supposed dates of release seems impossible, even given the wide reach and seemingly infinite information available on the interwebzes. The piece has a 1997 copyright date on it, but I don’t recall exactly when it released. It would have been after the March release of the Introductory Adventure Game. Was it in time for ComicCon 1997 or was it completed later that year for distribution throughout the tense first months of 1998 as West End spiraled out of control toward bankruptcy?

The Star Wars Roleplaying Game was always considered one of the more accessible games for fans to break into the adventure gaming hobby...it still maintains that reputation even today. Other staffers attempted to engage newcomers with our games in different ways. George Strayton was instrumental in further distilling the D6 System into a more basic format in the Hercules & Xena Roleplaying Game; I also worked to adapt the introductory adventure game format to the Men in Black license. I don’t recall if we tried producing promotional mini-game flyers like “Mos Eisley Shoot-Out” for other licenses. Non-Star Wars efforts met with little success though the staff was proud of its work on the final publications. Nothing sold quite as well as Star Wars Roleplaying Game material. West End saw film franchises as ready markets of fans; even if only a portion bought into a roleplaying game related to one of their favorite movies, the company might still make enough money to justify the efforts. Some might view the company’s pursuit of licensed properties as contributing to its downfall. Probably. To those on the creative staff it not only enabled us to work on and design material for our own favorite film worlds, but gave us some influence in drawing similarly enthusiastic fans into the roleplaying game hobby.