“The moment we want to believe something,

we suddenly see all the arguments for it,

and become blind to the arguments against it.”

I’m reading Jon Peterson’s The Elusive Shift: How Role-Playing Games Forged Their Identity and cannot help notice similarities between the early debates about aspects of the hobby and the arguments gamers still have about those same issues today. These go beyond the foundational tensions between storytelling and game mechanics one expects between roleplaying games’ early adherents, the wargaming and speculative fiction communities, from which the hobby coalesced. They seep down into the minutia of nearly every base concept of early Dungeons & Dragons...concepts that have over time continued to provoke debate. The adventure gaming hobby community seems just as contentions now as it was 40 years ago; except now, instead of printed APA fanzines and house-organ magazines, most folks argue their points in any number of blogs and forums online (each with its own bias and self-supporting echo-chamber mentality).

The Elusive Shift logically progresses from Peterson’s earlier work, Playingat the World: A History of Simulating Wars, People and Fantastic Adventures, from Chess to Role-Playing Games. This comprehensive history of wargaming documented how the synthesis of that hobby’s community and the genre fiction (read sci-fi/fantasy) community fueled the roleplaying game phenomenon in the mid 1970s. It focuses on the concept that “anything can be attempted” and the appeal that offered to people in both hobbies in drawing them to Dungeons & Dragons. Each community approached roleplaying games with their own biases originating in their own foundational hobbies. One would naturally expect wargamers to focus on the game, while expecting speculative fiction fans to gravitate toward story. Here one finds the basis for the friction Peterson explores in The Elusive Shift: how gamers approached various issues that defined a fulfilling roleplaying game experience for them as individuals and as player groups. 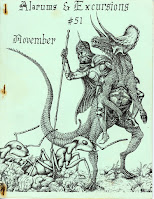 The book focuses on many debates in the pages of APA fanzines of the time – most notably the venerable Alarums & Excursions – with contributors reflecting the experiences and views of different roleplaying game player groups. These demonstrate the wide range of play styles that emerged upon the release of the original Dungeons & Dragons rules in 1974 that continue to remain relevant and even contentious among gamers today. Is it roleplaying within the context of a game, or a game within the context of roleplaying...and usually it’s somewhere between those two extremes of the spectrum. And it’s different for everyone: every game system, every group of gamers, even every player.

Peterson scoured early ’zines for perspectives on numerous issues still debated today: whether and how to best use alignment in developing characters and influencing their actions; speed of character progression; how deadly to make scenarios; the right pace at which to dole out rewards; whether players should make their own die rolls, either for creating characters or in game sessions; player and gamemaster responsibilities. It’s difficult to offer any comprehensive list of topics as the text flows from one debate on certain minutia to another, unsurprising for a game offering such a depth of experience from both the storytelling and system mechanics. The book could have use a list of dramatis personae so readers could better keep track of who was who among those expounding about early roleplaying game concepts. I’d expect each of roleplaying’s “parent” hobbies had their share of interpersonal drama and differences about the finer points of those pastimes. They brought their enthusiasm and rigid thinking into the arguments that “forged” the roleplaying game hobby’s identity. Many debates – as they do today – moved beyond polite discourse into disrespectful, intolerant polemics (seemingly tame in our vociferous age but probably unprecedented back then). There’s more to the book than endless arguments about roleplaying games, but the contentious debates stand out. Peterson presents it all from an academic perspective, examining components of different debates, the core game concepts involved, and how they influenced various groups’ gaming styles.

I consider The Elusive Shift one of those historiographical works that looks back at the adventure gaming hobby from an academic perspective. It has a place on my shelf of similar books about games that aren’t games unto themselves, including Peterson’s Playing at the World, Lawrence Schick’s Heroic Worlds (one of the earliest works), Dungeons & Dragons Art & Arcana: A Visual History, and James F. Dunnigan’s The Complete Wargames Handbook. I don’t expect most gamers to have an interest in books about the hobby, especially when their focus naturally tends toward creating and playing, not analyzing the past or even present issues. Sure, it’s good to step back now and then to examine what works in both design and play with an eye to improving our own game experiences; but few of us have time to do so in a hobby that already can consume a great deal of time and effort. 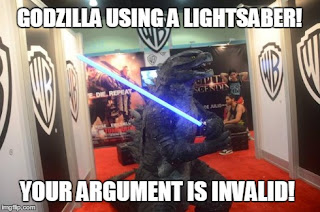 Reading The Elusive Shift I cannot help but think things haven’t changed much during more than 40 years of roleplaying games. The arguments have become more numerous and vehement given the internet’s greater reach than the paper APA ’zines of the hobby’s earliest days. The adventure gaming hobby has always been contentious. Roleplaying games tap into everyone’s very personal creative powers to some extent. Because everyone’s different, each player has a different style of play; finds engagement and satisfaction in different aspects of the game; prefers varying degrees of storytelling and mechanics; and has preferences on a host of other roleplaying game variables. It’s not always easy to accept that different people find enjoyment in different play styles...and accept that their own personal tastes don’t always work for others. It’s about accepting that everyone’s different, sometimes tolerating those differences to reach a common goal – enjoying roleplaying games – and respecting each other regardless of our differences. As I write this I realize these basic concepts of acceptance and respect could easily apply to most other arenas of debate.

Perhaps it isn’t the hobby that’s contentious, but human nature in general. I’m generally in the conflict-avoidance, “Why can’t we all just get along?” camp when it comes to games and lighter debate subjects. I think respectful, intelligent discussion about such issues can help us evolve as people and gamers, assuming we’re willing to evaluate other perspectives in the context of our own views; but as soon as such debate becomes contentious, when one side continually disrespects the other, when we stop tolerating other reasonable views, well, at that point we can agree to disagree and, as politely as possible, walk away to do our own thing without imposing our beliefs on the unwilling.

“People’s minds are changed through observation and not through argument.”