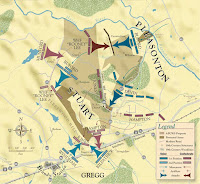 Maps play important roles in many of adventure gaming’s geeky pursuits, such as immersing oneself in a new roleplaying game or reading up on historical military campaigns for wargaming inspiration. Maps play a central role in games: they help describe the adventuring environment for roleplaying games, show how we might set up miniature wargames, and even form the “board” on which we play other kinds of games. So when I see a lack of maps in materials that really need them, I can’t help but think an essential part is missing. The lack of maps in two books that come to mind – one a military history book and another a roleplaying game book – really exemplified this point.

I try to remain positive in my online interactions, so I won’t say specifically which books have disappointed me with their complete lack of maps...but I’ll try to describe how maps should have been indispensable elements aiding the reader’s understanding of the whole work.

The first was a much-anticipated fantasy roleplaying game book by an author I admire and a publishing house I hold in high esteem. Like many such games, it included a setting artfully tied to the tone used to craft the rules, including character backgrounds and the kinds of adventures players might experience. The game devoted a chapter to various locations in the game world, including how they interacted in the broad political meta-plot that could affect the characters and in turn they might influence. A one-page map of the setting would have provided a frame of reference to help me put all the locations in context, a visual reminder of different regions and their characteristics, offered some inspiration for scenario ideas, and served as a board, in a sense, on which a gamemaster or the players could plot their moves. A key impression of the setting was missing, despite textual descriptions and other inspirational artwork illustrating the characters and scenes one might see. (I have since noticed the creators released a map well after-the-fact...quite some time after I first tried immersing myself in the game world and, alas, too late to rekindle my interest.)

The military history book lacking maps proved very difficult to follow. Unlike Osprey books on military actions, this one relied on a solid body of researched text, many first-hand accounts, and some archival photos bound into the glossy center signature. The text covered troop movements in a particular area – towns, roads, rivers, woods, hills – using proper names and directions of attacks, reinforcement, and withdrawal. It made no sense, offered no meaning for the rest of the book, because I couldn’t put all the pieces in a larger context. I understand the graphic requirements of maps sometimes makes them expensive to commission. I could have found a map in my library or online; but maps of the campaign setting or maps covering the movement and location of military action serve as visual aids essential for a meaningful understanding of the text.

Rather than dwell on my recent disappointment, I want to feature some resources with maps that really enhanced my enjoyment and understanding of material conveyed in textual form.

Most military history books know the value of maps. For years Osprey Publishing has produced lavishly illustrated books about campaigns, soldiers, equipment, fortifications, and other military matters from many periods and regions. Among images of historical artifacts, archival photos, and original artwork readers find maps, sometimes images of historical maps, but also maps showing the area of conflict and often the movement of forces across that region, annotated with notes on the action as it unfolded.

While Osprey books remain the ideal military history publications (for me, anyway), two other books I’ve recently read include plenty of maps essential for reference, making them satisfying and informative. In Russell Phillips’ A Strange Campaign: The Battle for Madagascar maps proved necessary not simply to place units in certain locations, but because the island is so completely unfamiliar to me that names alone meant very little. The book provided a thorough account of a little-known operation from World War II, with a focus on the complexities of a pre-Normandy amphibious invasion and a drawn-out campaign against a politically tangled neutral state (Vichy France).

During a recent visit to the New Market battlefield at the Virginia Museum of the Civil War I picked up Sarah Kay Bierle’s Call Out the Cadets: The Battle of New Market, May 15, 1864. Like Osprey books, this one included maps showing every stage of the battle, with unit locations and movements clearly marked in relation to the surrounding geography. It also provided detailed directions for touring battlefield sites. (Alas, the main title font choice, meant to look like smeared blood, was at times hard to read.) 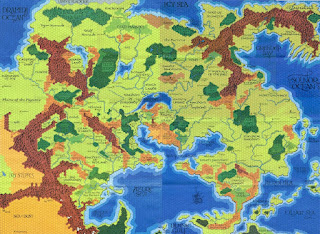 The adventure gaming hobby certainly has its share of impressive maps. Many roleplaying games took their cue from fantasy fiction, where each original setting often requires a world map for readers to follow the main characters through their misadventures. Maps don’t simply compliment the textual descriptions of roleplaying game worlds, they provide visual inspiration, giving player and gamemasters ideas of where they might journey and what quests they might attain. Certainly the maps in the Basic and Expert Dungeons & Dragons modules B2 The Keep on the Borderlands and X1 The Isle of Dread (which included a map and gazetteer for the game world at the time) offered not only a guide for those exploring these regions but inspiration for further adventures; this certainly proved the case in my earliest forays into fantasy roleplaying. Full-color poster maps of such early game worlds as Greyhawk and Tékumel enticed players to send their characters adventuring to far-flung locations with mysterious names or strange geography. The maps in the Thieves’ World boxed set – several small maps, building diagrams in the sourcebooks, and the giant city-spanning map – inspired many hours of after-school play as we explored different neighborhoods and stumbled into numerous misadventures. I’ll grant these maps come from my earliest days in the adventure gaming hobby when I was young and impressionable; but they still bring joy and inspiration to me today. I haven’t invested in many roleplaying games recently, but – lest I seem to wallow in my nostalgia – I’ll note two more recent roleplaying games I’ve acquired, Numenera and Tales from the Loop, both included amazing full-color setting maps on the end sheets.

Rarely have I found a roleplaying game book or a military history publication lacking any map, diagram, or other visual reference to help orient readers...which is why my recent experiences proved so disappointing. In roleplaying games maps provide visual cues for what is essentially a literary activity based on words (both written and, in the case of games, spoken). Military history books need maps to provide context and visual guidance when putting all the textual pieces together. Maps remain essential to understanding any sense of place conveyed through the printed word.