“I don’t regard James Bond precisely as a hero, but at least he does get on and do his duty, in an extremely corny way.” 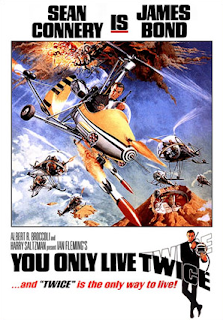 I recently spent an evening watching You Only Live Twice in our makeshift basement home theater: big screen, stereo speakers, quality projector, and sustenance from our “Space Bar.” I used to enjoy all the James Bond films, but in my more discerning older age I prefer to occasionally indulge in a handful of personal favorites. Yes, the plots are convoluted, the characters clichéd, the action over-the-top; but these films embodied an exotic, exciting sense of juvenile adventure that appealed to me in my younger days when a cinematic roller coaster ride mattered more than deep plot and characters. (Alas, I no longer have an appetite for more modern Bond films and their far too convoluted plots and impossible CGI-crammed action sequences that make my head spin.) It reminded me of my occasional dabbling with the espionage genre in roleplaying games, starting with TSR’s Top Secret and further enhanced by Victory Games’ James Bond 007 Game...which I first discovered through one of the supplements that still inspires me today, Thrilling Locations. 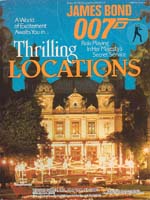 I don’t recall where I purchased Thrilling Locations, maybe at my first PointCon, probably at the hobby store in my neighborhood. No doubt part of my reaction was “Wow, there’s a James Bond 007 Roleplaying Game? I must have it!” At the time it appealed to my interests in the espionage genre as encouraged by the Top Secret game and James Bond films, which, back then, a major television network occasionally broadcast (back in the days before VCRs and video rentals, when network premieres of theatrically released films was one of the few ways to see a movie after its initial release). I immersed myself in its source material on the glamorous locations one expects in the James Bond world and started dreaming up ways to infuse my Top Secret missions with the settings and encounters it provided.

Thrilling Locations covered six settings ideal for espionage action, as frequently demonstrated in James Bond films: casinos, hotels, restaurants, trains, boats, and planes and airports. Each chapter details some specific examples of then-existing locations (most notably Casino de Monte Carlo, Tavern on the Green, and the Venice Simplon-Orient Express), then more generalized notes on the settings, followed by “Notes for the Gamemaster” for integrating it into missions, encounters, related non-player characters, and floorplans. Despite the expected rules jargon regarding the difficulties of various actions and the necessary non-player character stats, it seems remarkably system neutral. Like the roleplaying game (as I’d later learn), the information came peppered with in-universe comments about various locations or past recollections from film characters, including M, Q, Miss Moneypenny, and most of all 007 himself.

With roleplaying games often relying on players’ imaginations to picture the action, the book provided a feast of illustrations. Black-and-white photos and several full-color inserts (provided by the venues themselves ) show off the opulence of specific locations while the text extols their enticing features like a seasoned travel agent. Jim Talbot’s plentiful grayscale illustrations evoked numerous aspects of the James Bond franchise – handsome spies, menacing henchmen, attractive ladies (in the latest 1980s fashions and hair styles) – without rendering images of specific film actors, giving a sense of cinematic espionage action suitable for one’s home game instead of a citing a particular film. Numerous maps and floorplans helped visualize encounter spaces, most notably the yacht modified as the major villain’s secret headquarters).

The encounters for each location really resonated with me. One could roll randomly on a matrix to determine the encounter, but, as with most such random tables, I more often chose something that sounded cool. Each location offered six encounters; for instance, the restaurant chapter had encounters like “Bubbly Surprise,” “Drop In Guests,” “Messy Complications,” “Lovely Surprise,” “Marital Reservations,” and the catch-all “Special.” Text for each encounter first outlined the general premise; “Messy Complications,” for instance, notes a waiter spills something all over the character’s table. Subsequent notes indicate what kind of non-player characters are involved and how they go about resolving the encounter. Thrilling Locations gives them stereotypical labels to more quickly understand their motivations: civilians, fellow secret agents, major villains, privileged henchmen, soldiers (the villain’s generic henchmen), shady contacts, and, of course beautiful foils (of the allied, neutral, and enemy persuasions). So if “soldiers” are behind the “Messy Complications” encounter, they might replace the tablecloth and settings with a bug in the centerpiece, set a small bomb, or try to abduct the character after disorienting him by throwing the tablecloth over his head. In this way each encounter offered several variations from the innocuous to the sinister. This demonstrated how a gamemaster could use a base encounter in numerous ways to introduce or interact with key characters, advance the mission’s plot, or simply provide atmosphere.

Using all these approaches Thrilling Locations didn’t simply present settings as static places but as environments where various espionage elements interacted, agents and villains, enemies and allies all with their conflicting motivations in exotic locales. It encouraged flexibility in using the various espionage clichés of action and character to craft a cinematic game experience. Ultimately my youthful immersion in the James Bond 007 Game taught me how to add greater depth to non-player characters, encounters, plot pacing, and settings than the thin fare offered in most James Bond films.

One might argue that Thrilling Locations – like the classic James Bond films of that era – remains an artifact of its time. The technology remains dated in the late 20th century. The aforementioned fashions and hair styles revel in their time period. Few specific locations mentioned in the book remain (I think Tavern on the Green has closed and reopened under new owners several times). Certainly in these more enlightened times the genre’s male-privileged power fantasy – debonair secret agent, “beautiful foils” from winsome waif to femme fatale, super-gadgets galore, the sheen of innuendo everywhere – no longer seems appropriate. Yet Thrilling Locations still serves as a solid example of a good roleplaying game setting toolkit useful for other genres: outline locations in both specific and generalized senses, with plenty of illustrations and diagrams, give some guidance for integrating them in games, demonstrate this with some evocative encounter options, and offer some non-player characters as either examples or ready made options to fill necessary roles. I’m not sure I’d port it to the fantasy genre, but perhaps somewhere else with locations more universally accessible and similar, yet easily customized for particular scenarios. Perhaps a pulp locations sourcebook with chapters on museums, universities, nightclubs, palaces, excavations, airfields, and docks. One for a science fiction setting could easily impart a sense of the universe’s notable characteristics and themes. At the very least I might find inspiration for a future project’s encounter section, creating a core premise for each encounter with various participants and motivations. Few settings sourcebooks have inspired me as much as Thrilling Locations; I’d like to see more that follow its engaging approach.